When it comes to winter training, you have one of two choices if you live in a place with snow and ice:

Cross-country skiing has become a popular winter cross-training pursuit for triathletes, but it requires expensive equipment, the right location, and a steep learning curve. If you prefer cheap equipment, almost any location, and almost no learning curve, then snowshoeing might be the perfect winter hobby for you. Snowshoe running used to be an obscure winter sport, but has grown in popularity in the last few years. Runners are finding snowshoe running a great way to maintain fitness and have some fun during the snow-filled months.

What triathletes can gain from snowshoe running

A way to stay fit in the winter

Snowshoe running is ridiculously hard – in a good way. The closest comparison is running in deep sand, and if you’ve ever done a race with a section of beach running, you know that it both kills your pace and skyrockets your heart rate. Snowshoeing is very high intensity and very low impact, making it the perfect activity for the off-season, when you’re not looking to put in big hours or bodily harm.

Not only does snowshoe running build cardiovascular fitness, the exaggerated stride and added weight of the snowshoes also help develop leg strength. “The softer surface is a welcome break to the musculoskeletal systems after months of impacting pavement,” said Chris J. Dunn, exercise physiologist, snowshoe running coach, and former director of the Granite State Snowshoe Series. Running on uneven snowy surfaces also promotes muscle fiber recruitment that can be lacking on the roads. And your sore abs the day after a snowshoe run will attest to the demands it places on your core.

While cross-country skiing is often touted as a perfect winter substitute for running, it’s actually much closer to cycling from a biomechanical standpoint. Snowshoeing is essentially identical to running, and best of all, it’s so hard that’s it’s almost impossible to be cold while doing it. Wisconsin-based pro triathlete Jackie Hering has made snowshoeing an essential part of her off-season routine, and it’s part of what has helped her become one of the best runners on the professional circuit over the past few years.

Getting comfortable with the unknown

It can be hard to be the “newbie,” to head into a situation where you don’t feel competent and have no idea how you will do. Becoming uncomfortable with the unknown and embracing the factors that are beyond your control is truly one of the best ways to discover strength inside yourself that you didn’t know was there. Starting snowshoe running is an opportunity to try something new, ask questions, and become stronger.

Snowshoe running can be uncomfortable and challenging, but ultimately it is a lot of fun. “I was attracted to snowshoe running because of the competitive yet friendly community,” said Amber Ferreira, 2014 national snowshoe champion and professional triathlete. “I remember thinking the sport is so hard, but the people make it fun.” 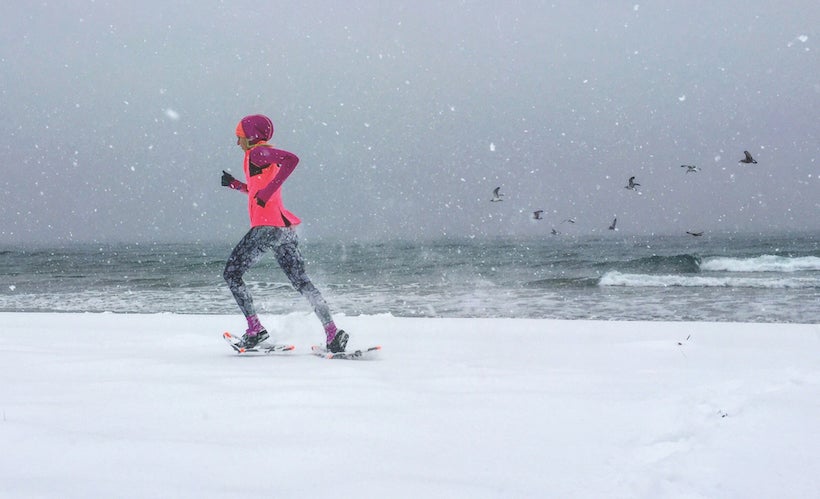 If you already have winter running gear, then the good news is all you need is a pair of snowshoes. There’s a big difference between running and hiking snowshoes, so if you’re looking to go fast(ish), or do races, make sure you get a pair of dedicated running snowshoes. These work great on trails that are groomed, well-traveled, or any trail with just a few inches of fresh snow. If you’re looking to get out in the backcountry in a few feet of fresh powder, you’re going to need hiking snowshoes, poles, and maybe a pair of skis to get down from wherever you’re going.

Finding the right snowshoes is the first step to a positive snowshoe running experience. Many snowshoe races offer the option to rent running snowshoes, so if you’re uncertain about your commitment to the sport, you can easily try it out with minimal cost. But even the very best running snowshoes aren’t crazy expensive, at least if you’re used to triathlon prices. Good snowshoes will cost you about as much as your carbon-boosted running shoes. If you’re interested in competing, or you just don’t like compromising on speed, two of the most popular shoes among elite snowshoers (yes, that’s a thing) are Redfeather Vapor and Dion Racers, both of which sell for about $250. For less than half that, REI can get you sorted in a pair of Yukon Charlie running snowshoes.

All running snowshoes are designed to fit with running shoes, but it’s worth noting that they weren’t designed to work with supershoes with 30mm of excess foam. You’re better off using something much more minimalist while you snowshoe, especially since you certainly won’t need the extra cushioning. You may want to invest in a pair of gaiters to help keep the snow out, and warm, moisture-wicking socks.

Expect to get wet

Since snowshoe running is such hard work, you can plan on working up a good sweat. A good rule of thumb is to dress for the outside temp as if you were going for a road run, and then take one layer off the top. Gloves are always a must, especially since you may take a tumble or two as you try to run over uneven terrain.

Between sweat and all the snow that gets kicked up by your own snowshoes and those of other racers, you’ll wind up pretty wet from head to toe once you stop moving. Pro tip: Have a set of warm, dry clothes waiting for you in the car to put on after the race or run.

As far as snowshoeing technique goes, it’s really not much different from running. One of the biggest benefits of snowshoeing is that it forces you into good running form, because you have to do everything right in order to really get going. It’s nearly impossible to over-stride while snowshoeing, and you’ll find that you have to drive with your arms like never before, which is part of what makes it such a high-intensity workout.

When you’re first getting started, it might be best to do a mix of run/walk, otherwise you might find you can’t make it very far. Don’t be surprised or concerned if you’re only able to cover about half the distance you would in a run. A 5K snowshoe is every much as good of a workout as a 10K run. You’ll be amazed at how quickly your heart rate skyrockets despite a slower pace. You can toss all of your road running paces out the window and focus on running by perceived effort. You can estimate your pace by taking your easy road pace and add one to three minutes per mile depending on the terrain.

Given the chill vibe of the snowshoe scene, you probably won’t be shocked to find out the competitive snowshoe circuit isn’t all that organized. But there are plenty local race organizers—particularly in the upper Midwest—and snowshoe races are essentially free compared to triathlon. Expect to pay about $25 for a race, almost all of which are either 5K or 10K. Even if you’re Ironman fit, you should know that a 10K snowshoe race is a serious pain commitment.

If you’re looking for a race near you, there are a few resources. The Unites States Snowshoe Association (real thing) has a calendar here on their website, and Cute Moose (yes, that’s the real real name) has a ton of races for anyone in Minnesota or Wisconsin.

Dear Coach: How Important Is the Surface I Run On?

How to Start Trail Running

How to Watch the 2022 XTERRA World Championship