In 2014, elite Canadian triathlete Alexandra Coates moved to Guelph, Ontario, to train full-time with renowned coach Craig Taylor in pursuit of the 2016 Rio Olympics. She also decided to take advantage of another opportunity – enrolling at the University of Guelph to earn her Masters degree in Exercise Physiology. But Coates soon encountered the challenge so many age-group athletes face: there simply weren’t enough hours in the day to work and train.

“When I first moved to Guelph, I was training around 20 or 25 hours a week,” explains Coates. “Once I started my Masters program, however, I struggled to maintained the volume and intensity that I knew I needed in order to race at the World Cup and WTS level.”

Coates tried to juggle it all, but found it physically and mentally taxing. As she started to experience the ill effects of too much training and not enough recovery, she became acutely aware of how burning the candle at both ends could result in dire consequences:

“I saw athletes who have experienced overtraining syndrome and were still dealing with the consequences of it many years later. It not only ended their triathlon careers, but has also impacted their ability to perform normal, healthy physical activity as a retired athlete.”

Seeing this firsthand in her fellow triathletes, as well as realizing her own slippery slope of overtraining, made Coates realize something had to give. Though she had an impressive career as an elite triathlete, including four podium finishes on the ITU circuit, she felt compelled to leave it behind to better understand the overtraining phenomenon that affects so many in her sport.

Since then, Coates has run headlong into her studies, publishing seven journal articles on overtraining as a PhD candidate. “I do feel like I am in a good position to study the physiological consequences of overreaching and overtraining,” says Coates. Her understanding of triathletes allows her to design studies that provide more insight into overtraining. It also allows her to “speak the language” of endurance athletes – that is, to take the data and scientific jargon of research and apply it into practical takeaways for the everyday triathletes. 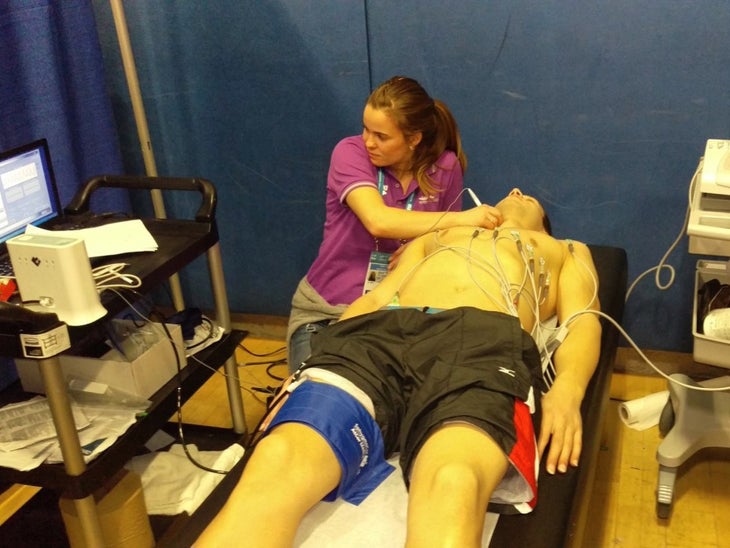 The Science of Overtraining: What the Research Says

Supercompensation may not be so super after all.

Coates is particularly interested in functional overreaching, which she describes as “your classic ‘training-camp’ fatigue” – in other words, training extremely hard (to the point of decreased performance) for two to three weeks, then tapering, for what is known as a “supercompensation” effect. But Coates’ research has found this tactic may not be so beneficial: “While a certain amount of overload is certainly required in order to see improvements to performance, the state of functional overreaching may in fact be less beneficial than if an athlete is simply acutely fatigued prior to a taper. This suggests that the intense training camp fatigue may actually be worse for performance than if you just train hard, but never quite get to the point of reduced performance.”

Coates’ research has given scientific weight to something she often heard from her former coach, Craig Taylor: “Don’t dig holes.” “What he meant by that is if you train yourself into the ground, it takes far too long to get yourself out of that hole than if you hadn’t dug it in the first place,” says Coates. The more research done on overtraining, the more credence is given to the notion that consistency over time is more effective than performing a few blockbuster workouts sporadically.

Your brain knows you’re wiped before your body does.

It’s not just a funk – your pissy disposition is the first red flag of overtraining. “Mood is one of the earliest indicators of overreaching, and will worsen in linear fashion with your stage of overtraining,” says Coates. “Therefore if you are feeling particularly grumpy, or emotionally unstable, maybe sleep in, or adjust your training accordingly.”

The heart is beating out an SOS, too.

“As a marker of overreaching, heart rate seems to be a very good indicator,” says Coates, “At any given workload, your heart rate will be reduced by about 10 beats per minute when you are overreached. This can also happen if you gain a lot of fitness, so don’t confuse fitness with fatigue!” However if you feel like you can’t push yourself, and you can’t seem to get your heart rate to the level it usually is at, you should probably take a few days of recovery.

Coates says true overtraining syndrome is rare – instead, what most people call overtraining is really under-recovery. “Trent Stellingwerff has spoken about this at a few conferences that I’ve attended, and essentially it comes down to idea that often it isn’t the training program that is to blame for under-performance, but rather that the athlete isn’t sleeping enough, are not fueling properly, or is doing too much on their days off,” says Coates. “Essentially you can’t blame the training if it is in fact the lack of recovery that is at fault.”