This week, Wurf shares the results of a recent biomechanical test with us—we explore how you can use his results to fix your own issues.

Over the next two weeks, we’ll take a look at a treasure trove of data collected over a few sessions both before and after Wurf’s third place at Ironman Zurich. We’ll examine some rarely shared data that most pros usually keep guarded. We’ll also bring in independent experts to evaluate the data and give tips on how you can use his numbers to make you better.

Checking their Strava data, however, makes that feeling vanish faster than said piece of cake.

Pros are not just like us. Take, for example, the fact that 48 hours after Ironman Zurich (where he split 4:14 on a bike course with almost 4,300 feet of climbing), when the rest of the competitors were trying their best not to move, third-place finisher Cameron Wurf was out riding his bike—and doing a few hard efforts.

On his post-IM Zurich ride, Wurf was sporting a LEOMO Type-R motion capture system. “We put motion sensors on his feet, legs, and sacrum, which allowed us to look at this foot, leg, and hip motion in real time,” says Sebastian Weber, a pro swim and bike coach who has worked with many top pro cycling athletes.

Weber is the founder and part of the development team for INSCYD, a data-driven software tool that measures metabolic and aerobic function. Weber has agreed to share Wurf’s data with us. This week, we’ll be focusing on the biomechanical info captured by the LEOMO Type-R system—next week we’ll look at metabolic and fueling numbers. In the final installment, we’ll get a glimpse into Wurf’s power stats.

Why should you care about a pro’s biomechanical data? Good question.

First, while wind tunnel testing or real-time biomechanical data may be economically out of most people’s reach at this moment, technology, like water, travels downstream. Someday these things may be available to all. When this happens, you’ll already know what the data means and why it’s valuable, which will make you sound super cool and more informed.

Also, pros aren’t perfect. There are some real things Wurf needs to work on that you probably need to work on too. Even better, you may not need the LEOMO system to tell you that you’ve got one of the same issues that he has.

Wurf warmed up and then rode two five-minute and two four-minute intervals. “We wanted to test him in the aero position to see how he was sitting, whether there were any differences between how he was pedaling with his right or left leg and how things changed at different intensities,” Weber says. Obviously, Wurf was tired because he’d raced an Ironman just two days before. But Weber says that’s useful: Testing while tired is an excellent way to see what your body is going to do at the end of a long event. 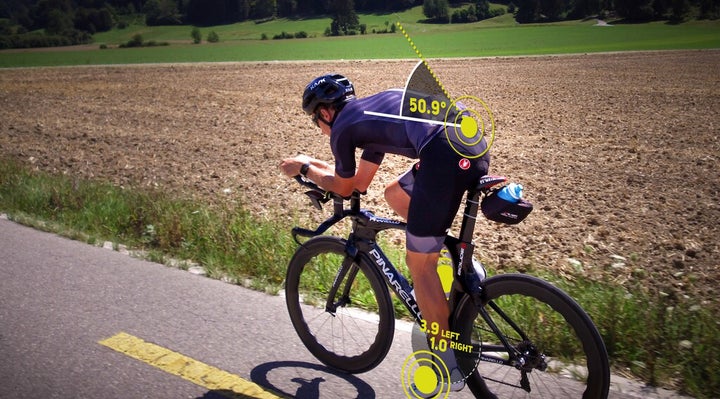 The LEOMO system tracked four main metrics on Wurf, including his pelvic angle—the relationship between his pelvis and the ground—his pelvic rock—the rotation of his hips from side to side—and the stability of his left and right legs. (It also kept tabs on his pedal stroke, but we’re not going to dive into that data for this story.)

Weber says that the pelvic angle is one of the most critical biomechanical metrics on a bike. This is because it shows precisely how much time you spend in the aero position. And Wurf—even though he appears to be in his bars for almost all of a race—isn’t in the optimal TT position as much as Weber thought. “The harder he goes, the deeper he goes,” says Weber—which is actually somewhat unusual. While he’s in his peak aero fold during maximum efforts, he’s sliding back on this saddle and having to right himself when he’s not pushing as hard.

“I call this doing the typewriter,” says Jesse Kropelnicki, a Boston-based triathlon coach. It’s common, he says, and it can sometimes be an indicator of poor bike fit. The best part? You don’t need any equipment to diagnose it. Just pay attention to how often you have to reposition yourself on your saddle. “If it’s once a minute or more, you’re wasting a ton of energy over 112 miles,” Kropelnicki says. Get thyself to a tri bike fitter and stat.

To be clear, Wurf’s pelvic angle is actually really, really good, and his bike fit isn’t bad. “I’m being a bit picky,” Weber says, adding that in general Wurf gets in the aero position and mainly stays there. And when Wurf saw his data, he said it was better than he’d expected. “I was very surprised how good my hip angle and stability was. It’s taken me a very long time and many different bikes to finally find a comfortable aero position.”

Pelvic rock matters too. “For him, it seems to creep up at higher intensities,” Weber says, adding that “it’s slightly increasing during the end of the workout.” Pelvic rock can also be an indication that your bike fit isn’t completely dialed, which is what Weber suspects in this case. But again, it’s super slight. Without tools like the LEOMO system, it would be imperceptible.

Finally, left and right leg instability is something both Weber and Wurf feel they need to keep an eye on. “For him, the main story is keeping an eye on his leg movement at a high intensity,” Weber says. The higher the intensity went, the more unstable he became. This matters, Weber says, because it could be showing that there’s an underlying biomechanical imbalance or flexibility issue. If left untreated, it could lead to an injury.

“I’ve suspected that I had a leg imbalance due to breaking my foot three years ago which was confirmed by the data,” Wurf says. He adds, “The surprise, however, was that my right leg is actually the less stable—particularly at higher power outputs. This suggests I’ve probably been too focused on rebuilding the strength in my left leg to the detriment off my right leg. [It] certainly shows an area for me to improve on ahead of Kona.”

Leg instability may be harder to diagnose without something like the LEOMO system, but Kropelnicki says it’s not impossible. If you can’t get your hands on a LEOMO system, the next best thing to do is to try to find someone who can do a thorough run gait analysis. Kropelnicki says that muscle or structural imbalances will show up on the run too.

Ultimately, paying at least a little attention to your biomechanics on the bike makes sense. For Wurf, Weber estimates that stabilizing his pelvic angle could grant him an extra five watts. “Over the course of four hours, it’s not huge, but it’s something,” he says. Kropelnicki describes it like this: “It’s sharpening the pencil. The whole purpose of this is economy, and if you can make yourself more efficient, you’re spending less oxygen for no return.”

Join us next week for the second installment of the series, where we’ll look at nutritional data from the test and what Wurf’s results can mean for the everyday athlete.

A look at all of the data that went into the analysis:

How a 37-Year-Old Mother of Two Became 70.3 North American Champion

What is Coefficient of Drag—And Why Should You Care?

How (and Why) Cam Wurf Ran a 2:55 Marathon Around His Neighborhood