Leanda Cave the day before the race. Photo: Corey Hollister

An MD explains when to push through—and when to quit—when your body says WTF?

Though every single athlete at this year’s Ironman World Championship suited up with the intention of giving it their all, not every single body was on board with the idea. A host of medical maladies derailed the best-laid plans of the pros, resulting in surprising twists (like defending champion Jan Frodeno walking much of the marathon) and contributing to the DNF count of seven pro men and six pro women that day.

“The mental training of all the worst-case scenarios and ‘what-if’s’ sometimes don’t translate to the unpredictable issues on race day. Kona is unique in that the course on paper isn’t particularly daunting, but the elements—the rough water, crosswinds, baking sun—will find your physical weaknesses, even ones you didn’t know you had,” says Dr. Leah Roberts, two-time Kona finisher and Physician at SteadyMD, the world’s first primary care practice for triathletes.

Many athletes give it their all before waving the white flag of surrender—on race day, obstinacy can be powerful, even when the body is asking “WTF?” But is it always a good idea to push through? Roberts examines what every athlete can learn from a few pros’ DNF stories at this year’s Ironman World Championship. 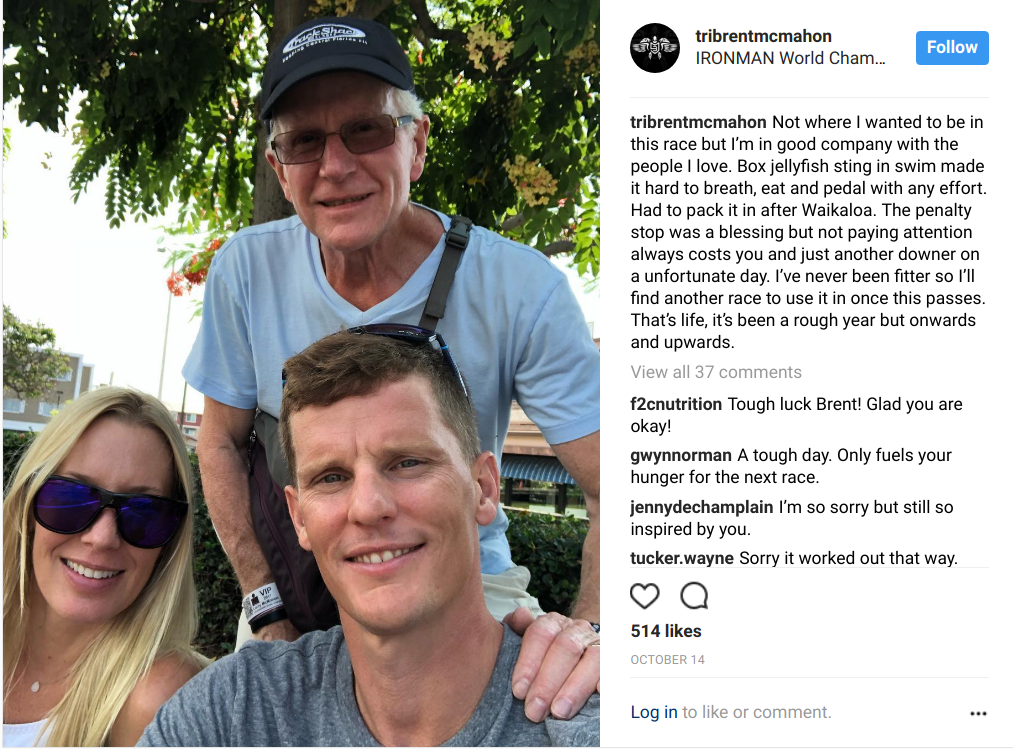 No one, including Brent McMahon, expected a box jellyfish attack in the swim. Though some jellyfish stings can be mild, many are painful—and could even be life-threatening.

“Box jellyfish stings can potentially be very serious,” Roberts says. “Stings are associated with immediate pain lasting up to eight hours, welts, blisters, and localized hypersensitivity reactions, but in severe cases, especially those where 10 percent or more of the body surface area is affected, cardiac arrest, hypotension, and shock can occur.”

For mild stings, one may still be able to continue on, so long as visible tentacles are removed and the sting is treated with copious amounts of vinegar (not urine, which is merely an old wives’ tale). But in many cases, the resulting itching and redness can make racing incredibly uncomfortable. In life-threatening situations, get to the emergency room immediately – an anti-venom administration is necessary. 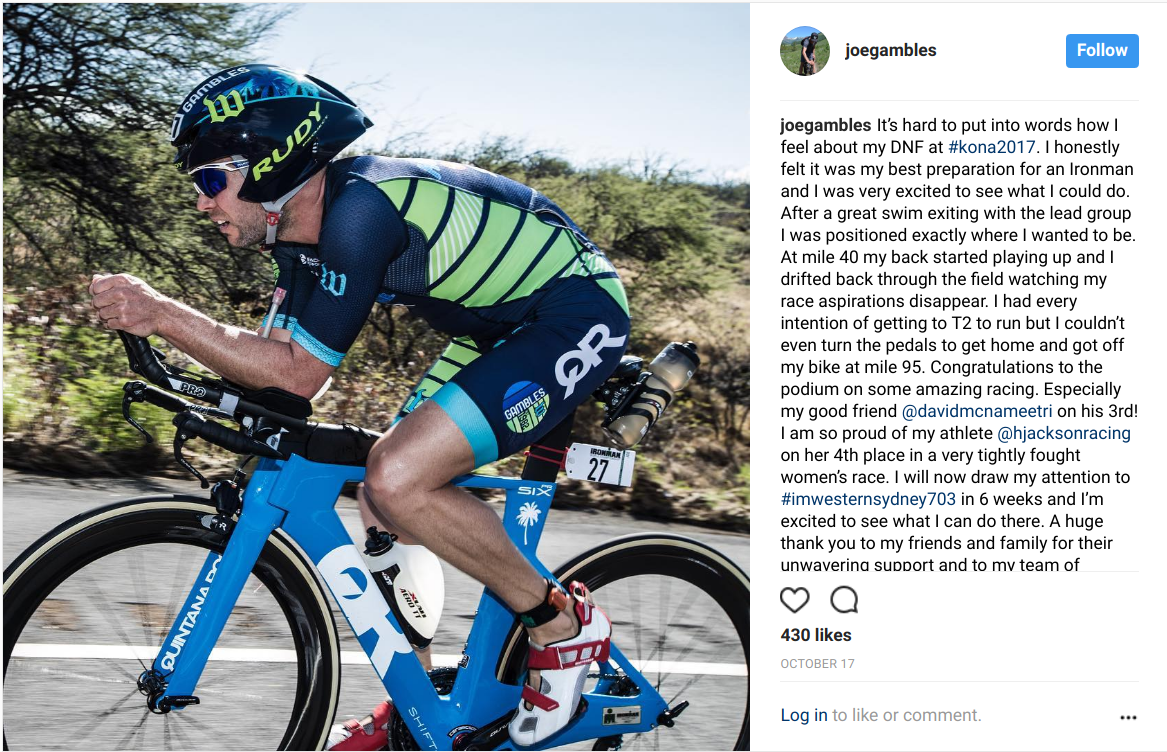 “The swim at Kona is tough—you will be sandwiched between and surrounded by some of the best open water swimmers in the world. In close quarters with rough water, it is common to strain back muscles,” Roberts says.

On the bike and run, back strains can occur on the bike as a result of “fighting” with the infamous crosswinds of the Kona course, which can lead to back strain and spasms (even if the athlete has never had issues before).

In a typical training day, Roberts would advise rest, ART (active release technique) and massage; but all three of those options are impossible mid-race. Instead, she advises stopping to stretch in ways that best alleviate your specific pain (try the lying glute stretch or thoracic spine mobilization) like Frodeno did while walking the marathon course. 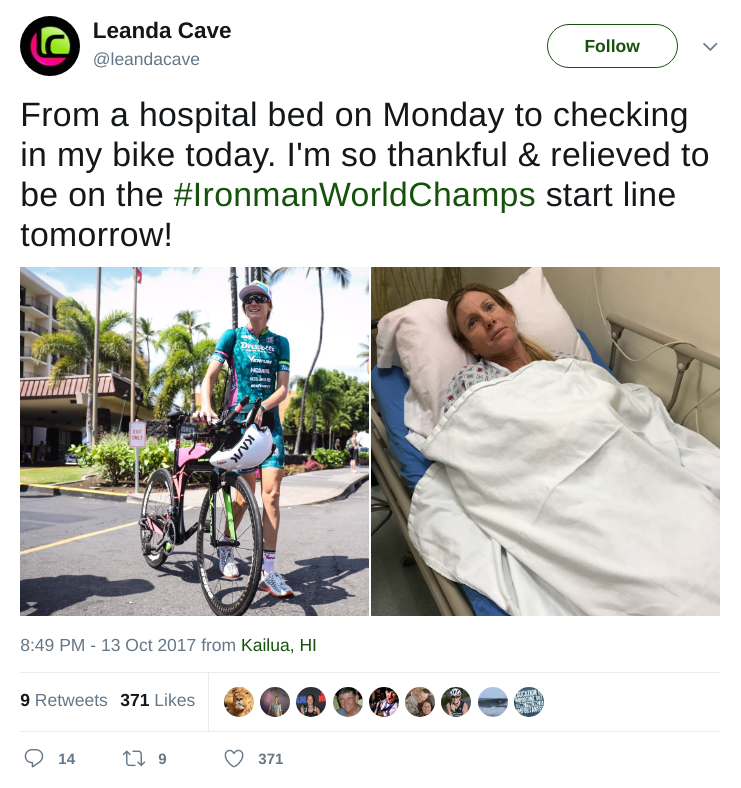 A week before the race, Cave tweeted a photo from the emergency room, where she was receiving treatment for food poisoning. She vowed to toe the line in Kona and followed through—but failed to make it to the finish.

Though the symptoms of food poisoning are brief—most cases last only a few hours to a day—their effects linger. “Food poisoning is a major stress on the body, and it takes several days to weeks to fully recover,” Roberts says. “Replenishing volume losses from vomiting and diarrhea is crucial, as well as restocking electrolytes.”

Roberts cautions against quick fixes, like chugging massive amounts of Gatorade. You may feel better, but that doesn’t necessarily mean you should race. “There is no magic treatment to ensure you are ready for race day.” In a post-Kona race report, Piampiano shared that a foot cramp in the swim progressed to a full-body cramp, leaving her spasming on the ground while vomiting. Could her fate be avoided?

“Cramping is usually a sign of dehydration and electrolyte imbalance. The salt water, wind, and sun are all factors that contribute. You may not be dripping wet with sweat because your sweat is evaporating as soon as it hits your skin and you may notice a white, salty residue on your face or clothes. These are the first signs that one needs to be taking in sodium (electrolyte tabs, drinks with electrolyte supplement, even salty foods). Vomiting can occur secondary to nausea associated with severe dehydration.”

It wasn’t just Kaye and Pedersen who felt out of sorts—even champion Daniela Ryf confessed post-race that she woke up the morning of the race feeling ill. Roberts isn’t surprised—there are a lot of bugs going around race week:

“Unless you live on the Big Island of Hawaii, you will be traveling to Kona by plane,” Roberts says. “Even though you may have avoided sitting next to the sneezing, coughing person on the flight, germs are everywhere: in the cabin air, on the flip down tray, the seat arm rests.

Though it’s hard to manage illness amid race day, it’s easy to prevent it from happening in the first place: Wash your hands, often and at length. Roberts also suggests carrying hand sanitizer and using it regularly.

Should you race while sick? It depends on your symptoms. Many doctors caution against racing with a fever higher than 101, or a cold producing nasty green phlegm. In general, however, let common sense be your guide on whether you should visit the med tent. Though no one wants to take a DNF for a race they’ve trained so hard for, it’s important to remember there will always be more races—but you’ve only got one body. Take care of it, and avoid putting your health at risk.