CNN’s Chief Medical Correspondent Dr. Sanjay Gupta is currently in the middle of training for his second triathlon: the Nautica New York City Triathlon. In 2010, he led a small group of newbies, including himself, to the finish line of that same race. He’s back doing it again with six first-time triathletes in his attempt to promote a Fit Nation.

I met with Dr. Gupta at the Four Seasons Hotel in Beverly Hills earlier this week before he was jetting off to Kona for a triathlon training camp with the 2011 members of CNN’s Fit Nation. While the locale was clearly high class—I could count on two hands the amount of race entries I could pay for versus one night in the hotel—Dr. Gupta was laid back and low key. You’d never know the ubiquitous CNN celebrity was among the crowd. Luckily the conversation centered on triathlons and his passion for the sport only increased my awe of this high-profile television personality. 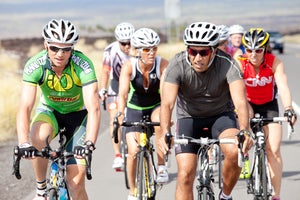 Triathlete.com: In 2010, you completed your first triathlon, which you did with Fit Nation. You say it transformed you “spiritually, mentally and physically.” Can you elaborate?

Dr. Gupta: Physically it’s pretty obvious. I think I’ve been an athletic person most of my life.  But I realized I was sort of doing it in a less organized way. Participating in a single sport, like running, I would fall of the wagon with my overall fitness. So to have three sports to toggle back and forth kept me going.

Spiritually I think it is one of these things that where you go through your life doing things you do everyday: go to work, etc. But doing a triathlon was a definitive “me thing.”  I felt like I had this connection with myself. The event itself was almost a formality. The process of getting there was what mattered.

I think mentally what I have, which I have known intuitively, is that if you are presented with a challenge I don’t want to sit at a desk to figure it out. One of the benefits of exercise is that you can let your mind go elsewhere. I found I had these “ah ha” moments when running, such as a patient had some kind of problem and running would help me process it. I would set my mind to something before a run and all of a sudden while running ideas would come to me.

Triathlete.com: Are you doing anything in your training differently this time around?

Dr. Gupta: This time I am focused much more on running. I was always a runner. I’ve run a couple marathons and I thought that would carry me. But triathlon is a completely different sport than calling it “running, plus two other sports.” Having a background as a runner may have been a little bit of an advantage, but you really have to train for a triathlon. I got through the bike and had some strategies, such as having a pretty high cadence. When I got off the bike I had a little bit of gel still left in the legs and thought I could roll through it. But partway through that run, I had a hard time. I realized I just hadn’t done enough running.

Triathlete.com: So how are you dealing with this? Doing more bricks?

Dr. Gupta: I’m doing more bricks. More running. Ride the bike 10 miles and maybe get off and run a few miles. I’ve been doing that a lot more. I’ve been using salt.

Triathlete.com: Are you using salt tablets?

Dr. Gupta: No. Actually, what is happening is once triathletes are into the race they are starting to get hypokalemic, which is blood going away from the intestines. The blood is going to where you need it, like your arms and legs and so your intestines slow down, which are why some people get nauseated. It’s the same thing with salt tablets. They will just sit in your stomach and are not getting absorbed and so they are not doing you much good in terms of getting into your body. So taking salt packets goes straight into you. There was a physiologist I was talking to at the end of the race and we just started having this conversation and I told him I’ve tried the salt packets a few times and it works and works quickly.

Triathlete.com: You are obviously a busy person and having to travel out of the country for breaking news. You are training for an Olympic distance, which isn’t a short triathlon. How are you able to balance work/training/family?

Dr. Gupta: I wish I could say I’ve been really good at it. But it’s tough when you are in a disaster area and you really can’t workout. So in those areas I really focus on strength training. I can’t go off and go running into a tsunami. There are no gyms. So I bring a jump rope wherever I go. I also have bands. I stretch. I come back maybe not having made any advances in my training, but hopefully not having lost too much either.  Sometimes I run stairs.

Triathlete.com: For Fit Nation, how did you go about selecting the team?

Dr. Gupta: This year there were a lot more submissions. We tried to select people from a large demographic. I think what happens is that people think a lot about their health and fitness and when they see someone on television that is going through the same things they are and having the same problems, they are more likely to be inspired by it. I think our group is really diverse and none of them have done a triathlon before and that was important.

We chose a triathlon because of a lot of conversations we had with medical people and we all believed it was safe. We believed it was healthy. It’s an audacious goal. Everybody was checked out. We talked to them and interviewed them and made sure they were all on board and they all were. So we got them all the equipment they need. They get a bike. They get a membership to a gym. And they get a coach.

Triathlete.com: They are from all over. Is the coach local?

Dr. Gupta: Yes, local. Someone who is involved with triathlons or has done a lot of triathlons, someone involved in that world.

Triathlete.com: So what will you be doing in Kona?

Dr. Gupta: It’s going to be hard core. We are going to have an informal triathlon. They will be meeting triathlon coaches and other triathletes over there that will be working with all of them. They’ll have lectures on endurance, open water swimming, coaches watching every aspect of what they are doing. It’s not a vacation.  They are there for six days and training everyday. But we are mixing it up.

Triathlete.com: So how did your first triathlon experience go?

Dr. Gupta: I had trouble with siding on the swim. So that was frustrating because I wasted time. I think the run was hardest and suffered a bit there.

Also, at the start we were all holding onto this rope and then when we started the person right in front of me kicked my goggles off.  It was humorous in retrospect.

One of the members of the Fit Nation I think didn’t have her wetsuit zipped up all the way and got so waterlogged her wetsuit came down and she was literally swimming with her wetsuit halfway down her body.

I also had to stop a lot during the race. I stopped to help one guy who crashed his bike and thought maybe he had broken his neck. So I stopped for about 12 minutes.

Triathlete.com: How did your children react to their dad becoming a triathlete?

Dr. Gupta: I ran with one of my daughters a bit. She’d run to one end of the driveway and then back. Then she’d stop and say, “Okay, daddy, you can finish it off. You just do your last part.” I really incorporated them into my own activity. With the long training days you are gone a lot and I’m already gone a lot. So we decided to have my kids see me doing something healthy and setting a good example. So we’d go to the park next to the lake and I’d jump in and go for a swim. I’d also have jogging strollers for the run. So they’d see me exercising.

Triathlete.com: Best of luck to you in Kona and with the Nautica New York race.

Find out more information on the 2011 Fit Nation Team and read the team’s training blog.

Check out training pictures of Dr. Gupta and his Fit Nation crew in Kona, Hawaii.

Where is the Fit Nation team training?