As gyms and fitness studios stay closed, it seems like more people than ever are walking, running, and biking—especially outside in the places that it’s allowed. Anecdotally, we’re hearing of a running and biking boom in the U.S. The New York Times reports a ‘back to basics’ running boom and, while bicycle manufacturers are struggling in part because of supply chain issues, story after story after story tells of bike shops seeing booming business (and Forbes even warns us of lessons from previous bike booms).

So what do the numbers actually say? We reached out to a few fitness platforms and looked through some of their reports to find out what kind of activity levels we’re actually seeing.

Garmin’s Report On The Global Pandemic

In early April, Garmin released its first report on the pandemic’s effects on activity levels, which looked primarily at the U.S. Last week, it released a second report on Europe.

Not surprisingly, overall steps decreased in places where shelter-at-home orders limited activity. Yet, also unsurprisingly, indoor cycling skyrocketed. (Imagine a scenario where people are limited in their outdoor activities yet hit the trainer in their living room every day.)

In the U.S., virtual cycling appeared to be up 64% in the second half of March over the first half of the month. (During the same time in 2019, indoor virtual cycling decreased as the weather warmed and people headed outside.) In France, Italy, and Spain, where the restrictions on activity are much stricter, the increases in indoor cycling are much higher. France saw 157% increase in indoor cycling compared to February, Spain 273%, Italy 309%. Interestingly, Garmin reports that the average distance of indoor rides also increased. In one weird quirk, Sweden (which was being used as a control in the numbers) saw a spike in the distance of indoor rides just on March 1—likely as people rode inside in replacement of the popular national cross-country long-distance ski race that was supposed to be held that day. 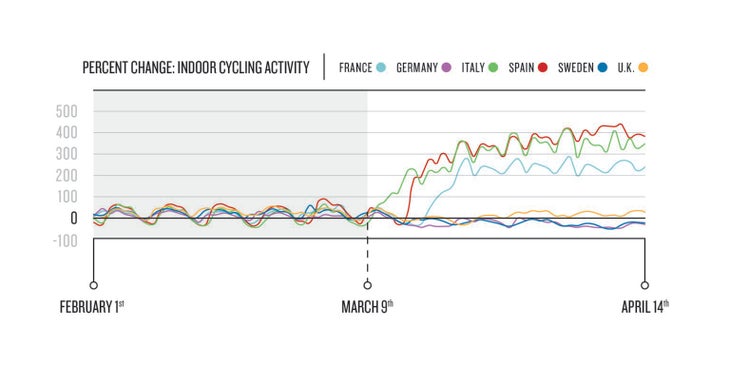 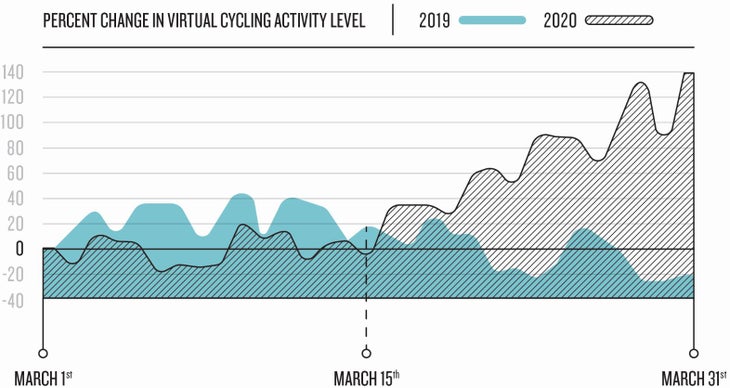 In general, treadmill running actually decreased in the U.S. in the second half of March, as most casual treadmill runners typically hit the gym and gyms shut down around the U.S. But “virtual running” via a platform like Zwift actually increased—one can speculate because the more dedicated runners have treadmills and virtual platforms at home.

This corresponds with numbers we’ve gotten from Zwift. Zwift wouldn’t provide subscription numbers, but would say their public number of peak Zwifters (the most people on the platform at the same time) now sits at 35,000—when the record through this winter was 16,000. They also noted the number of cycling miles being logged daily is now typically over 4 million and some days over 5 million—when at this time last year it was around 800,000. While running is less popular on Zwift than cycling, they also noted a six-times increase in the number of running miles logged daily.

What about the outdoors? In France, Italy, and Spain cycling outdoors became virtually non-existent in April as people adhered to the strict stay-at-home orders. Running outdoors also disappeared in Italy and Spain, where the orders were even stricter. In Germany, there was a 153% increase in outdoor cycling from the previous month, whereas this time last year saw only a 36% increase as the weather warmed. And in places where outdoor running was permitted, Garmin noted runs were shorter as people stuck closer to home.

We asked Garmin why they didn’t include outdoor running and cycling numbers for the U.S. and we were told the trends in the U.S. for outdoor cycling and running were similar to last year and did NOT differ. (One theory: Perhaps those people fueling the outdoor running and biking boom haven’t yet bought Garmin computers.) 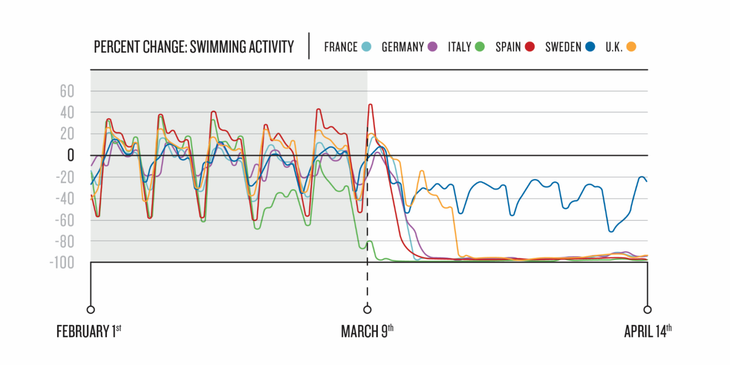 Fitbit’s Numbers On The Global Pandemic

While Garmin’s report looked more at serious exercise and training levels, they did also note generalized fitness activity, like walking and at-home exercise routines, saw increases. Fitbit, however, has taken a deeper dive into more general health and wellness trends. For example, is the pandemic affecting our sleep patterns?

Now in terms of the impact the pandemic has had on overall activity levels, Fitbit looked at global activity and found there was a steep decline in step count in late March, as stay-at-home orders went into effect, which varied from country to country. Spain has the greatest decrease in activity, with the number of steps dropping 38% from a baseline normal. In the U.S., major metropolitan areas saw an average decline of 12% in steps the last week of March—but again this varies drastically from city to city.

Fitbit also attempted to use their data to determine if people are really adhering to social distancing guidelines. They found decreases in mobility were highest among the 18-to-29-year-old age groups. In the US, both San Francisco and New York had steep declines in activity levels. And in Europe, Madrid saw the biggest drop.

So are more people getting active right now?

In some ways, no, people are understandably far less active because of stay-at-home orders. They’re not walking around their office or to the office anymore. They’re not meeting people for lunch or for a group ride. For the most part, they’re taking social distancing seriously and we can see documented decreases in mobility.

But in other ways, definitely yes. All the numbers show an increase in certain kinds of fitness activities—mainly the kind that can be done from your living room or that are permitted as outdoor exercise during quarantine. People are finding ways to keep active even in the strictest of crackdowns, whether that’s indoor cycling, at-home gym routines, or running routes.

The next question will be if all these new runners and cyclists stick with it after the quarantines are lifted. Could we soon see a coming boom in new triathletes?

Strava declined to share numbers with us, saying they’re focused instead on athlete safety right now.