Whether you’re new to the water, have a few years under your suit or you’re a seasoned swimming vet, there’s always room to improve your opening leg.

Swimming is a sport of nuances. You’ve heard that before. Much more so than cycling or running, swimming well requires the right combination of body position and limb movement to get through the water efficiently. And since water is 784 times denser than air, even tiny faults in your stroke can have a big impact on your speed and efficiency.

Making matters worse, it’s impossible to fix everything that’s ailing your stroke at the same time. You can’t focus on swimming with high hips, improving core rotation and proper hand placement all at once. The first step toward overhauling your stroke is to first find that one thing holding you back, and then spend the necessary time in the pool to address that issue.

We asked two of triathlon’s top swim coaches to address the nine issues that most often plague beginner, intermediate and advanced swimmers. Check them out, then get in the pool and go to work.

1. Fear of the open water

How can I get past the mental and physical challenges of swimming in the open water surrounded by hundreds of other nervous athletes?

“Fear is generally derived from a lack of familiarity,” says open-water expert Gerry Rodrigues, who leads a Los Angeles-based swim training program called Tower26. When coaching beginner swimmers, Rodrigues uses the three F’s: moving from fear to familiarity through frequency. “Incorporating specific simulation drills during regular pool workouts, and doing it over and over again, really helps,” he says.

Four of Rodrigues’ favorite simulation drills are: swimming three or four abreast in a single lane; using frequent sighting during all workouts; pace-line swimming to get used to swimming on another athlete’s feet and having your own feet grabbed; and race-start speed drills to become more comfortable with the intensity at the start of the swim.

2. Sinking hips
I feel like I’m dragging my entire lower body through the water. How do I learn to swim with high hips?

“This is a proprioception situation whereby athletes need to grasp an awareness of which muscle groups to engage and at what effort,” Rodrigues says. “The objective is learning to keep the body taut when in a horizontal plane, with three touch points connected to the water’s surface: the back of the head, the butt and the heels.”

Kicking with a board and snorkel (with the board extended and your face in the water) to learn how to kick with the head, butt and heels on the surface.

Vertical kicking (kicking upright in the deep end): “This is a very important drill for learning body awareness,” he says.

As much pulling as the athlete can handle. He recommends using a pull buoy, ankle strap and snorkel to pull with proper body position.

Short and fast intervals, like 25s and 50s, which force the body into a more taut posture.

3. Shoulder pain
One shoulder always hurts when I ramp up my swim yardage. It’s never in both shoulders, but there’s always pain the day after a big session in the pool. What’s going on?

Unless there’s an acute issue in the rotator cuff or AC joint, shoulder soreness or stiffness is often indicative of a problem with the larger muscle groups used in swimming, like the lats and chest, not being engaged properly. “Start by looking at some common swim errors such as crossing over at the midline, or the hand slipping out after entry and pulling wide,” says elite triathlon coach and Arizona State University head tri coach Cliff English. These seemingly minor miscues can put more stress of the rotator cuff and deltoid muscles. Once the error is identified, it’s then time to address it through awareness, drill work and possibly some dry-land strength exercises. “Also, it may help to lay off of the giant, trash can lid paddles,” he adds.

4. Pulling nothing
I feel like my hands and arms aren’t pulling much water. What techniques and drills should I try to improve my feel of the water and create a stronger pull?

“It’s very common for swimmers to have the feeling of ‘spinning their wheels’ with regard to the catch and pull phases of freestyle,” says English. He recommends swimming with both a snorkel and fins so that swimmers don’t have to focus on kicking and breathing and can instead devote their complete attention to the catch and pull phases of their stroke. English also suggests incorporating “feel” drills, such as sculling with arms extended while using a snorkel, as well as the closed-fist drill, which helps swimmers learn to pull with their forearms as well as their hands.

5. Breathing too long
My stroke feels great except for when I breathe. I feel like I stick too much of my face out of the water and take too long to complete each breath. How can I fix my breathing so that there’s a better rhythm to my stroke?

According to Rodrigues, breathing issues are usually symptomatic of another problem. Most often, an extra long breathing cycle is caused by holding one’s breath too long (i.e., releasing the air too late before the next breath), or over-rotation of the hips and torso when turning to breathe.

Rodrigues recommends two easy drills to fix this issue. “Try a simple inhale and exhale exercise against the pool’s wall in a vertical position,” he says. “Inhale, place your head underwater, and then exhale immediately to return to the surface and repeat.” To prevent over-rotation, try a one-arm drill while holding a kickboard from the bottom of the board. “An extended arm holds the board while the other arm executes the stroke. Then alternate arms and breathe every one or three strokes,” he says.

6. Pacing poorly
I go out too hard at almost every race—I can’t seem to control the nervous excitement. Then I’m winded after 400 meters and my pace really suffers for the rest of the swim. How do I learn to settle in instead of blowing up at the start?

“Race-specific training is the only way to mitigate this issue,” Rodrigues says. Many swimmers train specifically for even, steady-state pacing but forget how to do that come race day because of excitement and nerves.

“It’s extremely important to incorporate frequent sightings into these types of workouts, because it can add a lot of fatigue or discomfort if it’s not practiced prior to race day,” Rodrigues adds.

“Adding in some bilateral breathing intervals or drills helps develop good symmetry in your stroke and also gives you time to ‘observe’ your stroke and become more aware of what you’re doing in the water,” says English. He recommends incorporating bilateral breathing into the warm-up and cool-down portions of workouts, as well as during any technical portions like drills and pulling. Most advanced swimmers will be faster when breathing only to their dominant side, so it’s still OK to breathe only to that side for hard efforts during the main set of a workout.

“Being able to breathe on both sides is also a good skill to have during races, when sighting or being able to orientate yourself in a group can be a big advantage,” he adds.

8. Ignoring the draft
I grew up swimming in a pool, and I’m a little uncomfortable swimming in a pack in the open water. I prefer to have clean water in front of me, and I’m usually fast enough to get out in front of a group on race day. Am I missing out on something by not drafting, and what’s the ideal distance to hang off of someone’s feet?

According to Rodrigues, a lack of comfort with drafting is simply due to a lack of experience. “Change the experience, and the outcome changes,” he says. Introduce training sessions that focus specifically on drafting, side-by-side swimming and pace-line efforts, all of which can be done during a typical pool workout. It’s important for triathletes to incorporate some form of group swimming into every session, especially during the race season.

Rodrigues has also spent time measuring the benefit of drafting using a velocity meter and found that drafting off the hip of the athlete in front yields by far the greatest benefit. “Drafting off the hip accounted for approximately an 8.5 percent benefit. Immediately on the feet yielded between a 3 and 3.5 percent benefit,” he says. He noted that the reduction in drag dropped significantly when a swimmer fell one meter behind the athlete in front, and at two meters behind there was almost no benefit at all. 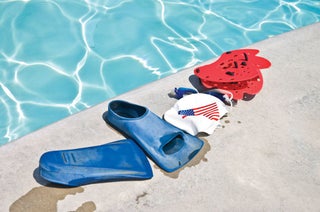 9. Only using paddles
There are a lot of swim toys out there. I just have paddles. Should there be something else in my pool bag, and how much should I use other things?

“Not every piece of equipment works for every swimmer,” English says. “The question to ask is, ‘Why use this tool?’ The answer should not be because it makes things easier.”

According to English, fins are a key “toy” that should be in every swimmer’s bag. They can help maintain a good body position while tweaking more challenging parts of the stroke, like the catch, pull, recovery and hip position. He also recommends a snorkel, which is a valuable tool for developing a symmetrical stroke. “Used along with fins, this can be a great combo,” he says.

English uses caution when it comes to paddles, however. Especially for new swimmers or those with shoulder issues, he advises against them because they might alter their stroke or cause greater shoulder problems. Of course, there’s the tried and trusted kickboard—something that should be in every swim bag, regardless of an athlete’s ability.

Technique Or Tools In The Pool?

Faster Swimming Can Be Simplified Into One Equation