Despite her attendance at every Grand Tour event over nearly a decade, 35-year-old Hannah Grant is sitting out this year’s Tour de France. Just a year ago, Grant’s memorable (non-race) performance in the event was captured on film and made into a documentary adventure series—Eat Race Win—set to premiere this Friday, July 27 on Amazon Prime.

Grant—who calls Copenhagen, Denmark, home—has a lot of cred in elite cycling circles, but not as a rider, coach, or trainer. From 2011 to 2015, she was the traveling chef for the Danish cycling team. During that time, she was on the road for 145 days from March to mid-September, traveling the European circuit with the team. In 2016, she was a consulting chef for South Africa’s Team Dimension Data before moving to Australia’s Team Orica-Scott for the 2017 Tour de France—where the Eat Race Win series was filmed. The show follows Grant and her crew during the 23-day, 2,200-mile race as they source and prepare high-performance meals for the team’s nine riders.

Inspired by Grant’s The Grand Tour Cookbook, the series captures what it takes to balance Michelin star-level cooking with the high-octane dietary needs of professional athletes (elite cyclists consume about four times the amount of fuel that an average person does). Throughout the series, Grant’s entire operation is on the move, starting in Dusseldorf, Germany, and ending in Paris for the famous ride through city streets and the finish line at the Champs-Élysées. Beautifully shot, the series offers behind-the-scenes access to a side of the race many fans never get to see.

Grant’s foray into cooking began in some of Europe’s finest restaurants, where she worked her way up the food chain. She eventually started a catering business and landed gigs at several top European cycling events, where she became known for her work with athletes. When she was hired by the Danish cycling team, she learned just how demanding the job of traveling chef can be. “You live in a suitcase—it’s a nomadic life. But it’s a very special life,” Grant says.

During the 2017 Tour de France, Grant provided two hot sit-down meals (breakfast and dinner) for the Aussie team riders. “Team Hannah”—five people total—used two catering trucks from which they sourced, prepared, and cooked the meals. They were mobile throughout the event, staging themselves sometimes at hard-to-reach points along the course.

Since the athletes took most of their lunch nutrition while riding, Grant supplemented their packaged gels and bars with to-go fuel, such as rice cakes and little sandwiches, and her favorite packable on-course energy booster, “Caffeine Hit Balls” (see recipe below). “We brought in a little variation,” she says.

The most challenging part of the Tour de France, Grant says, is the juggling. “The whole logistics of making everything work. It’s hot, it’s draining. It’s extremely hard on the body.” Additionally, there are dietary guidelines established for a team, but not every athlete falls in line. “It’s not one size fits all. It can be tricky,” she continues. “I don’t come in and change their diets.”

While she relishes all of her amazing experiences as a traveling chef for elite athletes, she’s cut back for now, preferring instead to be near her home and her new puppy. “I can’t imagine leaving her behind,” she says.

But business is still booming: Grant is a regular chef on morning Danish TV, she’s an author, she does recipe development for food companies, and she’s currently working with a partner on a line of nutrition products among many other things. (The day we caught up with her she was catering a 600-person fashion event.)

Will we see her again at a future Tour de France? “It’s a strange thing not to go,” she says, adding that there is a part of her that misses the adrenaline rush: “Kind of like a circus horse that smells the sawdust.”

“Eat Race Win” is executive produced by Grant and Bove, and produced by Junto Entertainment. Prime members can stream the series via the Amazon Prime Video app for TVs, connected devices including Fire TV, mobile devices, and online starting July 27. 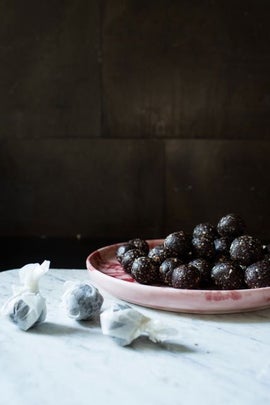 Combine everything in a food processor with the S-blade attachment. Roll into balls or shape as desired. Refrigerate in an airtight container for up to two weeks or freeze for up to three months.

HOT TIP: Add a scoop of natural protein powder into the food processor for an added nutrition boost!

Ask Stacy: Should I Take Supplements?

The Pros and Cons of Plant-Based Eating for Endurance Athletes