Switching to a vegetarian diet doesn’t mean you will automatically lose weight or race times will get faster, but it does have its benefits for endurance athletes. So is it worth it? 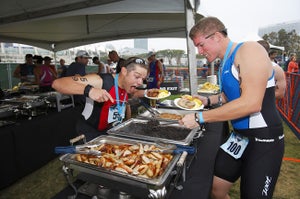 “Being a vegetarian doesn’t guarantee success in sport. However, once you get it right, recovery and muscle functionality go up,” says Brendan Brazier, professional Ironman athlete and author of two books on vegan-based living, Thrive and Thrive Fitness. Brazier believes that vegetarians don’t have to spend as much energy to move muscles. So you can train more in less time. “You don’t hit the overtraining mark as easily as many athletes do. Less digestive energy is used and more nutrients are allowed in.”

Also, vegetarians “tend to put more thought into their food because it isn’t convenient,” says Tara Coleman, a San Diego-based clinical nutritionist. They tend to eat more natural, less processed foods. They then burn their fuel with healthy sources of carbohydrates.

RELATED – Nutrition For Triathletes: Adding Protein Into A Vegetarian Diet


However, trying to follow a vegetarian diet comes with challenges, namely, getting enough protein. “Our culture isn’t built around vegetarianism. Restaurants just take meat out and give you vegetables. They don’t replace the animal products. Protein is extremely important for an athlete.”

To combat this issue, Brazier suggests eating items such as kale and pseudo-grains such as quinoa and buckwheat, which inherently have protein in them. He eats a lot of lentils, beans and a mix of hemp, pea and rice protein.

“I recommend a minimum of 20 percent of your total calories from protein. Everybody is different, but below that I start to see issues with blood sugar and then recovery goes down,” says Coleman. She explains that as an athlete, it is vital to have protein in the diet. Protein breaks down slower than carbohydrates, so you can “keep going and going.”

Vegetarians also may lack iron in the diet, but Coleman says you should be tested by a doctor to see if you are iron deficient. Then and only then, do you need an iron supplement. They also may need to take B vitamins, which are water-soluble. Vegetarians especially need B vitamins because it is not found in any significant amounts in plant-based foods. You can’t overdose with B vitamins either. “All that will happen is your urine will turn bright yellow,” says Coleman.

Brazier recommends starting slow. Don’t do too much too soon. “It’s just like running. You would do a 5K before a 10K. So do not incorporate too many changes into your body all at once.” He also recommends starting any nutritional change in the off-season.

What’s In Your Protein Bar?