The most effective dietary means to increase lifespan may not be practicable for triathletes.

We tend to think of the aging process as something separate from and opposing the processes that sustain our health. If the processes that sustain our health are like a pair of legs turning the cranks on a bike to make it move forward, then the aging process is like the steep hill, the force of gravity, and a gale-force headwind trying to stymie that forward progress.

While intuitive, this way of understanding the aging process is inaccurate. Aging is actually caused in part by some of the same processes that sustain our health, including eating. Two known mechanisms of aging are free radical damage to the mitochondria inside our cells and something called glycation, which happens when rogue blood glucose molecules combine with proteins to form junk compounds that accumulate and interfere with the proper functioning of our organs. Both of these mechanisms are set in motion by the consumption and metabolism of food. Obviously, we need to eat to stay alive. Yet, thanks to these mechanisms of aging, the more we eat, the faster we age. 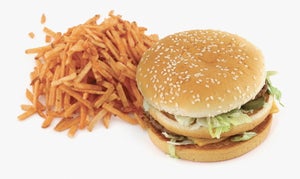 It also works the other way. Scientists have shown that calorie restriction slows aging, reduces the risk of developing degenerative diseases, and increases lifespan in a variety of species, including some of our close cousins in the primate family. It is not yet known exactly how eating less promotes long life, but the picture is being filled in steadily. German researchers recently took another step forward when they discovered that an enzyme known as Prx1 plays a key role. Prx1 protects cell components against free radical damage and also helps prevent glycation. But Prx1 is itself damaged and becomes less active with age. Calorie restriction counteracts this effect by increasing production of another enzyme, Srx1, that protects Prx1 from damage.

A calorie is, of course, a unit of energy measurement. The body’s energy needs are determined by lean body mass and activity level. The more you do in a day, the more energy your body needs to be able to do it. Triathletes make a lifestyle choice to expend a lot more energy than necessary every day. A 150-pound couch potato needs to consume about 2,000 calories daily to maintain that weight. A triathlete who works out an hour a day on average adds another 800 calories to those daily needs. A 150-pound triathlete who trains an hour a day and consistently takes in substantially less than 2,800 calories a day will perform poorly in workouts, recover poorly from training, gain less fitness than he should, and feel lethargic all day long.

More important, exercise itself is also an effective way to boost longevity. It has been shown to slow mitochondrial aging in animals and it reduces the risk of degenerative diseases that shorten many lives. And unlike calorie restriction, exercise not only adds years to one’s life, but it also adds life to one’s years. An athlete who eats more calories than the average person to support her training will have more energy and vitality and will function at a higher level in almost every dimension, from cognition to sex, than a calorie-restricting non-exerciser. Who wouldn’t choose 95 great years over 100 so-so years?

Matt Fitzgerald is the author of Iron War: Dave Scott, Mark Allen & The Greatest Race Ever Run (VeloPress 2011) and a Coach and Training Intelligence Specialist for PEAR Sports. Find out more at mattfizgerald.org.

What Triathletes Are Getting Wrong About Energy Availability

Why You Might Want to Rekindle Your Relationship With Carbs