Forget a magic number. Your body knows when it’s primed for performance—you just have to learn to listen. (Hint: How you think you look in your race pics has nothing to do with it.) Matt Fitzgerald reveals the perils of underfueling and uncovers a surprisingly simple way to weigh in for success.

It started—as these things so often do—with a moment of insecurity. After winning the 2016 Ironman 70.3 World Championship on the strength of a dominating swim-bike combination, Welsh pro triathlete Holly Lawrence entered the 2017 season feeling she needed to prove to her fans, supporters, and sponsors that her breakthrough victory wasn’t a “fluke.” Her subsequent e orts to x what wasn’t broken led to overtraining, which in turn led to an injury, which led Lawrence to eat less to avoid gaining weight while she couldn’t run.

Not only did Lawrence succeed in not gaining weight with her new food restrictions, but when it came time to defend her title in Chattanooga, she weighed several pounds less than the year before—and then proceeded to have worst race of her career. After ceding more than two minutes to the leaders in the water, she dropped out of the race less than halfway through the bike leg. 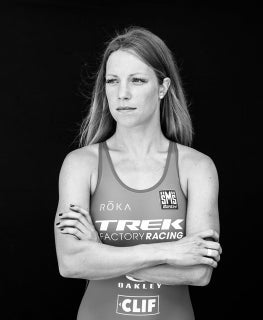 Only later, in a pair of candid Instagram posts, did Lawrence reveal the full story behind her uncharacteristically subpar performance. “I am disappointed in myself for falling into this trap that so many athletes fall into,” she wrote in reference to her period of undereating. “I can see how this can start in anybody and maybe people need to be a bit more switched on about what they say. Body fat does not necessarily correlate to fitness! I raced all season (winning!) at a normal weight for me and I didn’t need to change anything.”

Lawrence highlighted an issue that often gets overlooked when we talk about eating and body-image issues in the sport: Simply putting too much emphasis on body weight and pursuing weight loss the wrong way can be detrimental to performance. It’s an issue that’s perhaps more widespread than triathletes realize.

Just how common a problem is it? According to Chris Willer, a psychiatrist at the University of Toronto and a triathlete himself, there is no specific research that has looked adequately at either the incidence (new cases) or prevalence (existing cases) of an unhealthy fixation on weight among triathletes. But real-world evidence abounds.

“It’s a common and prevalent phenomenon throughout all sports, actually,” says Riley Nickols, who has a doctorate in counseling psychology from Fordham University and is an eight-time Ironman finisher. Nickols treats triathletes and other athletes as head of the Victory Program at McCallum Place in St. Louis, Missouri—an intensive eating disorder treatment program designed specifically for athletes. “But triathletes may be particularly predisposed due to the nature of the sport.”

For starters, body weight is relevant to performance in triathlon—there’s never been a 200-pound winner of triathlon at the Olympics and there likely never will be—so it is both natural and rational for athletes baffling the clock to care about their weight and actively manage it. Additionally, Nickols says, “a prominent feature of most eating disorders is an unbalanced, unwholesome relationship with exercise,” and in triathlon it’s all too easy to fall into a more-is-better mindset with respect to training.

Personality is also a factor: “You’re looking at individuals who are very highly motivated and driven, high achievers, perfectionistic,” Nickols explains. “All of these qualities are needed in some degree to excel in sport, but those same qualities are hallmark features in many people with eating disorders.”

Triathletes tend to be highly competitive as well, prone to measure themselves against others not only in terms of performance but also in terms of physical appearance. “One thing I see with a lot of athletes is that their competitive mindset and comparative antennae are really raised,” Nickols says. “In eating disorders that comparing mindset is amplified even more.” It is often a desire to look more like one’s competitors that leads an individual into the race-weight trap.

This trap is based on the flawed assumption that function follows form—in other words, that losing weight automatically results in better performance. But in reality the opposite is true: form follows function. Only by training and eating for performance do athletes settle into a weight and body composition in which they feel and perform their best.

If being fixated on body weight and taking extreme measures to control it were an effective way to enhance performance, it wouldn’t be a trap. Although some athletes who go down this path do see some initial improvement, in the long run they always end up where Holly Lawrence did during her Ironman 70.3 World Championship title defense.

When calorie restriction is combined with intensive endurance training, endurance performance o en worsens, despite weight loss, due to the stress imposed by failing to meet the body’s energy demands, a phenomenon known as relative energy deficiency in sport, or RED-S. “The long-term consequences of RED-S can be significant,” Nickols says. “Bone density goes down, workout performance and recovery are compromised, and overuse injuries spike.”

Ironically, not eating enough as a triathlete actually makes it harder to lose weight by reducing resting metabolism, the body’s way of fending o starvation. This is true even when you do get enough to eat on a daily basis but merely fall behind on meeting your energy needs for stretches of time during the day, something scientists refer to as within-day energy deficiency.

In a study published earlier this year in the International Journal of Sport Science and Exercise Metabolism, researchers from the University of Agder and the University of Copenhagen looked specifically at associations between within-day energy de cits, suppressed resting metabolism, and hormone levels in a group of 31 male cyclists, runners, and triathletes. They found that 20 of the athletes had suppressed resting metabolic rates (RMR), meaning their body did not burn as many calories at rest as it should have; the remaining 11 athletes exhibited normal RMR. Interestingly, although all of the athletes ate as many calories as they burned over a period of 24 hours, those with suppressed RMR spent almost double the amount of time in energy de cits exceeding 400 calories (20.9 versus 10.8 hours, on average). In other words, though they were technically eating enough, it wasn’t at the right time.

In the same study, higher cortisol levels and lower testosterone levels were observed in the athletes who had the largest within-day energy de cits, an indication that these de cits compromised the ability to recover from and adapt to training.

The most compelling evidence that a form-follows-function approach to weight management works best for triathletes comes not from science but from the real world. Almost without exception, the men and women who have the most consistent and lasting success in the sport are those who eat and train for performance and do not fixate on their weight or take unbalanced measures to get skinnier. A typical case is Heather Jackson, who won the Wildflower Triathlon three years in a row since 2012 and has made the top ve at the Ironman World Championship the past two years.

“I’m not extremely strict with, say, logging my calories and macro- and micronutrients,” Jackson says. “I’ve done that in the past, and I feel that it just adds an extra layer of stress and anxiety.”

Riley Nickols confirms that Jackson’s relaxed approach to weight management is common among athletes who avoid the race-weight trap. “Athletes who navigate this territory successfully tend to have preferences but they’re not absolute musts. There’s a greater spontaneity and flexibility in their relationship with food, an ability to deviate from plans as opposed to really trying to take the reins and force things to happen.”

This is easier said than done, however, for athletes who already have one foot in the trap. While Jackson and other consistent performers o er a good example to follow, recognizing this is one thing, emulating it is another. Both Nickols and Willer urge athletes who spend a lot of time worrying about food and their weight to seek support. “If you are losing physical steam or feeling emotionally drained to the point where you can’t enjoy triathlon, and it’s because of an unhealthy pursuit of an idealized body weight or composition, ask for help,” Willer says.

None of this is meant to suggest that you shouldn’t try to lose weight if you are carrying around extra body fat. You just need to go about it the right way: by setting and pursuing goals with the help of a qualified expert (Nickols recommends that you seek out a professional with a “certified specialist in sports dietetics” credential), or adopting proven best practices rather than going it alone.

Jesse Kropelnicki, an elite-level triathlon coach and author of The Core Diet, offers a key principle to keep in mind throughout this process: “You want to make the smallest e ort possible to get where you want to be,” he says. Severe calorie restriction and diets that eliminate entire food groups are not small e orts. Georgie Fear, a registered dietician who co-authored my Racing Weight Cookbook, encourages triathletes seeking weight loss to focus on making one well-defined habit change at a time, prioritizing modifications that are both doable and impactful. She suggests the following:

1. Replace Low-Quality Food with High-Quality Foods
Processed foods such as snack chips, white bread, and fast-food burgers provide a lot less satiety per calorie than unprocessed alternatives such as dried fruit, whole grains, and sh. Increasing your overall diet quality will enable you to satisfy your appetite with fewer calories. “Reducing desserts, alcohol, and candy, in particular, can have a dramatic effect on body composition,” Fear says.

2. Dial in Your Carbohydrates
While low-carb diets can be an effective way to lose weight, they also rob the muscles of their most potent energy source. Instead of throwing out the baby with the bathwater by simply eliminating high-carb foods from your diet, Fear recommends upgrading your carb sources. “High-quality sources like potatoes, whole grains, and beans help prevent uncontrollable sugar cravings,” she says.

Jesse Kropelnicki also advises that athletes concentrate their carb intake around workouts and prioritize healthy low-carb foods at other times.

3. Listen to Your Hunger And Satiety Cues
Most people in affluent societies such as ours engage in so-called “mindless eating,” which entails snacking in the absence of physical hunger and eating beyond the point of satisfaction at meals. According to Fear, learning to distinguish between physical hunger and mere habit or temptation “corrects problems like eating out of boredom or nerves, while practicing putting down the fork when you’re satisfied can eliminate both overeating and undereating, which equally plague athletes.”

When practicing these habits, just be sure to stay focused on the process, and avoid getting too worked up about numbers and comparisons. If you do start to feel anxious about the scale or the bathroom mirror, take this final piece of advice from Willer: “Remember, if you can, the first triathlon you did. What made you smile when you recall this experience in your mind? Was it the thrill of competition with yourself and others? Was it engaging with a more active and health-conscious lifestyle? Was it the freedom of play that as adults we still long for? Think of the initial spark of what inspired you to be a triathlete, and see if that can be your re-focus, dropping the weight/body focus and exchanging it again for another motivator.”

What Tri Coaches Need to Know About Disordered Eating

The Pros and Cons of Plant-Based Eating for Endurance Athletes