An in-depth look at how skipping breakfast may lead you to eat more and more often.

You’ve been told a million times that you should eat breakfast. Well, I’m here to suggest that you eat not just any breakfast, but a big breakfast. 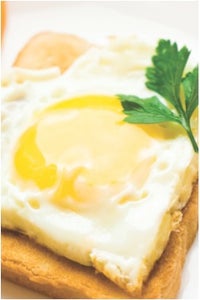 In fact, a study conducted by researchers at the University of Texas at El Paso found that the fewer calories people ate before noon, the more total calories they ate in the entire day. That’s right: The more you eat before midday, the less you are likely to eat overall.

A couple of years ago, Daniela Jakubowicz, an endocrinologist at Virginia Commonwealth University, decided to find out how far she could take this idea. She fed a variety of different breakfasts to women enrolled in a weight-loss program. Those who ate a large breakfast containing 610 calories lost a lot more weight than women given a modest-sized 290-calorie breakfast.

What sort of breakfast has 610 calories? How about two scrambled eggs, a bagel with low-fat cream cheese and a small glass of orange juice? That’s not a Denny’s Grand Slam, but it’s a pretty substantial meal, and certainly more than many people—even many triathletes—eat.

But what about all the fat in those eggs? Believe it or not, new research suggests that a high-fat breakfast may also help you shed excess body fat. Scientists at the University of Alabama recently compared the effects of high-fat breakfasts and high-carbohydrate breakfasts in mice. They found that mice fed a high-fat meal upon waking and a high-carb, low-fat meal later in the day stayed much leaner than mice fed meals in the reverse order, even though total calories were the same. It appeared that eating a high-fat breakfast programmed the mice’s metabolism to burn more fat throughout the day, whereas mice given a high-carb breakfast relied more on carbs all day long.

It remains to be seen how well this finding translates to humans, but even if it translates well, it will never amount to a free license to pig out on bacon every morning and then eat anything you please for lunch and dinner. If you choose to eat high-fat breakfasts, you’ll want to keep the total number of calories within a reasonable limit and include very little fat in subsequent meals. Most triathletes favor high-carb, relatively low-fat breakfast foods such as cold cereal and bagels. There’s nothing wrong with these choices, but you might find that if you add some fat, protein (which is also more filling than carbs) and calories to them that they give you longer-lasting satiety and thereby reduce your total daily calorie intake. This small shift could help you get leaner. For example, spread some cream cheese on your bagel or add some almond slivers and a little milk to your oatmeal.

Now, not everyone likes eating breakfast, and some people who prefer eating small breakfasts or none at all suffer no consequences in terms of managing their body weight. If that’s you, don’t feel compelled to force yourself to eat more. But if you’re like me and you enjoy a good breakfast, it’s the right time to chow down.

Matt Fitzgerald is the author of Racing Weight: How to Get Lean for Peak Performance (Velo Press, 2009, Velopress.com).