An amino acid supplement that is popular with bodybuilders may be better for triathletes.

Amino acids are among the most important molecules in all of biochemistry. The primary job of our DNA is to make amino acids, which are then used to build proteins and to serve a host of functions in the body in their free forms. Of the 20 most common amino acids, nine are considered essential because the body cannot manufacture them. These amino acids must be obtained from food.

Arginine is one of 11 nonessential amino acids. First discovered in 1886, it is found in dairy products, meat, fish, eggs, nuts, seeds, and soybeans. Arginine’s many jobs include assisting in cellular replication, immune function, and wound healing.

Although arginine supplementation is seldom necessary for health, it is popular among exercisers and athletes. The reason is that arginine is a precursor of another compound, nitric oxide, that causes blood vessels to dilate. Expansion of the blood vessels is important during exercise because it allows increased blood flow to the working muscles.

It’s interesting that bodybuilders latched onto arginine supplementation before endurance athletes, because increased nitric oxide production and vasodilatation would seem to be more beneficial to endurance athletes than to bodybuilders. The capacity for oxygen delivery to the working muscles through the blood is an important limiter to endurance performance. Any supplement that increases blood flow has the potential to increase oxygen supply and performance. 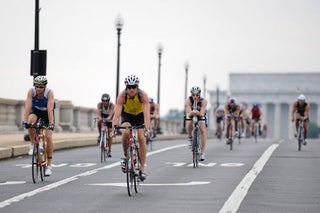 A new study published in the British Journal of Sports Medicine suggests that arginine supplementation may indeed enhance endurance performance. The study was designed by Mayur Ranchordas of Sheffield Hallam University in Sheffield, England. Six competitive cyclists participated in the study. They were randomly assigned to blindly consume either a drink containing 6 grams of arginine or a placebo drink daily for three days. At the end of the supplementation period all of the subjects completed an incremental cycling test to exhaustion (to measure VO2max) followed by a simulated 20 km time trial on stationary bikes. After a washout period the experiment was repeated, but this time those who received arginine the first time got the placebo and those who started with the placebo got the supplement.

Performance in the incremental cycling test to exhaustion was unchanged between the placebo and supplementation conditions. Arginine had no effect on VO2max. However, arginine did improve time trial performance. On average, it took the subjects 32 minutes and 48 seconds to complete the time trial in the placebo condition. After three days of arginine supplementation, their average time dropped to 32:04. That’s a statistically significant 1.7 percent improvement.

How was this effect achieved? It appears that arginine supplementation reduced the oxygen cost of cycling. Oxygen consumption was 6 percent lower in the time trial undertaken after arginine supplementation, even though average power output was slightly greater. Arginine also reduced blood pressure at rest and increased peak power in the VO2max test (from 385 watts to 395 watts) without increasing oxygen consumption at peak power. All of these data taken together suggest that arginine supplementation improved cycling performance by enabling the subjects to generate more power with the same energy (or the same power with less energy).

These findings build on the results of a similar study conducted by researchers at the University of Exeter and published in 2010. In that study, the oxygen cost of moderate-intensity cycling was found to be reduced by arginine supplementation and time to exhaustion at a very high intensity was significantly increased.

If I were a bodybuilder, I would not waste my money on arginine supplements. But for the endurance athlete it’s worth considering.

Ask Stacy: How Can I Deal With GI Distress in the Heat?

The Fine Art (and Science) of Fueling for Hot Races