How they work, as well as why, when and how to use them. 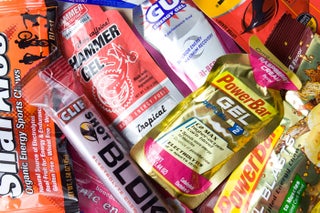 It wasn’t long ago that runners relied solely on water, sports drinks, and maybe some flat cola as their primary carbohydrate supplement during longer races such as half marathons and marathons. Luckily, our understanding of sports nutrition (specifically how glycogen is used during the marathon) has improved to the point that we now have a plethora of products to choose from, each designed to speed glycogen to our working muscles.

The problem these days is not in finding a glycogen delivery product, but rather in sorting through the myriad of possible choices and then developing a strategic nutrition strategy to ensure optimal fueling on race day.

In this article we outline how energy gels and other carbohydrate supplements work and help you understand when–and how often–you should be taking them to ensure maximum performance and optimal fueling on race day.

Your body uses two primary sources of fuel to feed the muscles when you’re running — fat and carbohydrate. Fat is a largely abundant resource, but is broken down into usable energy slowly, making it an ineffective fuel source when running anything faster than about 60-70% of your VO2max (roughly equivalent to your aerobic threshold or marathon pace).

Therefore, your body relies on carbohydrate as its primary fuel source when racing. Generally, the faster you run, the greater the percentage of your fuel will come from carbohydrates. The problem with carbohydrate is that we can only store a limited amount in our muscles — even when you load up. Typically, we can store about 90 minutes of muscle glycogen when running at half marathon pace and about 2 hours worth when running at marathon pace. So, if you’re not an elite athlete, you’ll be running out of muscle glycogen long before you cross the finish line.

Unfortunately, energy gels don’t provide a simple one-to-one replacement (something you won’t read on the label of your favorite gel) because the glycogen we ingest from gels doesn’t always make its way to the working muscles. So why use them?

Because carbohydrate is stored in both the muscles and the blood, your performance on race day relies on using the glycogen stored in the muscle. For glycogen to make its way to the muscles, it must first be digested, make it’s way through the intestinal wall, and then absorbed by the muscles. This process takes time and isn’t very efficient.

However, gels will often “wake you up” in a very noticeable way because our brain only runs on the glucose stored in the blood. As the muscles start to absorb more blood glucose, the brain gets less glucose and starts to get hazy (you’ve probably noticed this feeling on your long runs, or if you’ve gone for a run without eating enough). Often, a gel will wake you up and help the mind feel energized, but it doesn’t necessarily prevent the bonk in your legs.

In summary, energy gels help replenish the glycogen and calories you’re burning when racing hard. However, they aren’t very efficient or a simple one-to-one replacement, so timing and frequency are critical factors to avoiding the bonk.

When should you take them?

Like almost every other facet of running, the timing of when you should take your gels is very individual. Each runner absorbs and processes carbohydrates at a different rate — some can feel the effect within three minutes while others might take up to 15 minutes.

This variation in absorption rate has to do with how well your stomach reacts to the gel. When running hard, your body often diverts blood away from the digestive track to help your legs continue to move forward (your body naturally conserves resources). Sometimes, however, your body shuts the stomach down completely while other times it just slows down. This is why it isn’t uncommon to see runners throw up fluids or gels right after ingesting them late in the race.

Therefore, you want to begin taking gels relatively early in the race. By taking the gels early, your body shouldn’t be under great duress and you have a better chance of processing the sugars faster and without stomach issues. I suggest taking your first gel somewhere between 45-60 minutes, depending on how well you generally react to gels in training.

Some runners like to take a gel right before the race starts. While there is no problem with this from a physiological standpoint, I find it better to consume a more substantial breakfast, with less simple sugars. This helps you avoid eating nothing but simple sugar for 3-4 hours.

How often should you take them?

As mentioned earlier, the speed at which you’re able to digest and process energy gels plays an important roll in how often you want to take them. Because the digestion process will be slowed or halted the further you get into the race, you need to be careful not to overload your stomach. I suggest waiting about 45-60 minutes between gels before taking another one. Most runners should be closer to the 60 minute mark, especially if they have sensitive stomachs.

The other aspect to keep in mind is that your digestive track is trainable like most every other part of your body. So, if you eat gels in training, particularly if you do it at set intervals that correlate to when you will take them during the race, your body will learn to keep the digestive track running and you will digest the gel more readily. This is why it’s critical you practice your exact fueling strategy as often as possible in training.

Now that we’ve covered some of the basics of how energy gels work and how to properly strategize a marathon or half marathon nutrition plan, we’ll cover some practical tips that can help you execute on race day.

1. How to take energy gels if you have stomach problems:

Like we’ve discussed, it’s possible that your stomach might shut down during the latter half of the race. If this happens to you and you’ve been unable to take energy gels late in the race, try eating only a small portion of the gel, but in closer intervals. For example, eat 1/4 of the packet every 20 minutes. You’ll still consume the energy you need, but you’ll give your stomach a better chance to properly digest without getting sick.

Epic Bonk? Dig Out With these 12 Emergency Convenience Store Foods