One of the worst things about the sport of triathlon is the typical 7:00 am start time of races. It wouldn’t be so bad if you could wake up in a room located within walking distance of the start line at 6:50, step outside, and go, but that doesn’t work.

Trust me, I’ve tried it. Several years ago I raced the Los Angeles Triathlon. The night before the competition I stayed with a friend who happened to live within walking distance of the start line in Santa Monica. Somehow I managed to sleep through two alarms. When my host came into my room to rouse me, it was 10 minutes before my wave start time. I threw myself together, dashed out the door and sprinted to the beach. Having missed my wave, I joined the next, the only blue swim cap-wearing fool in a sea of green swim caps.

I did not have a good race. The main problem was not that I had missed my usual warm-up or that I simply hadn’t been awake long enough to function well; it was that I had been forced to skip breakfast. 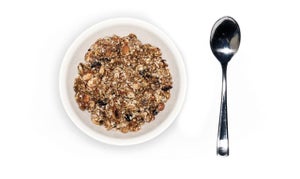 The pre-triathlon meal is important. It has a couple of important jobs to do. The first job is bringing your liver glycogen stores and blood glucose concentration up to top levels. During the night your body’s precious carbohydrate fuel stores are reduced by your nervous system, which runs on glucose. Therefore when you wake up after the overnight fast your liver glycogen stores and blood glucose concentration have been brought down to levels that are less than optimal for finishing a triathlon. But a high-carbohydrate meal can restore those fuel reserves in a jiffy.

When you wake up in the morning your body is also not in the ideal hormonal state for racing. In Hardwired for Fitness, authors Robert Portman and John Ivy point out that, first thing in the morning, before breakfast, large amounts of the stress hormone cortisol are flowing through the body. A high-carbohydrate meal brings cortisol levels down and releases insulin, the fuel-injection hormone that delivers carbs to working muscles during a triathlon.

It takes a fairly large amount of carbohydrate to do these jobs optimally. Research supports 150 grams, or 600 calories, of carbohydrate intake in the pre-triathlon meal. The problem is that it takes a little time to digest and absorb that much food, and it is important that the pre-race meal be cleared from the stomach before the race starts, or you’re likely to experience GI distress during the race. Most experts recommend consuming a pre-triathlon meal of that size three hours before the race start. That means 4:00 am, if your wave starts at 7:00. Ouch!

But what about sleep? Isn’t that important too? There’s the rub. It’s next to impossible to maximize both pre-race fueling and rest before an early-morning triathlon. Some triathletes creatively work through this conundrum by setting two alarms for different times. They set one for, say, 3:00 am. Upon hearing it they sit up in bed and eat a banana or drink a high-carb meal replacement drink. Then they go back to sleep and wake up again, for good, when the second alarm sounds at, say, 5:00 am. At that time they consume a second dose of carbohydrate. This way they get something close to the maximum amount of carbohydrate and the maximum amount of sleep.

The only problem with this strategy is that pre-race nerves prevent some athletes from falling asleep again after that first alarm goes off. But if nerves are not a huge issue for you, this approach may be worth a try.

The only other alternatives are sacrificing sleep and sacrificing carbs. That is, you either “sleep in” and necessarily consume a smaller pre-race meal (say, 75 grams of carbs two hours before your waves start) or wake up an hour earlier to eat a larger meal. You must make this choice based on your individual needs. Let’s look at a historical example of what I mean.

The past year of my life was spent learning everything I could about the legendary triathletes Dave Scott and Mark Allen for my newly published book, Iron War: Dave Scott, Mark Allen & The Greatest Race Ever Run. Now, Dave Scott was known for his huge appetite—his hollow leg was a major theme in many of the profiles written about him in the 1980s. Mark Allen, on the other hand, was a huge sleeper—his 10-hours-a-day habit was the theme for one Sports Illustrated article about him. On the morning of their epic showdown at the 1989 Ironman, Dave Scott woke up at four o’clock and ate three slices of dry toast and three bananas. Mark Allen woke up an hour later and ate a much smaller breakfast. Both men broke the Ironman course record by more than 18 minutes that day, in part because each had done what was best for him.

So, the question to ask yourself in planning your pre-triathlon meal strategy is, essentially: “Am I like Dave Scott or am I like Mark Allen?”

Matt Fitzgerald is the author of Iron War: Dave Scott, Mark Allen & The Greatest Race Ever Run (VeloPress, 2011). He is also a Coach and Training Intelligence Specialist for PEAR Sports. Find out more at mattfitzgerald.org.

Ask Stacy: What is Rebound Hypoglycemia?