Triathlete Senior Editor Aaron Hersh is in Friedrichshafen, Germany at Eurobike taking in all of the new 2011 triathlon gear. There were quite a few surprises on day one. See a photo gallery from the day and then scroll down to see detailed descriptions of Hersh’s findings. 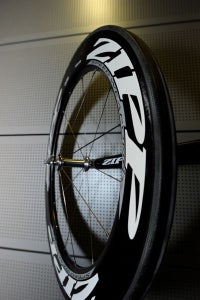 Zipp totally changed the way they approach aerodynamic rim designed when they introduced a brand new rim shape—called Firecrest—about three months ago. Zipp has trumpeted the benefits of this shape and they have the data to back it up but, at the time, only the 404 Carbon Clincher was built with the Firecrest shape. The obvious question was, “when will the rest of the line be built with this new rim profile?”

Zipp answered that question today when they released the 808 Carbon Clincher, 808 Tubular and 404 Tubular Firecrest wheels.

The Firecrest rim profile is 27mm wide at the brake track—most wheels are 19mm wide—and their widest point is about 70% of the way down the rim, toward the spokes. The bulbous shape certainly doesn’t fit typical assumptions of what is aerodynamic, but Zipp asserts that it is in fact a dramatic improvement over their older wheels and this drag difference is primarily due to the drag created by the back half of the wheel.

Many aero wheels are designed to reduce drag at the front-most part of the wheels—where the tire first hits the air—because it strikes un-touched air, but the inner diameter of the rim is also a leading edge at the back side of the wheel when riding in a cross wind. The Firecrest profile creates much less drag on the back half of the wheel than Zipp’s old rim shape and many other aero wheels. The result is a 110 gram-140 gram drag reduction at 15 degrees of yaw over Zipp’s previous 808’s. Zipp estimates this is worth about 12-15 watts. The new 808’s are only drastically faster than the old version at yaw angles greater than 10 degrees, which is a very common circumstance for age groupers. Josh Poertner, Zipp’s lead engineer, says that the Firecrest 808’s are even faster than the deeper Zipp 1080’s at these high yaw angles.

Poertner says that the Firecrest 808’s have a lot to offer beyond their aerodynamic characteristics.
• They are very impact resistant.
• Their shape reduces the chance of pinch flats.
• The Firecrest shape prevents wind from turning the fork and steering the bike off course. Increased stability.
• The clincher version has the smooth ride feel and grippy cornering feel that comes with a wide clincher bead.

The tale of the tape: 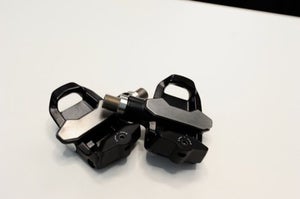 The biggest surprise of the day was the announcement that Look and Polar have been collaborating on a pedal-based power meter to be released late spring, 2011. Look put strain gauges—the component that directly measures flex, which is used to calculate power—on both pedal spindles and Polar wirelessly transmits that data to their computer head units using their proprietary transmission system. It will measure power from both legs, which allows it to accurately measure power and provide a right/left leg power differential to help the rider even their pedal stroke. It will be the only power meter that displays this information on the road.

Keo Power will be accurate to within 2%, which is similar to SRM, Quarq and PowerTap accuracy. The entire system will add 150 grams to the Keo Carbon Ti pedals and will not be available on Look’s top-shelf Blade pedals. It will be compatible with cranks ranging from 170mm to 177.5mm in length and will cost between $1,500 and $1,800 Euros (roughly $1,800-$2,200 USD). 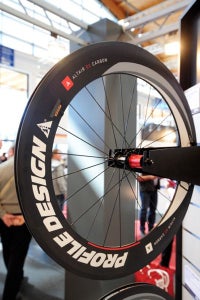 Profile Design has entered the race wheel market with the Altair Carbon series. They will have tubular, carbon clincher and aluminum clincher version of 80mm and 52mm deep rims. The rims have internal nipples and straight sidewalls. They are 22mm wide at the brake track, which helps air transition smoothly from the tire onto the rime in order to reduce drag and are built with Profile’s own minimalistic hubs.

Louis Garneau released the Vortice, a new aerohelmet with a totally unique design. Its shape is similar to existing helmets but the tail has been chopped off and there is an open hole where the tail would be. There is a large vent at the front of the helmet and Garneau says the hole at the rear sucks air through the inside of the helmet to create a faux tail that effectively extends the tail and reduces drag.

Ridges at the crown of the helmet create vortices, hence the name, that allow air to stick to the helmet and reduce drag, according to Garneau. 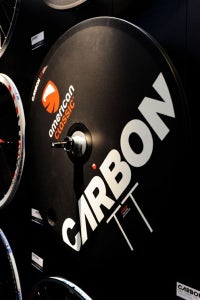 The Florida-based wheel designer released their first disc wheel, the Carbon TT. It is 22mm wide, for a smooth transition from tire to rim, and has flat walls. It is built with a nomex foam core and basalt braking surface. The all-black brake track transitions elegantly into the carbon weave surface and creates an aesthetically clean and eye catching surface.

For 2011, American Classic hubs will be built with an aluminum body (to keep the weight light) and two steel portions to keep the cassette firmly in place and prevent notching on the freehub. All-aluminum freehubs tend to wear quickly because the metal is softer than steel. American Classic’s innovation keeps their hubs feather-light without compromising durability.