While most watchmakers are consolidating measurement tools into their triathlon watches, Polar has zagged against the trend. Instead of integrating GPS into the RCX5 watch body, it uses remote pods that combine to track just about every relevant piece of swimming, cycling and running data that a triathlete could want, other than cycling power. But so do several other GPS watches. The RCX5’s method for tracking performance and a few unique features differentiate it from the other wrist-top multisport computers. 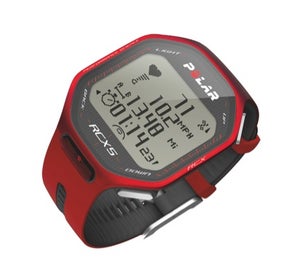 In addition to the GPS pod, the RCX5 comes with a foot pod, heart rate monitor, and cycling speed and cadence sensors that all communicate wirelessly with the watch. Display pages can be set to show a wide range of standard speed, distance and heart rate functions, including swimming heart rate (if you can get the strap to stay in place). Instead of hitting a lap button, the RCX5 can be set to change display pages or mark a lap simply by waving the watch next to the heart rate strap.

The RCX5 doubles as a functional everyday watch and multisport tracking tool because the GPS components are kept separate, which allows it to have a slimmer profile compared to other bulky GPS-capable watches. Plus, instead of needing a charge every night, the RCX5 holds juice like a standard watch.

The GPS pod is a little smaller than a gel pack and communicates seamlessly from a hydration belt, running shorts pocket or included armband (we found the connection to be less reliable from a cycling jersey). It can withstand water and can be used to track an open-water swim. The RCX5 updates running speed within approximately eight seconds of a change in pace. We found the GPS pod measures distance to within 1 percent accuracy while both cycling and running when compared to wheel-measured distances.

What Our Editors Used and Loved in August