Remember the self-lacing Nike shoe from “Back to the Future”? Along with the Tennibot (an automatic tennis-ball collecting robot), self-driving cars, and a prototype washer-dryer that automatically folds your clothes when it’s done, it was one of the many wonders at the 2018 Consumer Electronics Show (CES), held last week in Las Vegas. Among the souped-up sporting goods and wearables were some innovative bike and run products designed to make your training safer and more efficient. Here are our five favorite finds.

A Treadmill Class in Your Living Room

Peloton, the live, at-home subscription cycling class that requires the purchase of a $2000-TV-enabled spin bike, used CES to announce Peloton Tread, a running class with weights. Like its bike classes, you don’t run in simulated mountains or on the Boston Marathon course, but in a closed-circuit New York treadmill-and-weights class taught by high-profile Big Apple trainers. It isn’t cheap; the fancy manual treadmill—a copy of a Woodway (which uses a belt of individual rubberized slats that revolve around like a tank tread) that has a 32-inch TV screen bolted to it—costs $3995, with a $39-a-month subscription. Didn’t running used to be free? Tread classes begin in Fall 2018.
Onepeloton.com 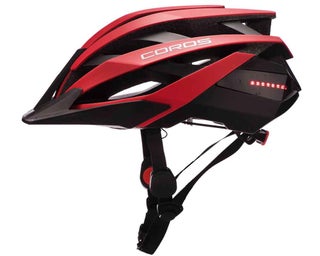 The Coros Omni Smart bike helmet and app keeps you visible to drivers with a built-in red tail light and lets you listen to music, get voice navigation, and instantly answer phone calls as you ride without blocking out traffic sounds. It utilizes bone-conduction technology, which pumps wind-free sound vibrations into your cheekbone, leaving your ear canal clear to hear traffic noise (a legal requirement in California.) The helmet includes a built-in microphone, a battery chargeable to 10 hours, a snap-on visor, and a bar-mounted remote for audio control of volume, track forward, pause/play, and calls. The app will send a message to your contacts if you crash (i.e. experience g-force impact over 1G.)
Weight: 364g
$199, Coros.com 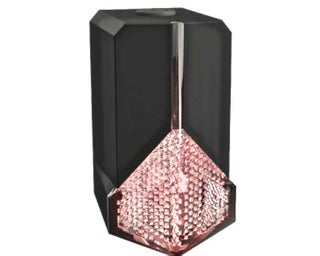 Tired of switching on your bike light at dusk only to discover you forgot to charge the battery again? That frustration and fear will be gone forever with the FIREFLY, the first bike light to be powered by the movement of the bike itself, like Seiko watches from 40 years ago. This patented process, which harvests the inherent ambient vibration of a bike, was the dissertation subject of Dr. Daniel App, PhD, an immigrant engineer from Nigeria now living in Texas. The palm-sized device attaches to your bike with a one-step latching strap and stores enough energy to stay lit while stopped for seven minutes.
($49 on sale), launches November 2018 at Esimi.co

A conventional running stroller that you push along really messes with your form. Not so with the new hands-free Kid Runner trailer, which you attach to your waist with belt-harness and fiberglass arm and pull. It allows for a natural arm swing and stride mechanics. The 25-pound trailer, unlike most everything else at CES, doesn’t have a microchip or a motion sensor in it, but does include a dampening system claimed to allow for trail running and breaks down quickly to fit in a trunk. It’ll hold a 50-pound kid.
$850, delivery in April, available for pre-order at Kidrunners.com

A Smart Running Shoe for Minimalists 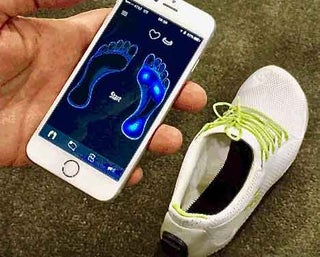 Joining Altra, Underarmour, and others, British minimalist-shoe maker VivoBarefoot has partnered with Seattle sensor-sock maker Sensoria to build the first minimalist smart shoe. To be introduced in the fall, the VivoBarefoot Smart Shoe will pack an ultra-thin 3.5mm pseudo-barefoot kevlar sole with four 100htz sensors and an onboard computer that will capture and and analyze data such as calories, step rate, forefoot, or rear foot impact, distance and elevation, as well as send vibration to the right or left foot to direct you on a preprogrammed running route. Ultimately, says Vivo marketing manager Nicholas Charlier, it will show that a forefoot landing increases efficiency and lowers impact and injuries.
Pricing TBD, expected late 2018 at Vivobarefoot.com

RELATED: The Run Gear We’ll Be Drooling Over in 2018

How to Mount and Dismount Your Bike in a Triathlon

How to Mount and Dismount Your Bike in a Triathlon