Love ‘em or hate ‘em, Newton’s unique kicks seem to be here to stay. Its following among the tri ranks continues to grow, and the introduction of the Sir Isaac (and Lady Isaac) trainers should help the Boulder, Colo.-based shoemaker broaden its reach. 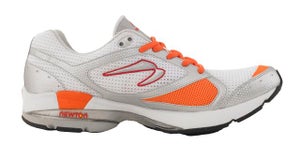 Newton Running first turned heads two years ago with its odd lugged outsole, which is designed to help facilitate a more efficient foot strike. While some who have run with the lugged soles claim the shoes have caused foot pain and injury, plenty of others credit Newton’s unique sole design for a big boost in run speed. I’ve been running in Newton’s on and off for more than two years with no major injury problems, and I feel the lugs have helped me become more of a mid-foot striker. That being said, I have not run in Newtons exclusively, instead using them only for tempo and track workouts.

It doesn’t take a podiatrist to realize that the outsole design of Newton’s new Sir Isaac trainer is much different than that of Newton’s previous iterations. At first glance, it appears that the infamous lugs have been recessed a bit—but it’s a bit of an optical illusion. What actually makes the lugs look shorter is the addition of a midfoot “chasis.” The chasis, which essentially wraps around the outside of the lugs, provides a bit more stability than Newton’s Performance Trainers. The Sir Isaacs also use a beveled heel and toe, which help pronators (like myself) adapt to a more efficient (or more forward) strike. These additional features bring the weight of the Sir Isaacs up to 10.9 ounces (size 9), about half-an-ounce bulkier than the Performance Trainers. 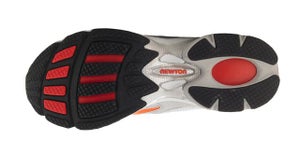 If you already run in Newton’s Performance Trainers and like them, then you probably don’t need to try the Sir Isaacs. These shoes are ideal for those looking for a smooth transition to forefoot running. However, regardless of what kind of striker you are, we feel the Sir Isaacs are a better option than the Performance Trainers for trail runs, as the chasis provides extra stability over uneven surfaces.

For more on the Sir Isaacs or Lady Isaacs, visit Newtonrunning.com

A Moderate Approach to Minimalist Shoes