Polar has finally made a handful of watches that are on par—if not better than—other smartwatches in the endurance sports space. Their Vantage V was a nearly overpacked watch with built-in running power and advanced heart-rate functions. Their Vantage M was basically a non-touchscreen, non-running power version of the V at nearly half the price which felt almost mispriced with so many great features. The Grit X falls somewhere between with a big range of functions that triathletes could definitely use. We’ve already posted a basic review of the Grit X and an unboxing video, but below in a Polar Grit X extended review we take a closer look at the functions and how this watch compares to other watches in the Polar line. If you’re thinking of coughing up 400 of your well-earned dollars, there is a lot you should know before you hit add to cart: For some triathletes, the Grit X is a dream come true; for others it’s business as usual.

Without looking at every single feature in the new Grit X, below we’ve broken down the most important tri-related functions and given an assessment on each. 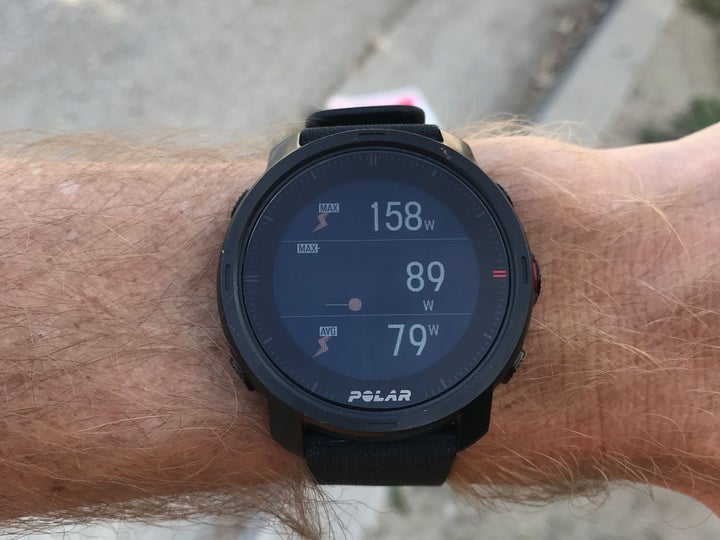 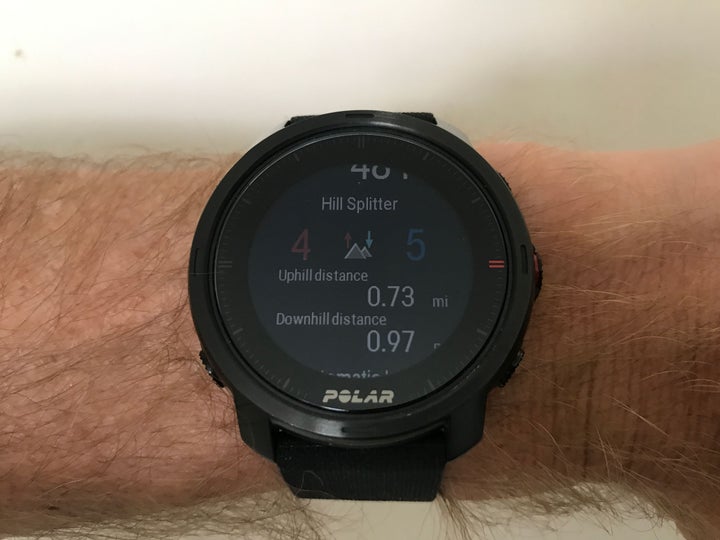 Polar Grit X Extended Review: Why This Watch Is Better Than Other Polar Options

First off, it’s important to note that this is more of a trail/outdoor watch than the other offerings Polar has. The Vantage M and V are both super techie and science-y, but the Grit X does a much better off-road and has more features that triathletes might want without any superfluous ones that they might not be into paying for. That said, this is not a hardcore “outdoor adventure watch” like the Fenix series with barometric features, built-in maps, etc. To make a long story short, if you want on-board running power, you can either get the Grit-X or spend a little more for the Vantage V. If you don’t care about run power, the only big things you’ll lose by getting the far less expensive Vantage M are route guidance, the hill splitter function, the fueling functions, and a touch screen. The other lost features are fairly minor (Strava live segments and some battery life loss). Meanwhile, the Polar Grit X is a slightly cheaper, definitely dirtier version of the Vantage V.

Polar Grit X Extended Review: Why This Watch Is Better Than Other Brands’ Options

It’s almost unfair to compare the Grit X to something like Garmin’s Fenix series because the lowest end Fenix 6 is almost $200 more, but the Grit X actually punches into that weight class. While we’ll have a Fenix 6S v. Grit X head-to-head soon, the TL;DR is that most of the $600 Fenix 6S’s features are really not super important to triathletes who mostly swim, bike, and run. When you compare the Grit X to the Forerunner 645 in the same price range at $400, while the 645 does fine, it feels a little more utilitarian and unpolished when compared to the refined built-in features in the Polar that are pretty much plug-and-play. While the Garmin might feel a little more expandandable and customizable with more flexible sport modes and apps, when really pinpointing what triathletes want and need, the Polar is ready made for the multisport athlete without a lot of excess fooling around. Suunto’s 7 is far more lifestyle than the Polar, and the Coros Apex is a strong contender, but also feels a little less finished than the Grit X.

Polar’s app, Flow, is fortunately a high point that works as well, if not better than Garmin’s Connect or the Suunto app. Though it takes a little while to get used to, Flow has a very powerful post-workout analysis and a powerful workout creation feature.

Other very cool functions that we didn’t touch on in the list above include a display icon in the workout screen that tells you how much battery life (in hours) you have left in that sport mode. While the standard  “30%” isn’t super useful when you’re heading out for a three-hour ride, not knowing if the watch will last, the beauty of this little unique indicator is you can switch on power saving features (less GPS sampling, no on-wrist heart rate) before you head out and potentially lose your data mid session. As someone who has done this more than a few times in the past, I really do love the comfort of this screen.

Polar Grit X Extended Review: Why This Watch Is Not As Good As Other Brands’ Options

While this is a great watch for triathletes and especially those who like to hit the trails, it’s not perfect. First off, in a time where most smartwatches do music and contactless payments, Polar’s watches are still much more training focused than lifestyle as they’re missing both. While it does a great job of showing smartphone notifications via a Bluetooth connection (which has gotten vastly better than when we reviewed the Vantage M and V last year), it’s still not a do-everything smartwatch like some of Garmin’s and Suunto’s offerings. For instance, phone notifications don’t show up automatically, you have to swipe up or flick your wrist to view them. Not a big deal, but it’s not as effortless as Garmin/Suunto. Similarly, some of the really cool features on the Grit X like FuelSmart and the preloaded workout options are fun, but they can’t replace a real nutritionist or coach—these are just a best guess based on history and some good math.

There are also a few small details—like the clunky “multisport” function that forces you to select a sport, hit start, then hit stop and select, find, and start the next sport between transitions. The triathlon mode works great for race day, but if you’re doing a repeating brick, a duathlon, or a swimrun event, you’re kind of stuck scrolling and stopping and starting when you go from leg to leg.

Again, fair warning that you cannot—as of this writing—import other activities, like a bike ride from your Garmin or Wahoo into Polar Flow. There is no way to upload into the Flow app or website a .fit or .gpx file from either platforms or an online training platform like Strava or Training Peaks. To put it in perspective, this means you can pull everything out from your Polar and Garmin or Wahoo and put it all into TrainingPeaks or Strava, but if you want to use the very cool recovery/guidance features in the Flow app (and therefore in the watch itself), you have to just enter in mileage and pace and calories by hand into the Flow website, losing all of the other robust stats you’d collect from your bike computer. Garmin Connect, for instance, does allow you to import data files from other devices, so it’s an odd missing feature that Polar users have been asking for for a while. One way around this is to use the Grit X as a bike computer—it does a good job of reading power from Bluetooth cycling power meters (not ANT+, though).

The only other little good news/bad news feature on this watch is that there’s not a ton that you can do—in terms of workout set up or sport set up—from the watch itself. Some people may appreciate the fact that the Grit X’s interface is quite simple, allowing quick navigation and use, but others may feel frustrated by the inability to edit sport modes, data screens, and create workouts on the watch. You need to use the app for a lot on the Grit X. That said, the app is pretty good, but you just need to make sure everything is set up before you head out the door. Also, the watch’s basic interval/countdown timer setup is slightly clunky and buggy.

Polar Grit X Extended Review: Who Should Buy This Watch?!

Basically, there are triathletes out there who either already use running power or should be using running power. The biggest reason someone would use running power is that they train in an area with lots of hills, lots of trails, or some other factor that prevents them from using heart-rate and/or speed as reliable training metrics. Do you go to the track or another flat measured/reliable spot for all of your big run workouts? Then, you won’t really need power for running. However, if you run or race on hilly courses and need help pushing or pacing yourself when elevation comes, running with power is a huge boon. For me, I love running with power, but I hate having to connect and charge a bunch of devices—I find it takes a lot of fun out of the run. While some can argue the accuracy of a wrist-based running “power meter,” it’s at least consistent enough to help pacing, say, a hilly run leg in a tri to help prevent from going out too hard or fading at the end. Same thing goes for trying to tempo/interval on trails—minutes/mile and heart rate will lead you astray almost every time.

In that same vein, something like FuelWise helps me get out the door quicker without being reckless about my nutrition/hydration. It’s no nutritionist, but it’ll likely prevent you from bonking or doing damage to yourself. The Hill Splitter feels like a neat idea, but doesn’t really offer a lot of practical use aside from post-run “oh that’s cool” stats—though it could if it was refined a little bit.

I love the fact that this watch is an all-in-one device that lets me train with much less fuss. It almost feels like its got my back when I try to do something stupid (like go for a two-hour run on a 5% battery charge and no water). There are a few things that take some finagling, but to answer the question, at least for me: “Does this make my tri-life better and easier?” I’d say yes, for sure.

Senior editor Chris Foster is a former pro triathlete and a constant destroyer-of-all-things-gear. He has broken, lost, ruined, and abused more triathlon stuff in 15 years than most people will in a lifetime. Though he no longer races professionally, his recent “age-groupiness” combined with a long history of playing with tri things gives him a unique perspective into what works, what doesn’t, and why.

While most of the products tested are provided at no charge by brands, none of the reviews’ content is swayed or previously approved as a result of any promotional payment, agreements, or otherwise. We at Triathlete take that editorial line very seriously in order to provide an unbiased account of everything we review.

This Sticky Little Patch Could Save Your Race