As pools are decidedly difficult to find, now could be the perfect time to look for that perfect piece of neoprene for open-water swimming and racing, once the season restarts. We reviewed six women’s triathlon wetsuits — a mix of brand new and recent favorites — to help narrow down the choices. The most important thing in any triathlon wetsuit will always be fit, but before you get a chance to try it on, it’s important to understand which features work and which don’t. Your guide is Sara McLarty, a former pro triathlete who also represented the U.S. at swimming world championships in 2004. Today’s women’s triathlon wetsuits are even more specialized than ever, so below we break down what to look for in your new neo. Looking for men’s wetsuits? Check out those reviews here. 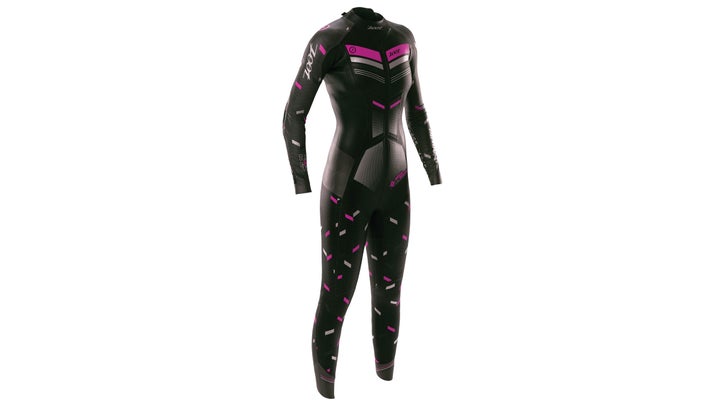 The Wikiwiki is a swimmer’s wetsuit through and through. If you are at home in the water and looking for speed, Zoot has delivered. If you are looking for warmth and extra buoyancy, check out the reviews below or maybe seek out another Zoot product. This suit provides plenty of insulation for most wetsuit-legal temperatures, but testers recommended having a second option for extreme conditions.

The overall theme of the Wikiwiki is “light and thin,” including a market-first .5mm neoprene on the sleeves. There is almost nothing to it when you pick it up, and it wears like a glove. The suit molds to your body and moves with you in the water, due to the overall thinner neoprene from top to bottom.

While a thin and light suit is great, it also means that it’s more likely to suffer damage and wear over time. After a couple weeks, the wrists and neck were already showing mild signs of use.

Testers swam in a women’s medium and said it felt true to size. There are only six options for women in the Zoot sizing ,while the men have eight. The total flexibility of the Wikiwiki allows it to fit a range of female body types without restriction—including those with more hips, chest, or stomach. 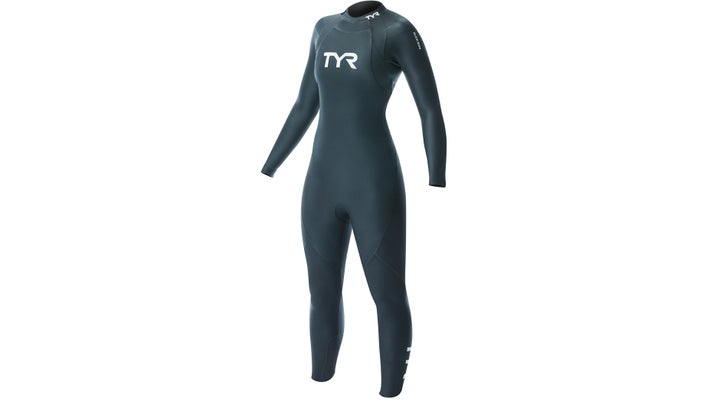 TYR is a very reputable swim and triathlon company with a big presence in the sport. For a time, they created and sold some of the most expensive wetsuits on the market…even one that came in its own metal briefcase. So, when we set out to test the most basic model of the Hurricane line, we had high hopes that some of the elite features would trickle down to the Cat 1.

Reviewers were satisfied with the Cat 1 at keeping warm and providing buoyancy. Unfortunately, there were no bells and whistles, just the basics that a novice swimmer or a budgeting triathlete would appreciate. The torso and legs are a thick 5mm neoprene to elevate the lower body and provide a more streamline position when swimming, while the arms are a constant 2mm material for easier arm strokes.

In contrast to other wetsuits we tested, the Cat 1 material is not extremely flexible. The material feels stiff and never hugs or forms to the swimmer’s body. This leaves lots of extra space for water to sit inside and start to make the swimmer feel heavy, like they are swimming inside the suit.

With seven women’s and eight men’s size options, there is a choice for most bodies. We tested the women’s medium and found the fit to be very long and lean given we followed the size chart’s recommendations. If sizing is consistent throughout, this will suit athletes with long torsos and long legs, while those with larger chests and shoulders should size up. 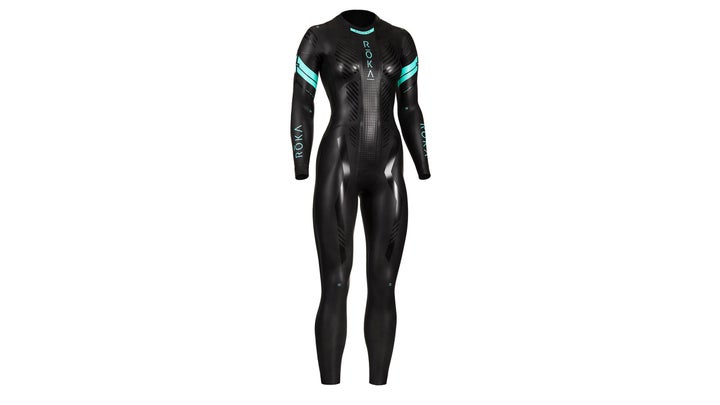 The MX in the newest Roka suit stands for “Maximum Buoyancy.” We can already hear the pounding of feet as every runner-turned-triathlete rushes to order one, as the MX fills a gap in the market for a high-end suit that caters to a non-elite swimmer’s position in the water. We know that triathletes who pick up swimming later in life are unlikely to achieve a body position like Lucy Charles…and Roka is capitalizing on that concept.

This suit boasts 20% more buoyancy than Roka’s entry-level suit, and when tested by an elite swimmer, she was like a water bug skimming the surface. The suit is heavier than most high-end models because there are more panels of thick 5mm neoprene in the design. But when the suit is in the water, it elevates the chest, hips, and legs of the tester and improves the position of every leg-dragging swimmer.

Size ranges are unique to Roka, and studying the sizing chart is highly recommended. There are 10 women’s options and another 10 men’s. We tested the women’s medium, which fits a much smaller body than other brands. All the testers responded that the arms are extremely snug, so women with muscular arms should size up or consider a men’s suit. 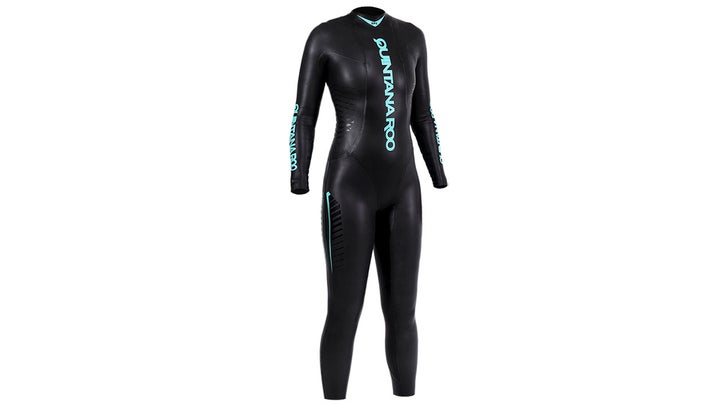 If you were around triathlon in the early years, you owned something from Quintana Roo. They made some of the first triathlon-specific bicycles and the first triathlon swimming wetsuits. Time passes, but those who have a passion for the sport and innovation have stuck around. The Hydrosix puts this long-standing brand back onto the shoulders of elite and age-group athletes.

The standout of this suit is the “SuperStretch” material that is used on the sleeves but also extends through the shoulders and into the side-body. This extension of thin material allows the athlete to have freedom in all the muscle groups used for a stroke. When this freedom is paired with a permeable catch panel on the forearms, the sensation of wearing a wetsuit is almost completely gone from the upper body.

We tested the M2—one of seven women’s sizing options. The range leans heavily towards smaller bodies and is considerably lacking in larger sizes. Women over 150 pounds are essentially given one option, or they can try one of the seven men’s sizes. Testers reported the torso of the suit was very short, causing excess pressure on the shoulders and between the legs, and would not recommend this suit for long bodies. 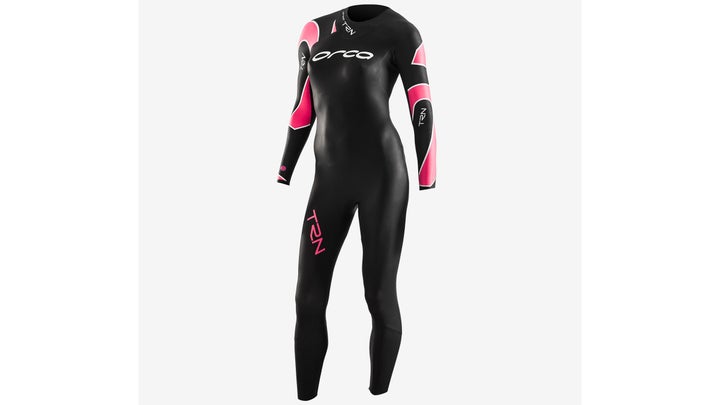 The TRN is one of the most unique wetsuits on the market for multiple reasons: First, the product we tested does not match the online description. Instead of a mixture of 5mm and 2mm neoprene thicknesses as described, it is a solid 2mm from neck to ankle. This is a different approach to a “beginner” wetsuit by not providing as much flotation as other brands. Testers found they like the freedom of walking and running due to the thin neoprene hip and leg panels.

Second, the simplicity and low price tag make this suit a great option for more than just triathlon races. You could wear it to train in a pool without chlorinating your high-end suit. Coaches can wear it to stay warm while working with novice athletes. Use it for additional warmth while participating in another water-based sport. The options are endless for an affordable and comfortable wetsuit.

Finally, the Orca sizing guide offers a mere five choices for women (we tested a medium) and a much larger nine choices for men’s suits. Beyond the pink decorations, the women’s suit does not appear to have a particularly gender-specific fit. 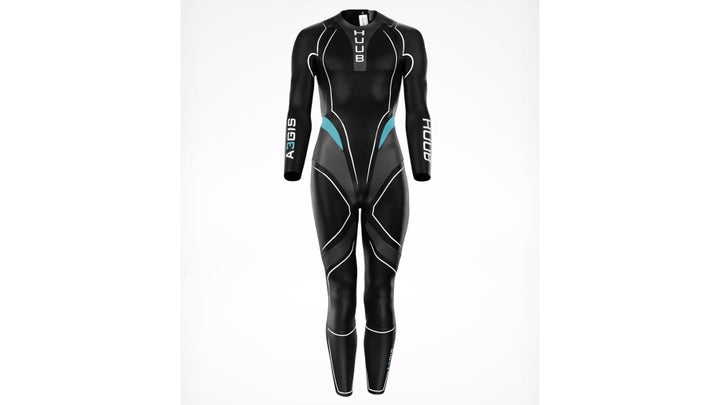 We did a little research and watched a tutorial before we jumped into the Aegis. There is a learning curve for the unique HUUB “Breakaway Zipper” which comes standard on their triathlon suits. Fortunately, HUUB has created some great demo videos and we felt confident heading to the lake.

Our first attempt wasn’t perfect, we pulled the zipper up too far and released the breakaway feature. After a quick do-over, the tester suited up correctly for a swim. Deploying the Breakaway at the end of a swim is a lot of fun: one quick tug upwards and the whole suit is open! The takeaway here is to practice with a HUUB suit multiple times before the race, even if you have lots of wetsuit experience.

The Aegis itself felt smooth in the water with no tension in the arms and shoulders. Testers liked the patch of extra stretchy material along the rib cage that allows the side-body to extend with each forward reach. Maintaining a high-leg body position was effortless in the 3:5 (additional buoyancy) version of the suit. The only complaint was a loose wrist opening that allowed excess water to enter the sleeve during strokes.

We tested the Women’s ML, one of eight options, after HUUB correctly suggested “if in doubt…go up a size.” Knowing that triathlete’s bodies don’t fit into one category, it was great to see an inclusive sizing option of “short/stocky.”

Ask A Gear Guru: Should I Wear A Sleeved or Sleeveless Wetsuit?