As pools are decidedly difficult to find, now could be a great time to look for that perfect piece of neoprene for open-water swimming and racing, once the season restarts. We reviewed six men’s triathlon wetsuits — a mix of brand new and recent favorites—to help narrow down the choices. The most important thing in any triathlon wetsuit will always be fit, but before you get a chance to try it on, it’s important to understand which features work and which don’t. Your guides include Shaun Guest—a lifelong swimmer and triathlete—and Chris Foster—a former pro triathlete and senior editor at Triathlete. Today’s men’s wetsuits are even more specialized than ever, so below we break down what to look for in your new neo. Looking for women’s wetsuits? Check out those reviews here. 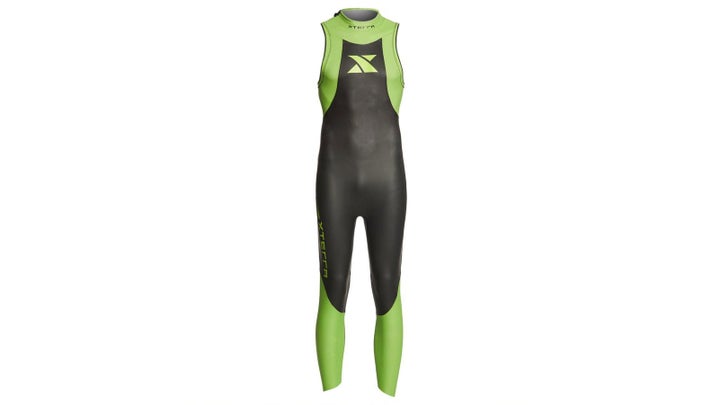 First, it’s important to note that a sleeveless wetsuit definitely has a time, a place, and a type of triathlete for whom it’ll work best. Like all sleeveless wetsuits, the Vivid has excellent range of motion across the arms, but isn’t the best choice for colder temperatures. However, the Vivid is unique in that it does an excellent job of keeping water out (something not all sleeveless wetsuits excel at) from the neck and arm holes. While some water may sneak in while jumping in or accelerating off a push, it wasn’t enough to cause concern. Removing the Vivid is also quite easy, but a little lubricant around the ankles won’t hurt.

The only downsides to this wetsuit were the stiffness of the neoprene in the legs and the surprising lack of floatation. While it’s no surprise that a wetsuit without arms floats less, testers still noted markedly less floatation than they expected. Similarly, testers struggled when it came time to really get a kick going super hard—feeling slightly out-of-sync when the time came.

As far as sizing, testers strongly recommend sticking to your height if you’re stuck between two sizes, and also wearing a race singlet while trying on the suit to get a better sense of fit (assuming you’ll be racing in a top). For triathletes who want mobility at all costs, who don’t kick a ton, and for whom floatation is not a priority, this is a great wetsuit. 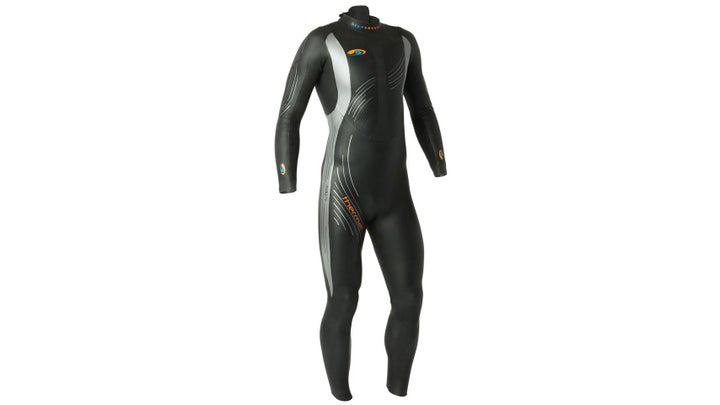 Blueseventy’s Thermal reaction is another wetsuit with a very certain specialty: warmth. Using a thermal liner, Blueseventy says its wetsuit works well for temperatures down to 48 degrees F—for anyone unfamiliar, that’s very very cold. But with so many restrictions being placed on pool swimming right now, we felt this was a worthwhile tool to have in the toolbox as open water becomes the final refuge for the triathlete, at least for the immediate future.

Not only is this an extremely warm wetsuit, but it’s also very floaty—one of those floatiest of the men’s group that we tested (not as floaty as Roka’s Maverick MX, but that’s another story). The 4/5mm panels in the anterior core and lateral 2mm panels aided in excellent body balance and rotation from side to side—a big ask in a wetsuit that’s so thick. Given the need for protection from cold water, testers also appreciated a very snug neck and wrist cuffs that prevented any unwanted water entry.

The only slight drawbacks to this suit were that testers felt a tiny bit of pulling through the elbow bend when going for a high elbow pull—likely from the extra material. The Thermal Reaction was also a little difficult to remove, but again this is a function of the snug seals at the arms and ankles alongside the extra thermal material. Also, don’t expect this to feel very comfortable when swimming hard over 60 degrees F. Fitwise, testers felt the torso was more snug than a non-thermal Reaction of the same size. 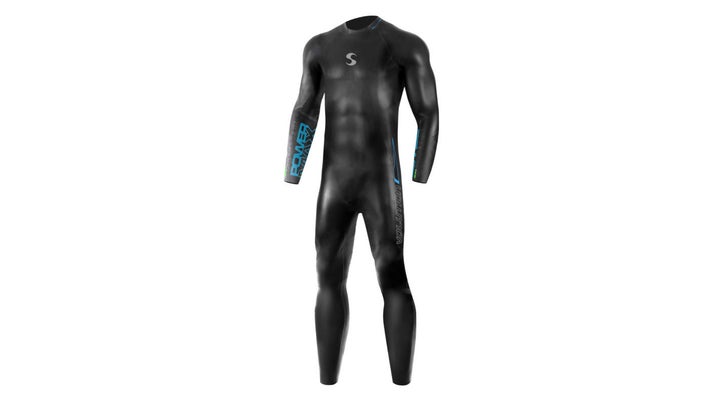 Though priced far less than the other wetsuits in our roundup (like far, far less), the Volution shockingly holds its own and seems to punch well above its weight class when it comes to beginner to intermediate use. Even when compared to the higher-priced Synergy Hybrid, our testers found the gap between this sub-$200 wetsuit and Synergy’s $800 wetsuit to be smaller than they’d thought.

Testers felt lots of freedom throughout the arms and were surprised to find how easy it was to get in and out of. Similarly, there was no chafing through the neck or arm area after longer swims—a common complaint in budget wetsuits with slightly less refined neoprene and seams. Testers also reported excellent feel for the water.

In terms of downsides, the Volution didn’t have many. Testers had a tricky time with finding just the right size in a Synergy suit overall, which resulted in a little water entry through the neck. They also reported some small air pockets in the armpit and shoulder area—likely a result of a funny cut mixed with slightly less “forgiving” neoprene at this price level. The only time testers felt any restriction at all was when sighting, as the high-end neoprene like on Synergy’s Hybrid did a better job of getting out of the way when it was time to lift out of the water.

Overall, as long as the Volution is a good fit, in terms of sizing and body type, this is an excellent choice for anyone, even experienced racers. Just because this wetsuit has a low price, it doesn’t mean it’s for beginners only. 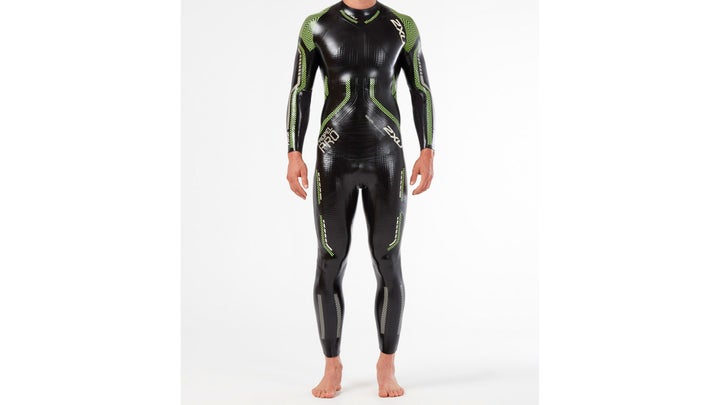 One of the higher-end wetsuits in the testing pool, reviewers couldn’t stop raving about the flexibility in the Propel Pro. Throughout most of the wetsuit, 2XU uses 3mm and thinner neoprene to create a suit that definitely focuses on more advanced and experienced swimmers who need flexibility and aren’t afraid of giving up a little on the floatation side. Though the Propel does have scattered 5mm panels of 39 cell Yamamoto neoprene (the most high-end offered on tri wetsuits), testers felt that it was one of the least float-y wetsuits tested—for better or for worse.

Partially due to the flexibility in the arms, testers also really liked the fact that they could truly stretch out their stroke and glide when necessary. While a high-tempo pace with a shorter stroke was still possible, the suit seemed to excel when swimming in “max distance per stroke-rate mode.” Testers were also impressed with the unique “concave water entrapment zone” feature built into the forearms of the suit—catching more water at the beck end of their stroke.

While there weren’t too many complaints, testers did note that the lack of thicker neoprene not only decreased the buoyancy lift that more beginner/intermediate swimmers might seek, but it also made for a chillier swim. When in flat water, testers felt like they glided along with ease, but when the water got rough, they reported not rising above the chop as they would in a floatier wetsuit. Testers also had some misgivings about the neckline—though they reported no chafing—and were concerned about durability given the thinness of the material. 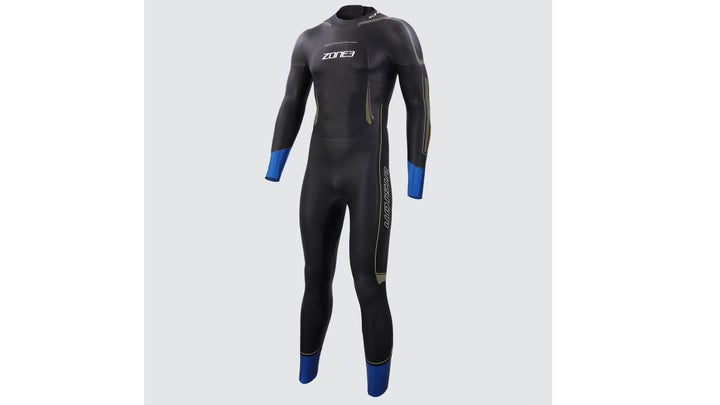 Considered a “top-of-the-line” entry-level wetsuit, Zone3’s Vision really impressed testers with its focus on the features that beginners—and those without a swim background—usually need. While the neoprene was decidedly thicker than a suit like the Propel (but at almost half the price), our testers had great things to say about the level of warmth, buoyancy, fit, and even flexibility, despite the extra overall material.

Testers felt an adequate amount of flexibility throughout the arms and reported back that they had no issues getting a straight arm entry through the front of the stroke (as opposed to entering wide, like many wetsuits can induce). Testers also loved the silicone “speed cuffs” that helped getting this suit off in T1 while still preventing any water entry. The only downside, aside from the extra neoprene itself, was that testers felt a slight bit of “catch” while trying to keep a high bent elbow through the middle of the stroke—though it’s far less than other entry-level suits.

While sizing has been an issue in the past, this latest suit seemed to fit testers well, and they were similarly impressed by the eco-friendly neoprene with a smaller carbon footprint than usual material. Though $400 is not exactly bargain basement, testers were confident that this would check all of the boxes for making a beginner/intermediate triathlete faster overall: improved sighting, floatation, and quick transitions. 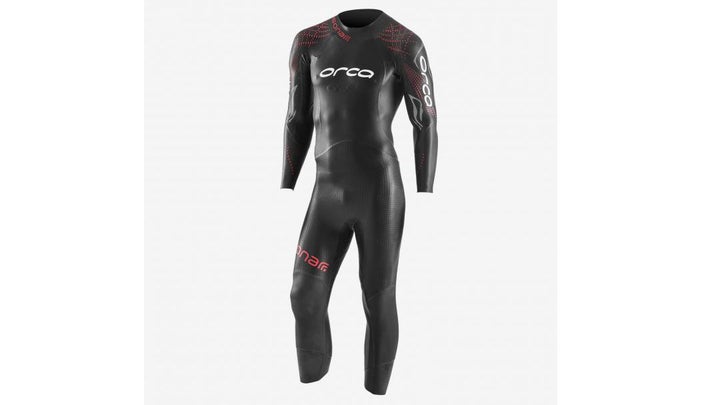 Without reaching into the absolute upper echelons of high-end wetsuits, Orca found a way to pack a pile of bells and whistles into a wetsuit that felt light out of the box and light on our testers’ bodies. Though we recently ran the Sonar up against Quintana Roo’s HYDROfive wetsuit in a $500 face off, this suit actually feels more like a top-end offering in the $700-800 range with the features packed into it.

Testers found that features like “Infinity Skin” and “Aerodome” neoprene simply equated to a crazy lightweight and super flexible wetsuit—almost to a fault. For experienced swimmers who crave water feel and the ability to get themselves into their already-refined body position, this is a clear favorite, but for those who require more structure and floatation, there are other suits that might be a better choice.

Because of the inherent flexibility in this suit via modern materials, the Sonar is super easy to get on and off, and really excels when it comes to lengthening one’s stroke (much like 2XU’s Propel, but at a lower price). While durability wasn’t an issue for testers, the fact that so many of these materials were thin and stretchy definitely raised the longevity question for down the road. Fit was also true to size, and the flexible neoprene helped reduce any air pockets and prevent any water entry as well.

Daniela Ryf and the Curious Case of the Banned Wetsuit