Super plush, but not sink-y, foam from tip to tail with a ton of unusual features make this shoe feel like a test-out prototype with tech we might see more of in Hoka’s line

The new high heel tab isn’t for everyone, and there are some serious issues with durability

So before we get deep into this Hoka Clifton Edge review — and there is a lot going on here — it’s important to know that there is very little about the Hoka Clifton Edge that will look familiar to those who are looking at it through the “Clifton Lens.” Yes, they’re about the same weight, and they have the same heel/toe drop, but that’s where the similarities vanish. From what we understand, the new Clifton 7 has a very similar updated upper to the Clifton Edge, but the midsole and outsole remain mostly unchanged from the Clifton 6. Though we haven’t seen the new Clifton 7 in person, other reviewers have also said that the ride remains mostly the same as the previous version—plush and cushy. Meanwhile, the Edge has a quite different midsole in both ride, foam, and—most obviously—structure. We’ll get into all of that below, along with how different the outsole is and what that means (spoiler alert, it means a lot!).

Also, in terms of origin story, it’s important to know a little bit about another super-weird pair of shoes, the TenNine that Hoka sort of quietly released earlier this spring. Check out Podium’s great review of Hoka’s TenNine, but for the TL;DR: It’s a very odd shoe with one über-specific purpose—to run downhill better off-road. The TenNine boasts a heavy-handed price tag ($250!) and a super heavy back half that looks like M.C. Escher’s version of a trail shoe, with an almost comically extended heel area that looks like someone hung this shoe out in the sun by its toe and the foam melted down like a candlestick. My best guess? The TenNine was a quasi-prototype, limited release (hence the price) that looked to prove the big, long heel concept that the Clifton Edge uses in a more conservative way. We’ll get into that more below, as well.

All The Weird Things

While we won’t even touch upon the color choices (there’s one color, and it’s the same for both men and women) because style is so subjective, there are some not-so-subjectively strange things going on in this pair of shoes. Let’s start at the top and work down with the list of weirdness, then break it down into what works and what doesn’t quite: First, the upper has a brand new 3D-woven, nearly seamless construction with a super minimal tongue that’s attached to the footbed beneath the insole. The heel is super unusual (at least for Hoka, other brands have been doing this already) with a tall rear heel piece that is likely meant to replace the heel loop tab that Hoka’s generally had on most of their shoes—something triathletes in transition have always appreciated.

From there, we move down to the midsole, and things really start to look different. Using two different types of foam—one grey and the other pink and orange colored—Hoka’s new midsole (which also works as an outsole, but more on that later) is meant to be a compressed EVA that does double duty as something soft on landing and springy on take off. Both types of foam extend off the back of the shoe to provide a super unique heel “tail” that’s similar to the extreme thing we saw on the TenNine. The idea here is that heel strikers will contact earlier and roll more naturally onto the front of the shoe. Similarly, the Clifton Edge’s entire midsole flanges out, just like someone stomped down hard on the shoe while the foam was still wet, causing the sides to squish and flare out, in an effort to add stability.

The outsole itself is actually made up simply of midsole material—like a few other brands do—and as such there is no rubber or high-density material that contacts the road. Definitely stay tuned for what that all means.

So this is the good stuff. First off, the upper is very very good—one of the best we’ve tried this year. It vents incredibly well, it does a great job of wrapping the foot with very few obtrusive stitches (something triathletes will appreciate). Even though the tongue is extremely minimal, it actually does a great job of getting out of the way without becoming a balled up nuisance when you’re putting them on quickly. While upper stuff is always cool, of course the most important part of the shoe is what’s beneath your foot, and in the midsole is where the Edge shines.

The two types of foam Hoka uses here are not brand new, but they’re often used this foam in different places to different effect; the combination is new, but not the specific foams. The ride on this pair is definitely more springy than the regular Clifton, but of course not as springy as something like the Carbon X. This is a good midground ride that certainly has a modern “lively” feel like so many of the new foams provide while still giving a great amount of cushioning for downhills and stability due to the splayed-out foam around the outside of the midsole. You’d have to be trying very hard to roll an ankle with these—which is something those who have roll-susceptible ankles should actually consider when looking at this shoe. With all of that said, this is a great pair of shoes for long runs—even though they’re light. They’re also great for hilly areas because honestly there are springier, lighter shoes out there for uphill running, but the damage from hills more often comes on the downhill, and the cush and wide landing pad do an outstanding job protecting your feet, ankles, and legs.

Before we get into the issues with the Clifton Edge, it’s important not to minimize how great the ride is on this pair of shoes—particularly for heel strikers and those who are known to develop downhill injuries. It’s not something a lot of running brands talk about (“Faster! Springier! More responsive!” is usually more catchy), but it’s a big deal. That said, these are as nimble as one would expect from something that seems to be labeling itself as a tempo trainer. That’s just not what these shoes are. These are great everyday running shoes, but they’re not the pair you dust off when it’s time to feel quick. Of course, that doesn’t mean they’re not great long-course race shoes—they could do that very well.

Keeping in mind that these are not once-per-week shoes, our biggest issue with the Clifton Edge’s were their durability. While I’m aware of the fact that a shoe isn’t necessarily “worn out” when the outsole looks worn—it’s what inside that matters in the end—but the outsole here, without any kind of bumper or protection, wore very fast over less than 100 miles of use. To give some background: I am a very efficient runner who does most runs under 7:30/mi. pace with no severe heel striking issues or a history of wrecking outsoles with odd impact/toe-off wear patterns—but I do weigh 175(ish) pounds. That said, the tread on both the heel and, surprisingly, the middle of the forefoot wore away quite quickly on not-hot roads and a variety of runs. Even if it doesn’t mean the shoes are shot after a couple hundred miles, the tread certainly will be, and that’s something to consider.

The only other issue—that’s more me-specific—is that the high heel tab did actually irritate my sensitive Achilles near the end of runs. It wasn’t enough to cause injury or even pain the next day, but it was noticeable on these shoes, where it was not on others. This is not a deal-breaker, but if Achilles pain has been an issue in the past, you may want to rethink this.

The only other minor details of note are that the insole is glued down (orthotics wearers, sorry), and while it’s a neat feature that might work for some, the extended heel tail off the back got pretty much no use with my specific stride. It looked great, and may have provided some secondary cushioning as I struck further forward on the forefoot, but literally most of the heel tail was completely untouched after almost 100 miles of very hilly running. And of course, I’m confident of that due to the softness of the “outsole.” 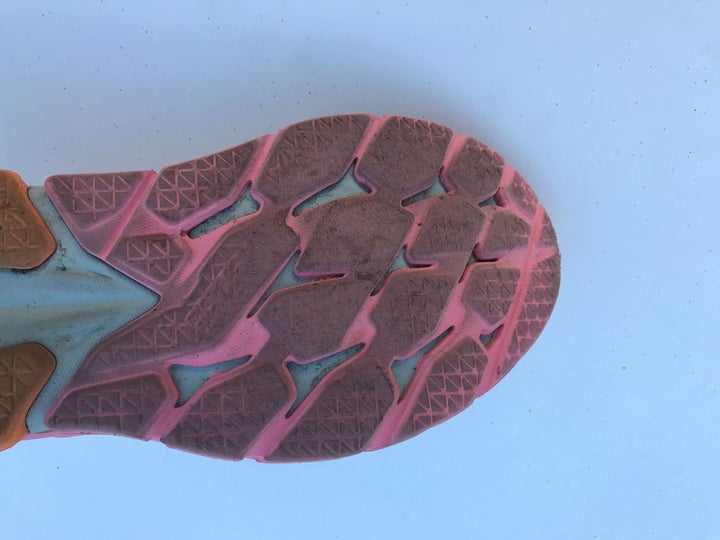 So even though the “misses” section is long in this Hoka Clifton Edge review, it’s very important that people don’t think this is a “miss” shoe. Even if it was, the Clifton Edge is one of the most interesting shoes we’ve covered in a little while, and some of the best parts of it could end up in other shoes, for sure—Hoka has been known as an innovation leader in the shoe industry, for this exact reason. The misses here aren’t a huge deal if you can overlook durability and some possible Achilles triggering (again, only if you already have a touchy Achilles, like I admittedly do) and understand that this is a really well-riding shoe that’s fantastically tuned. Again, this is not going to be my fartlek or pyramid or hill TT go-to shoe, but it’s a great pair for runs over 8 miles (even better for those over 12) where I still want to feel lively, but need leg protection. Just like the NineTen was an ok concept that needed to be refined, I think the Clifton Edge has good concepts that slightly need to be refined to be a great shoe. For sure I’ll continue to wear mine until the bottom grinds off, and I’m sure I’ll miss them when they’re gone.