Why These Two Lightweight Trainers?

It’s all about the gimmicks! That’s the short answer, but the long answer is a lot less sassy. Both of these lightweight trainers use some pretty weird and future-y tech to try to do one simple thing—give you a good run. One does really well with it, one struggles a little bit. Under Armour’s HOVR Machina runs the full gamut of current running shoe buzzwords and uses All Of The Things that everyone is trying out right now: CARBON! FOAM! BLUETOOTH! BRIGHT ORANGE! FREE FACEMASK! Ok, just kidding about the last one. On the other hand, On uses tech that literally no one else uses. Their little lightweight open “pods” provide both cushioning and propulsion without a whole lot of guidance—by design. It’s a singular piece of tech that exists exactly nowhere else, and is the backbone of their extensive line of running shoes. While the pods aren’t brand new, the idea is still entirely novel and usually lands with people who want to try something different. Under Armour’s tech is everything for everyone; On’s is something very unusual and specific. Both want to make you run faster and feel better doing it.

Ask a Gear Guru: What Are This Season’s Lightweight Running Shoes? 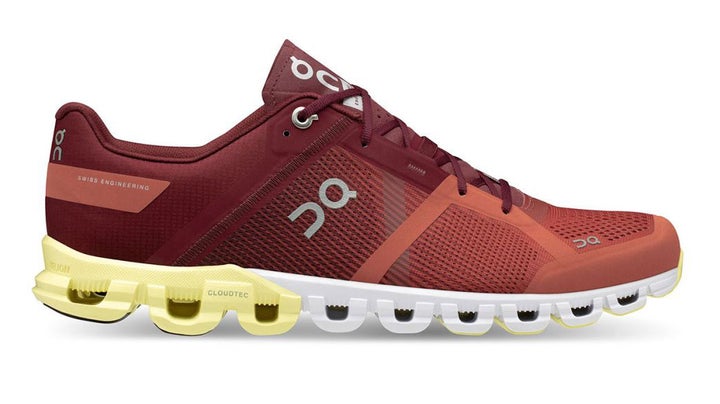 So if you have no experience with On’s unusual cushioning system, know that all of their shoes use little open “pods” to absorb both horizontal forces (moving forward) and vertical forces (hitting the ground). For many of their shoes, this creates a propulsive feel that definitely encourages a quicker toe-off than something with a ton of foam—which we see with a lot of brands right now. At the same time, because they use open pods, there is definitely a level of softness, but you definitely wouldn’t call it “squishy” like in the maximalist shoes that are popular. Midsole aside, On is known for some very high-end, forward thinking upper design with lots of “Euro” details. In other words, they make a very pretty shoe with an aesthetic that would probably appeal to a modernist architect or something.

On’s latest iteration of the Cloudflow—their decidedly lightweight, more responsive trainer—they’ve definitely continued the tradition of cutting-edge upper design. The upper of this lightweight trainer has more details than we can even list here: A Swiss flag tab attached to an embossed reflective strip across the back, little logo’d lace-hole rings, taped and stitched suedelike materal throughout, three types of mesh, an elastic lace holder, and much more. The upper here is almost like a work of art, and absolutely ticks the “I want to take these out and run in them and be seen running in them” box.

As far as the outsole goes, these probably aren’t the most durable shoes you’ll use, but there are rubber pads in spots where most people put in a lot of wear. As with most of their shoes, the open pods can absolutely catch small pebbles and rocks, which cause an annoying clicking at best and can mess up your stride at worst. Needless to say, these don’t excel on the trail at all, but even on roads the “rock thing” can be an issue.

Now for the ride: Surprisingly, there’s not a lot of rebound or spring to these lightweight trainers at all. In fact, the feeling can best be described as flat or slightly dead, particularly when running at mid to slow speeds. The platform feels very hard and gives very little response, which is surprising given that this is the goal of these shoes. When running at faster speeds, there’s a quick toe-off, but no real assistance in that department. This is absolutely not a long-run shoe, and while it does fine on uphills, but nothing special, it truly struggles on downhills unless you’re truly pushing the pace. 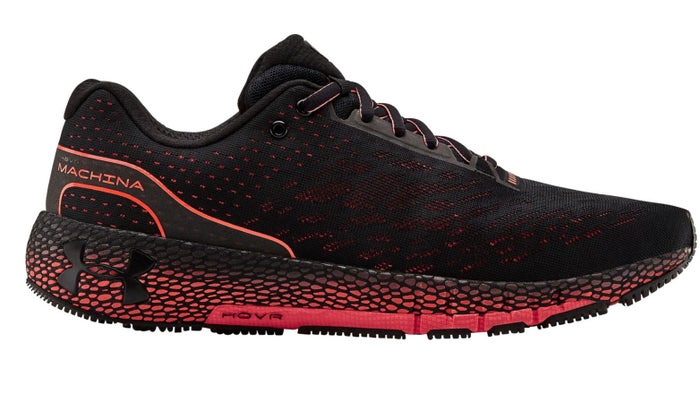 While On started exactly as a running brand by multiple Ironman winner, Olivier Bernhard and two partners, Under Armour’s beginning had absolutely nothing to do with running or endurance sports. UA got its start by making compression-style garments to be worn under football pads, before expanding into almost everything else from there. As such, Under Armour has traditionally been playing catch up with more established running brands in terms of running shoe quality, generally following trends with hit-or-miss results. With that in mind, the HOVR Machina is their stab at a shoe with a carbon- and Pebax-filled plate that combines with plush foam and a built-in Bluetooth chip to store and transmit info to a smartphone. The Bluetooth “stuff” is actually pretty cool, as the chip connects to the UA app to give live running feedback with basic pointers based around cadence. Post-run, you can actually analyze contact time, cadence, and even footstrike angle—identifying how much heel striking you did or didn’t do. From there, you can make attempts at adjusting your stride.

Without spending too much time on the Bluetooth side of the shoe—which some triathletes may find marginally useful or not very useful at all—it also helps automatically log how many miles you put on the shoes, whether you connect to the app while you run or not. The shoes also hook up to Bluetooth-compatible smartwatches to give cadence, but not much else.

In sharp contrast to the detailing on the Cloudflow’s, UA’s lightweight trainer has a pretty basic upper with a 3D woven mesh that looks almost one-piece, gives only the smallest amount of reflectivity, and has a foot opening with an insanely pillowy soft collar. It’s basically the exact opposite of On in terms of “this is something I’d like to wear to the store.”

But below the hood is where things start to get interesting: Though UA throws everything into this midsole with their foam and carbon/Pebax plate, the result is actually a ride that quite simply works. Unlike some of the other high-foam shoes out there that feel squishy, the HOVR Machina feels nice and soft on descents without getting that sinking feeling on flats and uphills. The carbon plate offers a very balanced push off that doesn’t shoot you forward, but also doesn’t throw you off rhythm or out of sync when you want to slow down. The funny thing is that most carbon-plated shoes right now don’t actually do a good job with the tuning that UA has somehow nailed here. And even though it’s two ounces heavier than the Cloudflow, you wouldn’t be able to tell while actually running at speed.

Even though it may seem a little unfair to pit both of these shoes against each other in the “lightweight trainers” category, it’s actually pretty appropriate. While the Cloudflows look like a great shoe on paper, the ride isn’t what you’d expect. On the other hand, the HOVR Machinas look like they’d struggle in the ride category and probably feel “off” with all that tech crammed into one shoe, but they feel and “run lighter” than the Cloudflows. For sure, the HOVRs are the clear winner on long runs at all speeds, and while the Cloudflows are a good choice for those who like that stiff road feel, their flat response made them a tough sell even on short, fast days.