K-Swiss, Pearl Izumi and Zoot release new tri-specific racing flats that will be raced in Kona

General wisdom says that the Ironman World Championship is almost always won on the run. A few people have ridden away from the pack and held on to their lead to cross the line first, but the majority of Kona winners have broken the field on the run, and three tri-focused companies have just released new weapons that their fastest athletes will be wearing in the race this weekend.

The Blade is a neutral race flat built on K-Swiss’ GuideGlide sole. This material—which feels more like Nike Lunar than the EVO rubber from which soles are typically constructed—is seriously light and gives the shoe a snappy 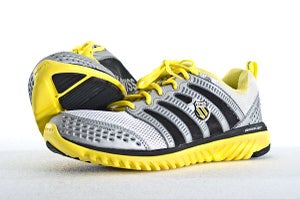 feeling. The soles are flexible in all directions but still provide a bit of torsional (twisting) resistance under the arch.

The front, heal and sole are all perforated for maximum ventilation and water drainage. It has a standard tongue that moves freely from the rest of the shoe. The shoe’s inner liner is smooth and comfortable without socks on, but the edge of the tongue can barely be felt on the top of the foot. The forefoot is moderately wide and the heal grips securely.

The I.S.O. Transition is a moccasin-style shoe that has its tongue built in with the rest of the shoe. Its generous heel loop and sturdy tongue create sturdy grip points to grab the shoe and yank it wide open for a seamless transition. Instead of standard laces, the I.S.O. Transition comes with standard elastic laces for quick transitions. The sole is perforated for water drainage and the mesh upper appears to be moderately breathable.

Pearl Izumi’s new racing flat is a true minimalistic shoe. Its heal is only slightly taller than its toe and a neutral sole 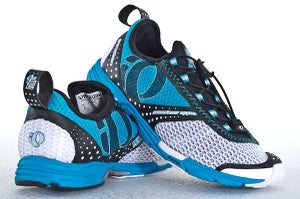 that has no pronation support. There is a small plastic bridge over the midfoot that resists twisting slightly.

Pearl Izumi-sponsored athlete (and two-time Kona champ) Tim DeBoom conveniently lives just a few miles from PI’s headquarters in Louisville, Colo. He was involved in the design of the I.S.O. Transition at every stage and his feedback regarding many different prototypes helped Pearl arrive at this finished product. He will be racing in them this weekend when he tries to regain the title of Fastest American Ironman. 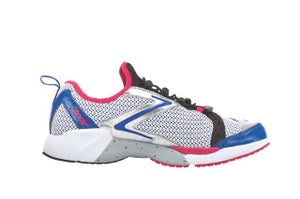 Zoot also has a new racing flat that is being worn by the likes of Kelly Williamson and Sam McGlone. They are also a moccasin-style shoe with the tongue integrated into the rest of the shoe. The inner portion has a continuous liner to be easy on the feet when running sockless. They have a bit of medial support as well as integrated elastic laces for a quick transition.

Ask a Gear Guru: What’s the Best Shoe for Every Kind of Trail?