It's important to know when to replace your running shoes.

As we get towards the end of the season, it’s basic human nature to think “my shoes are trashed, I can hang on a bit longer” or “yeah, my feet/shins/knees hurt, but I’m almost done” or “I’ll just get new shoes in the spring when the season starts back up.” If this sounds like you, you’re playing a dangerous game with your body. Now is a great time to check in with your gear and make sure you have what you need to finish your season, start your offseason, and think about 2022. First stop: Check your closet. Now ask yourself, “When should I replace my running shoes?” Read on for our guide on when to know it’s time for them to go and some of our favorite new replacement kick picks this fall.

When Should I Replace My Running Shoes? It’s Complicated.

While it may seem like a bit of a punt, there’s a reason no one can give you a definitive answer on when to replace your running shoes. Yes, there’s probably a little bit of running-shoe-brand marketing gimmickery at work, but the reality is that people’s running styles and biomechanics are about as complex as our varying body types. For sure there are 180-pound men who have “better”” running biomechanics (better, of course is relative, but in this case, we’re talking about how much impact and wear a runner inflicts upon their footwear) than a 100-pound woman. She might need to replace her running shoes 50 miles before he does.

There’s also the difference between shoes themselves: You could also argue that the changes going on in a soft, maximalist shoe will feel more pronounced, faster, than those in a shoe with a minimal, more structured midsole. But of course a minimalist shoe will wear out quicker, even if you don’t feel it. Then, of course it matters what type of surface you train on. If you run on grass all the time (But who does, that, really? Are we soccer players?), the natural cushioning of the flora underfoot will help keep those shoes from wearing out. Conversely, running on rough, rocky trails will wear out a road-focused outsole faster than smooth roads would, giving you the potential for a “false positive” when you might not really need to replace the shoe due to a worn-out midsole. So what do you do? Give up? Buy a million shoes? No, read on.

Related: The 21 Best Running Shoes For Every Kind of Run

When Should I Replace My Running Shoes? Some Guidelines.

According to author and coach Mario Fraioli in his Triathlete QA column, most running shoes last between 300 and 500 miles, and you should take about 100 miles off that range if they’re considered minimalist with less midsole/outsole material. Another good rule of thumb is looking for the outsole being worn out to the point where you’ve got midsole material showing. At that point, unless you’re routinely running on super rough trails (and they’re road shoes), there’s a good chance that those shoes have been “dead” for weeks already, and you should have replaced those running shoes a while ago, which brings us to the next point…

When Should I Replace My Running Shoes? Midsole Matters.

While the condition of the outsole is pretty important, a worn outsole is rarely the source of injuries (unless, of course, you slip and fall…). Also, wearing out the upper is technically speaking not necessarily a good enough reason to buy new shoes, though it’s also not a bad excuse. More often repetitive injuries from shoes are caused by worn “internals” in the midsole of the shoe itself. As we said before, this can happen faster on minimalist shoes, but it can also feel more pronounced on cushy maximalist shoes that compress fairly quickly, due to their inherent lack of structure that’s so popular right now. While there’s no surefire way to know that the midsole is worn out and it’s time to replace your running shoes, some telltale signs include deep creases on the sides of your midsole, where the foam shows through. (Check out the picture below, figure A, for a good example.) This will be particularly pronounced on worn-out maximalist shoes.

Otherwise, a good rule of thumb is if you head to a running store, and they let you try on shoes and go for a quick jog (don’t try them on carpet unless you do most of your runs on carpet…), if the shoes feel drastically different—in terms of impact absorption—then it’s probably time. That said, you don’t want to go to the shoe store every week, so what then?

When Should I Replace My Running Shoes? Track It.

The one thing that all shoe experts agree on is keeping track of your running mileage. Not only is it something you should be doing as a part of smart training logging, but it’ll let you know when you’re heading into the “Danger Zone” (queue Kenny Loggins, here). And if you wear the same shoes on the same terrain year-in and year-out (and don’t gain a crazy amount of weight or drastically alter your run form), you’ll start to get a good sense of how many miles they can handle before it’s time to head to the store and do that in-store test.

Anyone who ran cross-country in high school should be familiar with the old “write the date on the side of your shoes” trick that coaches would expound. While that still works—and is better than nothing—assuming you run a consistent amount of mileage from week to week, it’s 2021 now. We have apps for that.

If you already use Strava, like so many of us do now, they already have a built-in mileage tracker, and it’s just a matter of inputting your shoes and making sure you set the mileage threshold if you know it already. Garmin Connect has something similar if you already use a Garmin device, as do services like MapMyRun and Runkeeper. But just like the old gear-guy adage goes, “The best thing for you is the one you’re actually going to use!” So go with whatever you know you’ll stay on top of, and you’ll at least have a good sense of when to start thinking about replacing your running shoes.

What Should I Replace Them With?

Ok, so you’ve set up your tracking, you’ve been inspecting your midsole and outsole, and you’re heading to the store to get some new kicks. What’s hot this fall? With the help of Adam Chase, we’ve pulled out some of our favorite shoes from our exhaustive “21 Best Running Shoes For Every Kind of Run” guide:

Replace your road shoes with the… 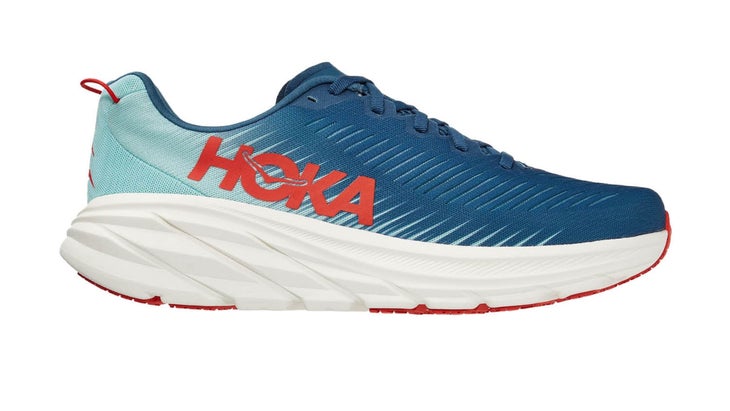 The Rincon 3 is right on the mark for long training runs, all in an outstandingly lightweight package. HOKA improved the third version with a vented mesh upper that features an asymmetric tongue and enhanced high-abrasion rubber coverage for durability. The midsole foam features dramatic cutouts of what was already super light full-compression EVA sculpted for a revised early-stage rocker shape that embraces the foot, providing full ground contact and a smooth yet quick acceleration to toe-off.

Replace your lightweight road shoes with the…

Saucony didn’t mess with the success of the first Endorphin Speed, but instead mildly tweaked the upper, while leaving this quasi-super shoe as-is—retaining its outstanding semi-flexible nylon plate. Round two features the same midsole PWRRUN PB foam as the Endorphin Pro to help it act as the performance trainer that it is, complete with a soft, smooth, and slightly bouncy ride. It remains versatile enough for effective running at faster paces for tempo workouts, fartleks, and intervals—as well as moderate paces for long runs.

Replace your trail shoes with the…

Versatility and durability are abundant with these shoes, especially if you prefer protection over lightness in weight and minimalist flexibility. The Trailfly Ultra G 300 Max has a firm, protective, and seemingly-indestructible midsole foam and is outfitted with an equally stalwart outsole. It is a well-tooled, dependable trainer that fares well on a wide variety of surfaces thanks to its midsole foam that is enhanced with Graphene — the world’s strongest and thinnest material, 200 times stronger than steel. To offset the firmness of the Trailfly Ultra’s G-Fly midsole, Inov-8 deployed deep flex grooves, helping the shoe adapt and react to uneven footing.

Replace your race shoes with the… 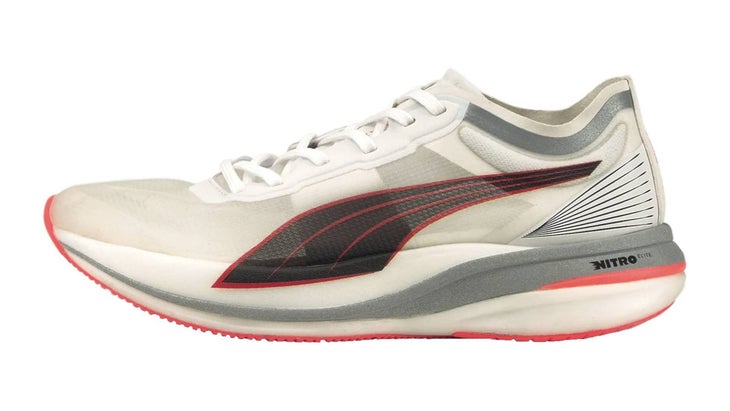 Puma’s Deviate Nitro Elites are best classified as “semi-super shoes” because they work well for most mortal runners and have some bounce but are neither rigid nor unstable—making them well suited for half and full marathons. The nitro-infused PEBA-based midsole foam is soft but not squishy, with a bouncy, responsive feel from touchdown to push-off. The rocker is present but with a more moderate, rounded curve than the sharp drop-off found on other super shoes. It’s also a bit less rigid, making the Nitro Elite more accessible, but also slightly reducing the propulsive roll and pop.