I usually associate Salomon with skiing/snowboarding, but I was recently surprised by two pieces of apparel from their trail running line that I really loved.

The only part of me that misses winter—since recently moving from New York to California—is the part that loves running in tights. They’re just more comfy. Without temps in the 20s and 30s, I rarely have a reason to don anything but shorts (I’m sure many Southern Californians would heavily disagree, but I am an intentional under-dresser). I found a solution in these Trail III tights, which are light and breathable enough to be considered a “spring tight” but still a little warmer than a short for chilly mornings. 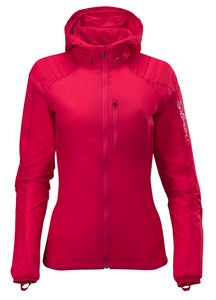 I had to get in a run during a rainy, warmish night last week and the Fast Wing Hoody Jacket turned out to be the perfect outer layer choice. It’s practically weightless, so you never have to deal with that I’m-sweating-under-a-rainy-jacket feeling, and it has big vents under the armpits for extra breathability. Three other huge points for me: a hood, thumbholes and the ability to pack itself into its own pocket.