Aftershokz’s latest offering, the Trekz Air, uses bone conduction technology that lets athletes listen to their music without interfering with their awareness.

Like most people who run or ride outdoors, the activity is rarely a solitary one. Running on busy sidewalks, riding on roads alongside cars, even running on desolate trails often requires a certain measure of awareness just to stay safe. In an effort to keep every sense sharp, many triathletes choose to forego their favorite music so as not to plug their ears and take one of those senses out of the equation.

Though the technology is not brand new, bone conduction headphones still seem to be an outlier in the sports audio world. Used most commonly in hearing aids, bone conduction tech uses tiny mechanical vibrations to entirely bypass the outer and inner ear, sending signals through the cranial (or jaw) bone into the inner ear instead of the ear drum. Your ears remain unplugged and still able to hear the outside world.

In the last 30 years, the idea made its way into other applications aside from hearing aids: Scuba divers have great success with bone conduction underwater; also the military has used the tech in order to retain environmental awareness while keeping in constant communication. Even Google used bone conduction technology on their ill-fated Google Glass when it was released back in 2013.

A few years ago, Aftershokz made a big effort by switching their military focus towards consumer athletics; since then their Trekz Titanium has been one of the better wireless options for triathletes. Though the experience is definitely different than normal earbuds or over-ear headphones, their latest upgrade, the Trekz Air, improves upon a lot of the things that made bone conduction a series of compromises.

We take a look at the ups and downs of the Trekz Air and bone conduction audio: 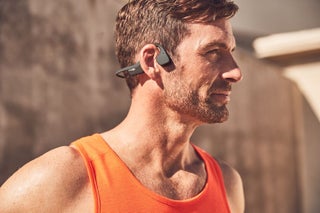 We liked the old Titanium, but found some of the inherent issues with bone conduction to take some getting used to. Fortunately, the Air has smoothed out most of our complaints. If you’re going to listen to music while training (bear in mind, USAT rules do not allow “headphones, headsets, walkmans, ipods, mp3 players, or personal audio devices, etc.” during races), this is by far the safest option. You can still expect to hear cars going by, the sound of people speaking, and even the sound of knobby tires on trails at certain volumes—all of which is very important for staying safe. While Trekz does include ear plugs to effectively close off outside sound for a fully immersive experience, if that’s what you’re looking for, these might not be a good fit. With that said, these are definitely the best headphones for people who want to listen to music and still keep all of their senses intact.

$150, Available for pre-order at Trekzair.aftershokz.com

Science Shows You Can Go Farther and Faster with Music