John Miller, Jim Hutchinson and Richard Geiger’s morning routines are the same as most athletes: wake up before the sun rises, stumble to the closet and scrounge around for a clean shirt to wear for a pre-work run. And, like most athletes, “clean” sometimes means “whatever passes the sniff test.”

Miller and Hutchinson, who are chemists, and Geiger, an engineer, approached their malodorous problem the only way they knew how: the scientific method. With a combined 70 years of experience in chemistry, material science and product development, the three set out to build a better laundry detergent for athletes.

“Living in Eugene, Oregon, we breathe—and smell—track and field and distance running,” says Miller. “The research itself was conducted between Hayward Field and Pre’s Trail, two of the most iconic landmarks of United States running.”

Their proximity to so many runners meant they had no shortage of stinky clothing. Using running clothes donated by Eugene’s disproportionate number of sweaty runners, the scientists were able to analyze just what caused those funky odors—and how to get rid of them for good.

Their research resulted in Defunkify, a line of cleaning products specifically formulated for modern athletic wear. The Active Wash is a proprietary blend of enzymes, minerals and sustainable plant-based ingredients. Unlike conventional detergents, which use chemicals to clean at a surface level and mask odors, the active ingredients of Defunkify Active Wash can get deep between fibers to unlock and remove the culprits behind persistent odor. A post-wash spray utilizing ionic silver coats the fiber to prevent smells from coming back. A third, optional step known as “Expedition Strength” coats the fibers with deodorizing molecules—this allows the user to wear performance gear for multiple days in a row (say, during a camping trip or while bike touring) without smelling.

But this isn’t your usual laundry detergent. “It’s a bit like riding a steel Schwinn bike and then switching to a carbon fiber Cervelo,” says Miller. “They may look similar, but one is more efficient and purpose built.”

Rather than rely on their eyes and noses to determine if their clothes were truly clean, they confirmed Defunkify’s effectiveness at removing residue with a scanning electron microscope. (Of course they did. They’re scientists.)

In lab testing, their product has been found to work better than other specialty washes for technical and delicate (like down) materials. “We haven’t found anything yet we can’t defunkify,” says Miller, though not for lack of trying: as they run, ski, cycle, and hike, they’re constantly attempting to create and find the smelliest clothes possible. Only this time, they all seem to pass the sniff test. 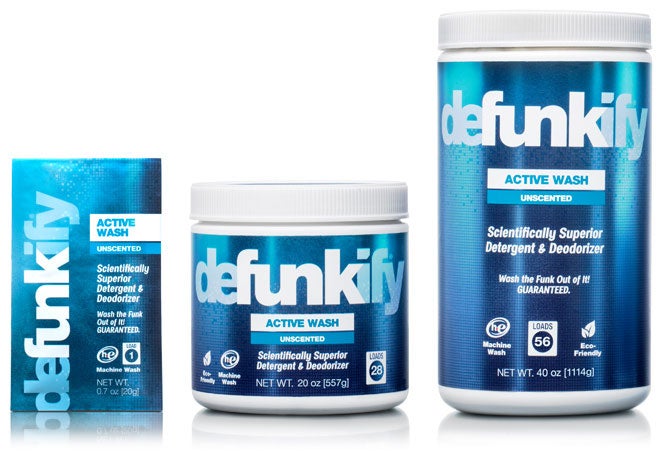 Testers took only two sets of running clothes on a week-long vacation—one treated with Defunkify beforehand, one without. After equal mileage on daily runs, the Defunkify-treated shirt, shorts and sports bra was markedly fresher at the end of the trip. We can see the advantage of using the product for destination races, especially if one’s kit will be wadded up and stashed in luggage for several days post-race.

We also utilized the Active Spray on a five year-old pair of bike shoes. The wearer’s spouse does not agree the odor is “the scent of greatness” and has banished the shoes from ever crossing the threshold of the home. Treatment with Defunkify Active Spray, which has a strong herbal scent upon application, did bring a significant reduction in unpleasant smells, though not enough to end the exile in the garage.

The Best Post-Workout Foods to Fight Inflammation and Boost Recovery