Campagnolo’s 2012 line will include the tri-specific components that will finally allow their 11-Speed component groups to enter the transition area in mass.

One of the world’s three major component manufacturers has been conspicuously absent from triathlon for the past three years. Campagnolo is arguably the most storied brand in cycling history, but when the company unveiled its current generation 11-speed road group sets back in 2008, the sets didn’t include bar-end shifters. Triathlon was left out of the party. It took them a few years, but Campy is now ready to cater to your needs. Its 2012 line will include three bar-end tri shifters, a TT crankset, tri brake levers, and a line of brake calipers intended for aerodynamic performance.

The lack of a tri shifter created a problem for triathletes wanting to run 11-speed Campy components. Since the Italian company is the only one of the three big component brands making an 11-speed rear derailleur and cassette, it was impossible to swap a shifter from another component group and preserve indexed shifting (distinct gears). A true Campagnolo devotee could have used older shifters in the friction shifting mode, but this new line of shifters will allow riders to utilize their derailleurs without compromise.

Campagnolo will make two versions of the new shifter for 11-speed components—one aluminum and one carbon—and a version for its 10-speed groups as well. Other than the shift lever material and number of gears, all three shifters function identically.

Much like the SRAM and Zipp R2C shifters, Campagnolo’s shift levers will return to the neutral position after shifting. They will not rotate to a different resting position as you shift gears. Campy calls this the “back to zero” feature. The shifters can execute up to three gear changes—either up or down—with a single throw of the lever. The neutral position where the lever sits while waiting for the rider to shift can be adjusted to rider preference. Campy says they have adjusted the internal shift mechanism to reduce the force required to shift between gears. The front shifter will allow the rider to trim the front derailleur position, that is, move the derailleur finely without shifting gears to ensure the chain doesn’t rub the derailleur. The levers have a concave section in the middle with the hope of allowing your fingers to ergonomically wrap around both sides. Both aluminum shifters weigh 167 grams and the carbon version weighs 155 grams. 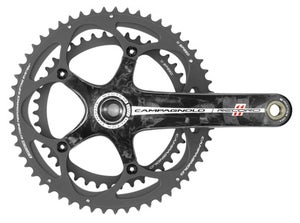 Campy is still rooted in road cycling, and that philosophy is reflected in the design of its TT crankset and chainrings. The crank spider and arms—the structural portion connecting the pedals to the chainrings—appears mostly unchanged. Rather than overhauling the crank for aerodynamic performance, Campagnolo created larger chainrings (55/42- or 54/42-tooth combinations) to allow a rider to hit a higher maximum speed than standard rings. The rings have been stiffened so they do not flex or sway any more than Campagnolo’s standard 53/39-tooth chainrings.

The new Campagnolo brake levers are not only light, but they also have a useful feature not typically found on tri brake levers. A quick-release mechanism is built into the brake lever that allows it to open slightly and allow for easy removal of the wheel. Unlike brake calipers from SRAM and Shimano, Campagnolo calipers do not have a similar release mechanism, so instead it’s built into the brake levers. This feature could be particularly useful on bikes with integrated brakes that can be difficult to release for wheel removal. They will be available with a carbon lever, weighing in at a measly 85 grams, and an aluminum version for 106 grams.

The Campagnolo U Brakes come in two versions. One version has a side-pull mechanism, similar to those used behind the fork of some current bikes, such as the Jamis line of triathlon bikes. The idea is to tuck the arms of the brake calipers behind the fork blades in the front and the frame in the rear, although the cable housing does jut out to the side. These will be available as both a front and rear brake. The second brake style will be a center pull brake, similar to the front brake on the Specialized Transition, but instead designed for the rear of the bike. This caliper routes the cable straight down into the brake, allowing the cable to be positioned within the boundaries of the frame rather than extending off the bike. In order to use this caliper, your bike must have a hanger to mount the housing against.

What Size Tri Bike Should I Get?