Parlee’s refreshingly uncomplicated stock TT is sold as a frameset only (frame, fork, headset, seat post and rear brake) for $3,900. 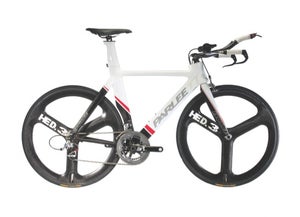 Based in Peabody, Mass., Parlee Cycles is among the lesser-known American bike manufacturers. It’s not Cannondale or Trek, and it definitely isn’t trying to be. The modest operation churns out 3,000 bikes each year, most of which are full custom and carry a hefty price tag. Parlee unveiled a made-in-China stock version of the TT last year, which is offered for about half the price of its custom cousin.

I’ve always admired the simplicity of Parlee’s bikes, and the stock TT is one of the cleanest triathlon frames I’ve ever come across. The tubes may seem somewhat elementary when compared to rides like the Specialized Shiv, Blue Triad and Cannondale Slice, but don’t let the vanilla lines fool you—this bike is damn quick. The brand’s namesake, Bob Parlee, formerly built carbon fiber racing boats and no doubt picked up a thing or two about eliminating drag in his previous career.

A benefit of the TT’s unadorned design is its ease of operation. The cables enter the frame neatly, just behind the steer tube, with internal guides running the length of the downtube. We found Parlee’s five-position seat post incredibly easy to wrench, thanks to the independent adjustability of the saddle height, tilt and setback. Seat angles reach as steep as 80 degrees with the clamp on the front-most position and as shallow as 75 degrees with the clamp on the other end of the seat post.

The feature that makes this ride truly lust-worthy is that every size of the stock TT has two optional headtube lengths. For example, a medium-sized frame can be built with either 100mm or 120mm of headtube height. This makes the TT a great option for athletes who can’t find a comfortable toptube/headtube combination on standard stock frames. Parlee encourages athletes to select an aerobar before selecting headtube height as some bars ride lower than others. I opted for a 120mm headtube on my medium test frame (51.5cm toptube), coupled with a Hed Blackdog aerobar. The extra tubing up front helped alleviate some lower back stress, while the aggressive design of the Blackdog bars kept me feeling almost fast.

When it comes to aerodynamics, Parlee’s primary concern was making the TT quick in real world conditions. The result is a narrow frame lacking any mammoth tubes, which can become aero nuisances when exposed to crosswind. While the size of the tubes is relatively small compared to a number of popular frames, the trailing edge of every tube is noticeably sharp. By using sharper edges on smaller tubes, Parlee was able to keep the weight at a modest 1,200 grams for a mid-sized frame. This means building the frameset into a 16- to 17-pound complete bike is doable if you have something left over after buying the frame.

The TT packs all the standard drag-reducing features like an internal cable run and horizontal dropouts. It’s void of anything that could be considered a watt-saving gimmick, save for the placement of the rear brake underneath the chainstays. It’s a gimmick we’re OK with. The rear calipers are almost invisible from any angle and are surprisingly easy to wrench with the frame turned over.

Parlee sells only framesets for the TT, which includes the seat post, fork, headset and the funky rear brake. We built up our medium-sized (51.5cm toptube) test frame with a Dura-Ace 7900 group, Zipp 303 wheelset and an evil-looking Zipp VumaChrono crankset.

On the road the Parlee TT was one of the most balanced time trial bikes I’ve ever tested. Even with the extra headtube height (I typically ride a 90mm headtube) the TT felt plenty steep with the saddle mounted all the way forward. The frame’s front end handles comfortably from the basebar or aerobars and had no problem holding a line on a group ride. On long, flat sections the TT offers a markedly forgiving ride—a nice plus if your morning ride involves a few stretches of ancient road. I would liken the ride to a Cervelo P3C, only slightly less aggressive and a bit softer on the road.

Parlee also offers a top-dollar, made-in-America, fully custom version of the TT for $8,500. Both the custom and stock models can be custom painted. For more on either model, head to Parleecycles.com.

Your Bike Mechanic Hates You (But They Don’t Have To)