Like my fellow editors, I am often asked to try out triathlon bikes from a variety of bike companies. Unlike the others, I often have to turn down the opportunities. Not because I am unwilling, but because my petite 5’3” frame makes it difficult to be comfortably fit to most of the bikes the industry offers.

A few weeks into training for Ironman Arizona, I was given the chance to try out a brand new 2010 Scott Contessa Plasma. I could ride it through my training and, if I liked it, give it a real test ride in my first Ironman. I immediately looked up the specs of the Contessa Plasma and was excited to see that it offered an XXS frame (47 cm). I was less excited to see that even the XXS frame came with 700c wheels. Prior to trying out the Contessa Plasma, the only bikes that I had been comfortably fit on were outfitted with 650c wheels. I was a little hesitant about how the bike would fit, but I told them to send it and I’d test it out. 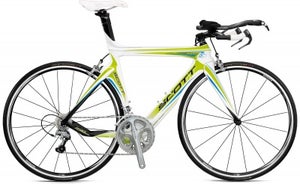 My first impression of the built bike was how beautiful it was. Scott does the best job of creating female-specific bikes that offer a feminine look, without going overboard with flowers or a pink paint job. The neon green and electric blue on the white background are fun and spunky without being too flashy.

Next up was getting fit to the Contessa Plasma at Nytro Multisports in Encinitas, Calif. The fit was much quicker and smoother than I had anticipated. Nytro’s Walt Downey took all of my measurements and got the bike to fit me perfectly, but not before a nerve-wracking moment. Unlike most bike manufacturers, Scott makes its bike with an integrated seatmast. That is, the seat post is a part of the entire frame. Achieving the proper seat height means cutting the actual frame. Downey took my measurements and realized that he would have to cut the seatmast as low as it will go. After triple checking the measurement, he cut the seatmast  and there was no going back. If you are also a petite female, be aware that purchasing the Contessa Plasma means that sharing or selling your bike in the future means you’ll have to find someone with similar measurements. It also means that test riding is next to impossible.

Luckily, the fit and feel of the Contessa Plasma mean that you are unlikely to want to let anyone borrow or buy this beauty. While it took a few pedal strokes to get used to the 700c wheels, I was impressed with the bike from the beginning. The biggest initial difference I noticed between the Contessa Plasma and other bikes I have ridden is that the bike’s geometry lends to a more comfortable aero position. I have had similar fittings on other bikes but have never felt so natural in the aerobars. I took this as a good sign that I should be riding the Contessa Plasma in my first Ironman race.

After a few months of riding, I put the bike through its first real test at the Soma half-iron distance triathlon in Tempe, Ariz. I couldn’t have picked a better race to show the difference in riding 700c versus 650c wheels. The three-loop bike course features a few tight turns and several 180-degree turnaround points. The day before the race I practiced 180-degree turns over and over again, but my confidence was still lacking. Bigger wheels on a smaller frame mean less control on tight turns. But in the race, it took one lap on the bike for me to feel confident on the turns. While I was never flying around any corners, I was positive I could make the turns with ease.

Four weeks later I brought the Contessa Plasma back to Tempe for Ironman Arizona. I was excited to see that only Linsey Corbin and I had the 2010 version. Although I didn’t bike a 5:05:07 like Corbin, I couldn’t have picked a better bike to take on the 112 miles. I had ridden on the Beeline Highway in the past, and I knew the headwinds could be brutal. Race day did not disappoint and strong westerly winds plagued the course. I was thankful to be on a comfortable bike heading into the wind. Not once on the first lap did I feel the need to get out of my aero position. Once on the ride back to town, I put my head down and let the aerodynamic frame push me. With very little effort, I more than made up for the slow ride out of town. During laps two and three, my focus was less on the feel of the bike and more on the pain of my stomach. Luckily, I was comfortable out of the aero position and the saddle provided enough support that sitting up for much of the bike did not translate into lower back pain on the run.

Now with several training hours and two long-distance races logged on the Contessa Plasma, I am thankful I gave the bike a chance. Not only is the bike good looking, comfortable and efficient, the 47 frame on the 700c wheels has allowed me to share race wheels and avoid the frustrating experience of searching for equipment for 650c wheels.