At first glance, the Quintana Roo Cd0.1 looks similar to many other high-end tri bikes: clean lines, narrow profile, hidden brakes and steep geometry. While the Cd0.1 shares many characteristics with its competitors, it boasts a unique design innovation that might give it an aerodynamic edge over every other bike on the road.
Written by: Aaron Hersh

QR pioneered modern tri bike geometry back in the 80s and now is taking “long and low” to a new extreme with the Cd0.1. The tiny head tube creates a small stack value relative to the reach, which means this bike can only be ridden steep. Very steep. Thankfully, the seat post can accommodate an effective seat tube angle up to 82 degrees. Although this tri-specific geometry has been validated over the past decade, the Cd0.1 stack value is so short that it makes finding a comfortable position a challenge for many, even those fully committed to a steep seat-tube angle. It lets the super-flexible among us ride low enough to kiss the front tire, but creates a problem for those who are not as limber. Regardless of flexibility, this position loads the front wheel with a lot of weight and makes handling squirrelly. The Cd0.1 is controllable and corners similarly to other long and low bikes that dominate the tri bike market but it won’t be mistaken for a road bike. 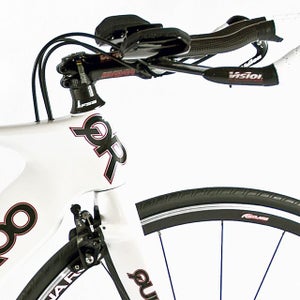 The front brake hides behind the crown of the fork and requires a side-actuated caliper, which is simple to adjust. The housing routes down the side of the head tube before turning to meet the brake. This routing pattern leaves the housing exposed to the air but keeps the friction between the cable and the housing low, which allows the brake to smoothly actuate.

The rear brake housing enters the bike behind the stem and is concealed within the frame until it pokes out beneath the bottom bracket. This elegant routing pattern keeps the housing hidden from the air and still lets the cable slide smoothly. The cable, however, runs into friction after leaving the bottom bracket because it is forced to take a sharp turn before meeting the center pull brake caliper. The center pull design prevents the brake from being easily bumped out of position and the strong return spring helps overcome some cable friction.

Both the front and rear shift housing slot into the frame behind the stem and are guided by internal tubes all the way to the derailleurs. Like the rear brake housing, this internal route is both aerodynamically clean and easy to use.

QR combined successful design features from many of the top aero rigs for the Cd 0.1. The head tube, downtube and chainstays are sleek and deep. The fork blades are bowed out far from the wheel to allow air to slip cleanly between the gap. Housing is effectively hidden, except for the front brake, and the seat post clamp is clean and minimalistic. The seat tube elegantly shields the rear wheel and brake, although some aerodynamics experts will dispute the effectiveness of a tightly tucked wheel. Every detail has been attended to.

There is nothing groundbreaking or even controversial about the tube shapes, but Quintana Roo certainly strayed from convention when it pushed the down tube away from the center of the bike and toward the drive train.

Although the downtube has a conventional shape, its placement on the bike is anything but standard. Rather than splitting the bike down the middle, the downtube is offset toward the drive side of the bike. The aerodynamic explanation from QR for this bizarre placement goes like this: The drive train contributes a major portion of the aerodynamic drag of a bicycle so diverting air to the non-drive side reduces drag. By shifting the downtube toward the drive side, more of the air that comes off the front wheel will be directed to that side. Pretty simple.

This progressive design comes with a nice story, but does it work? Quintana Roo says the Cd 0.1 has the “lowest drag coefficient ever,” but so do about a dozen other manufacturers. Unfortunately there is no unbiased wind tunnel data on the Cd0.1 or the offset downtube design, so we are forced to assess the design with theory and educated guesses. That said, there is no question it’s an intriguing idea that might genuinely reduce drag. Combine the unique downtube with the proven design features found throughout the bike and the QR Cd0.1 is a tempting rig for any triathlete dedicated to getting low.