Fuji’s most known for it’s low to mid-price point bikes but Fuji is more than capable of producing a first tier race machine, and the D-6 goes a long way to prove it. 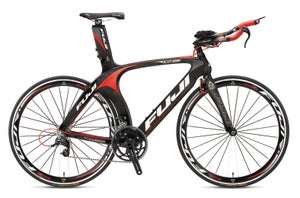 Although I can’t definitively comment on the aerodynamics of the D-6, the headtube, seat tube and chainstays follow design convention with a narrow and deep profile. The bike strays from traditional aerodynamic design with wide fork blades and an enormous cluster of carbon at the junction of the seat and headtubes. Aerodynamics experts seem to agree that wide fork blades are slower than thin, but the jury is out on the effectiveness of unconventional shapes at the rear of the bike.

In the 1930s, German aerodynamicist Wunibald Kamm discovered that a teardrop-shaped object retains most of its aerodynamic qualities if the tail is lopped off at the point where cross-sectional thickness is half of the maximum. This truncated airfoil is now called the Kammback or Kamm tail. Automakers have been using this shape (think Toyota Prius) since 1940, and the bike industry finally got on board when Trek unveiled the Speed Concept in 2009. The D-6’s rear brake shield doesn’t adhere to the traditional Kammback design, but the giant wad of carbon that ends abruptly at the rear brake might not be as much of an aerodynamic problem as it appears to be because of the Kamm effect.

The brakes are the most unique attribute of the D-6, and they are a problem. Fuji went with flash (and maybe a small aero boost?) rather than functionality when it hid the front brake behind the fork and the rear brake within a cavity behind the bulbous seat tube-toptube junction. The hidden attachment points can only accommodate the Tektro R725 brake caliper. The calipers themselves don’t hurt braking performance, but the undulating brake housing routing pattern certainly does.

The front brake housing feeds through the top cap, down the headtube and pops out of the fork blade. Routing through the headtube is a creative way to hide the cable, but this pattern forces it to trace two loop-de-loops and creates a lot of friction between the cable and the housing. This friction seriously hurts braking performance and the front caliper lacks stopping power. After coming out of the fork, the housing protrudes into uncut air before looping back onto the caliper. The marginal aerodynamic efficiency gained by hiding the brake and housing is partially negated by the drag created by the exposed piece of housing.

The rear brake housing enters the toptube behind the stem and takes a sharp 90-degree turn just before meeting the caliper. This final kinked segment of housing scrapes the cable and creates a lot of friction. The caliper adjustment points are accessible but difficult to reach. These problems combine to make the rear brake finicky. It works better than the front but still isn’t great.

Fuji did hit the mark with the seat post system, however. The D-6 uses a sliding seatmast rather than a traditional seat post. The sleeve attaches reliably to the mast and creates a solid platform for the saddle. Unlike many seatmast bikes, a size L D-6 fits in a Trico Ironcase or cardboard bike box—great news for frequent travelers.

The D-6 comes in seven different sizes, all of which are built around triathlon-specific geometry. It sports a slack-ish 76-degree seat tube angle, but the saddle attachment allows for a couple centimeters of forward adjustability. The middle sizes have conventional stack and reach values but the outlier sizes are a little funky. The XS has a much shorter reach than many other very small bikes. The L and XL sizes have a short stack that might cause issues for taller riders. In fact, the M/L and L sizes have identical stack values. The small headtube on the big frames explain why 6’5” Matt Reed chooses to ride his D-6 with down-turned bars, which raise the rider, and several centimeters of headset spacers.

The D-6 is competitive in the “price no object” category when equipped with top shelf parts, but it is a showstopper at $3,150 when built with cheaper materials and spec’d with SRAM Rival, Profile T2+ bars and other budget sensitive components. The D-6 Comp is an eye-catching option boasting first tier ride quality for a terrestrial price.

Seconds lost through a corner are just as valuable as seconds lost to the wind, and Fuji built the D-6 with this reality in mind. The D-6 is just as comfortable turning as it is going straight. It holds a line through sweeping corners and screaming descents so firmly that there is no need to get out of the aerobars. Grabbing nutrition from aid stations and fiddling with behind-the-saddle hydration is no problem. In short, it inspires confidence. The D-6 is as much fun to ride as any tri bike on the market, and it belongs in the elite company of the Orbea Ordu and Look 596 when it comes to ride quality.

What Size Tri Bike Should I Get?