A quick look at what you can find in the April 2010 issue of Triathlete Magazine. 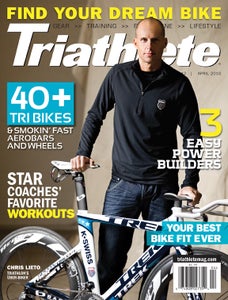 The April 2010 issue of Triathlete, which will be on newsstands March 16, brings you the annual bike buyer’s guide, complete with the best aerobars, wheels, saddles and more than 40 tri bikes, ranging in price from budget-friendly to “price is no object.” Cover guy and über biker Chris Lieto shares in an in-depth Q&A about his score to settle after being passed at the 2009 Ford Ironman World Championship in the final miles of the run. For the training feature, Senior Editor Matt Fitzgerald speaks with three star coaches—Lance Watson, Torsten Abel and Dave Scott—who give their advice on brick workouts, just as the triathlon season ramps up.

How to Flip the Script to Take Control of Stressful Situations