Triathlete magazine senior editor Aaron Hersh studied the Giant Trinity Advanced SL, the Specialized Shiv and the Trek Speed Concept 9 Series to see how they perform not as time trial (TT) bikes, but as triathlon bikes. Read the review by Hersh, and then scroll down to see detailed photos of all three bikes. All photos by Triathlete photo editor Nils Nilsen. 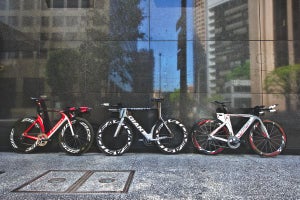 Every inch of a bike contributes to its aerodynamic drag, but its leading edge is the most critical because it hits clean, undisturbed air. Engineers have refined nearly every component on the front end of the fastest tri bikes—wheels, fork, headtube, aerobars—in order to minimize drag. The only exception is the system that attaches the aerobar to the frame. These inefficiently shaped tubes, called the steerer tube and the stem, jut out into the wind and create a huge portion of the bike’s aerodynamic resistance. Giant, Specialized and Trek believe that improving this attachment system is the next frontier in bicycle aerodynamics, and all three companies just released show-stopping tri bikes that feature groundbreaking handlebar attachment systems.

Some preexisting tri bikes boast integrated systems such as those on the Shiv, Speed Concept 9 Series and Trinity Advanced SL, but these three rigs have taken aero bike design up a level. Specialized, Giant and Trek are three of the world’s biggest bike brands and they threw their resources behind the development of these bikes that smaller manufacturers cannot match. Each brand asserts its bike is the fastest in the world—the industry’s most experienced aerodynamicists have honed every detail on these machines.

All three are phenomenally aerodynamic, but a bike must have more than a low drag coefficient to be ideal for triathlon. It needs to fit correctly, carry nutrition and function smoothly because, unlike road time trialists, multisport athletes ride long distances then get off and run. We studied the Giant Trinity Advanced SL, the Specialized Shiv and the Trek Speed Concept 9 Series to see how they perform not as time trial (TT) bikes, but as triathlon bikes.

The Shiv and the Trinity Advanced SL both support the aerobar from beneath with an aerodynamic nose cone and clamp it from above with a flat stem. This system transitions directly from the aerobar to the frame and eliminates the empty space behind the steerer tube that generates a massive amount of aerodynamic drag. The nosecone elongates the airfoil shape at

the front of the bike and, again, reduces resistance. The Trinity Advanced SL and the Shiv boast the most extreme, aerodynamically uncompromising front ends of any aero bike today.

The Trek Speed Concept 9 Series has a radically different leading edge than the Shiv and the Trinity Advanced SL. Rather than adding an aerodynamic nosecone to the front of the bike, Trek replaced the conventional stem with a proprietary line of aerodynamic stems created specifically for the Speed Concept. These pieces, like conventional stems, attach above the headtube and extend out and up from the frame. This system is drastically more aerodynamic than a traditional aerobar attachment system because it replaces the round steerer tube with a highly-tuned airfoil. Trek makes six different versions that can be swapped out to alter the height or reach of the aerobars, just like a conventional stem.

Replacing the stem and steerer tube with a more aerodynamic bar clamp is simple. The hard part is making a streamlined clamp that can accommodate a wide range of cyclists. Both bar attachment styles are dramatically more aerodynamic than a traditional stem and steerer tube and drag characteristics alone are enough to make these three bikes excellent time trial machines. While a pro time trialist is coddled by a staff of glorified caretakers after a race triathletes, however, have more work to do after dismounting the bike. Our race is only just starting at T2 so a triathlon bike needs to fit comfortably to allow the athlete to run fast off the bike. No matter how aerodynamic, a tri bike must fit the rider, and these three machines all fit differently.

Traditional stems come in a variety of lengths and angles, which allow a single bike to accommodate many different fits, but the unique front-ends on the Shiv, Trinity Advanced SL and Speed Concept are not compatible with conventional stems. This means that each bike’s fit characteristics are determined only by the components its manufacturer provides.

The Shiv was designed as a TT bike, not a tri bike, and Specialized makes no apologies for that. It has a slack seat tube angle and a long reach from the saddle to the handlebars. The aerobar extensions and pads can be raised with shims but they cannot be drawn back to the rider. These fit attributes mean that the Shiv is only appropriate for athletes that ride in an old-school position, similar to a road time trialist.

The Trek’s front end does not transition from the aerobar to the frame as elegantly as the Giant or the Specialized, but the Speed Concept can fit nearly any triathlete because of its versatile aerobar attachment system. The frame is built around F.I.S.T. approved, triathlon-specific geometry. Instead of offering only a single-length piece to attach the aerobars, like the Specialized and the Giant, Trek’s six different stems allow it to cover the complete spectrum of fit preference. The highly adjustable Bontrager aerobar that comes with the Speed Concept 9 Series allows the position to be tweaked to perfection. Trek’s system not only matches the adjustability of a typical tri bike, but it exceeds it.

All three of these bikes are aerodynamic marvels, but the Trek is a triathlon bike, and the other two are TT bikes that can be used for triathlon. The Specialized Shiv or Giant Trinity

Advanced SL would make an incredible triathlon bike if either could accommodate your personal fit specifications. They are stable, stiff and insanely aero. Just make sure the bike fits before opening up your wallet. I don’t know which of these bikes is most aerodynamic and I’m not going to guess, but the Trek Speed Concept is built around versatile, triathlon-specific geometry and is decked out in multisport-friendly accessories. The other two cannot accommodate the some common triathlon fit preferences. The Speed Concept 9 Series’ combination of fit, adjustability, aerodynamics, drop-dead good looks and usability make it the best triathlon bike on the road today.