Tim O’Donnell is believed by many to be the best hope for an American to reach the podium in Kona this October and the former short-course racer will take his first crack at the Big Island aboard the all-new Argon-18 E-118. 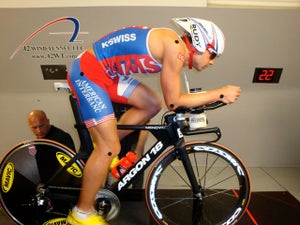 Click here to view a photo gallery of O’Donnell in the wind tunnel.

O’Donnell went to the A2 Wind Tunnel in North Carolina with his Cycling Performance Adviser Mat Steinmetz to optimize his position on the new E-118. Steinmetz, who is also Retül’s fitter specializing in triathlon and time trial, brought a Retül system to ensure O’Donnell’s critical fit dimensions weren’t altered as they experimented with minor position changes. Steinmetz has been working with O’Donnell to refine his position for two years and they wanted to make sure the changes they tried in the wind tunnel conform to O’Donnell’s well-established fit parameters. “There is no point chasing drag numbers in the tunnel is the rider is unable to pedal the bike,” says Steinmetz.

First, they tested O’Donnell on his current bike, the E-114, then replicated the test on the next-gen E-118 that he will race in Kona. According to Steinmetz, “at first we didn’t see the big reductions in drag that the Argon-18 engineers had expected based off CFD development and bike-only wind tunnel testing compared to the E-114. Then I lifted the [Profile Design Aerodrink] bottle on the new bike and boom, there it was.”

Aboard the new machine, Steinmetz played with dimensions without dramatically altering O’Donnell’s leg or torso positioning. “We found in the tunnel for T.O. that getting narrow with higher arms was faster. We changed hand height and arm width but we didn’t change the position. Just ergonomics,” says Steinmetz.

O’Donnell raced the E-118 to a win at Ironman Calgary 70.3 this past weekend and says he could immediately feel the improvements. “The bb is 4-5mm lower than the old one and it’s definitely more stable,” says O’Donnell. “Cornering it’s a little steadier and, in my opinion, the biggest improvement is in the front end.” The E-118 uses a substantially different aerobar attachment system than the current model.

The E-114 is only compatible with Argon-18’s proprietary bar, but the new model that O’Donnell is riding has an entirely new system that can clamp any 31.8mm aerobar. This system allows from a few centimeters of reach adjustment but no stack adjustment other than what is offered by the aerobar. The aerobar is clamped to the stem piece in a metal bracket that can be flipped to create two distinctly different reach dimensions separated by a few centimeters. The attachment system cannot lift the bars, but Argon-18’s aerobar and the Profile-Design Prosvet / T1+ Viper aerobar that O’Donnell rides both allow for rise adjustment, which Tim requires to match his ideal fit coordinates.

Argon-18’s aerobar raises the stack dimension by lifting the elbow pads above the basebar with spacers. The basebar position cannot be lifted, but Argon’s bar can be flipped upside down to raise the brake grip position substantially.

“The new front end is way lighter,” adds O’Donnell. “It’s almost like a clamp on the frame. It eliminates the steerer tube. It’s a pretty ingenious setup. It’s just a clamp, normally where the steerer tube comes up through the frame there’s nothing there.”

The fork has a wide opening around the tire just beneath the fork crown and it mounts a side-pull V-brake behind the fork arms. O’Donnell reports, “both [brakes] perform better than the ones on the E-114.”

The seatpost clamp hardware is cleanly tucked behind the top tube and doesn’t protrude above the top tube.

T.O. obviously loves the bike. “It is lighter, stiffer faster and I think they’ve hit a homerun with this bike.”