Helmet options for triathletes have come a long way in the past few years. These three new options showcase unique features that will appeal to a variety of triathletes.

Who should check it out: Gearheads

Shown here in a special edition Kona paint job, Lazer’s $350 Wasp Air Tri may be the ultimate in head protection.

The shell has two methods of heat relief. As expected, the vent on top provides air flow. When you need more relief, you can click out the two-position lens to create an air passage between the top of the lens and from rim of the helmet.

Want additional cooling? Lazer has what it calls an aquavent on top of the helmet. Water can be squirted into the port, channels inside send water around the head and out the back. Wet head, dry eyes.

This helmet does heart rate too with Lazer’s LifeBEAM sensor. It’s ANT+ and Bluetooth 4.0 and tested to withstand motion and moisture and will run you an extra $130.

The helmet also promises to help you maintain the optimal aero position with an inclination sensor that can sense as little as 2 degrees movement. Program it to vibrate when your head drops out of position, then clip it onto the back of your helmet. The sensor runs an extra $100.

Chose between four color combos, two of which let you change out the trim and the vent screen for a different look. Lazer’s long tail can also be clipped on for a more aero advantage. 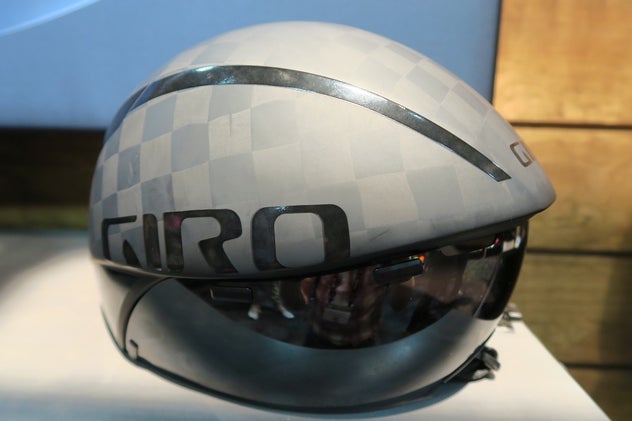 Who should check it out: Speed freaks

Giro also put some flash into its premiere, tri-focused head protection. They call it the Aerohead Ultimate.

The helmet was developed to be the slickest possible, that means no vents in the shell. To make up for the lack of a breeze corridor, Giro equipped the Aerohead with a retention system called Roc Loc Air Fit that suspends the helmet slightly, allowing air to pass under the shell and over the head. Internal channeling funnels the flow of air out the back. The shield is also vented.

Textreme, a carbon-fiber reinforcement technology, is the magic potion that makes this helmet a performer. When Formula One began layering Textreme into cars, Giro took notice. It creates the checkerboard look and Textreme’s integrated flat carbon fibers make for a strong, light material. Giro used those advantages to reduce the frontal area of the helmet. The Aerohead Ultimate is sleek and slippery, saving 17 watts over the Advantage in wind tunnel test, but still meets CPSC standards. For peace of mind, and an added bit of protection, energy deflecting MIPS is standard.

The shield has a magnetic attachment. As the athlete rolls out of the transition, the visor can be pulled from its holding place on top of the helmet and clicked into its ride position.

Giro has attempted to put an end to the head band with Hydrophilic padding. The claim is that it can absorb up to 10 times its own weight in water, so it’ll keep the sweat out of your eyes. It is also antimicrobial to reduce odor.

Pricey at $550 but it comes with a pod and a second, clear shield. 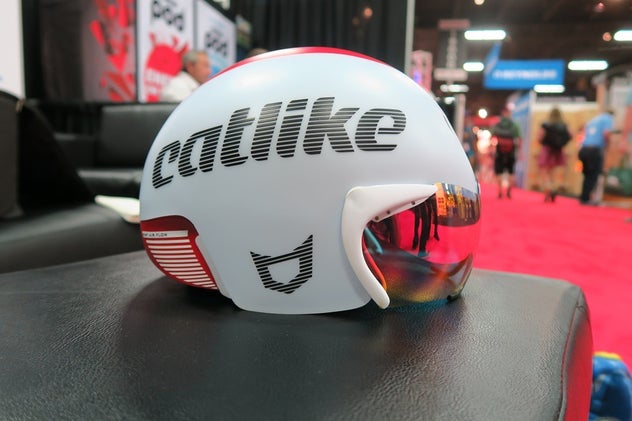 Who should check it out: Overheaters

Catlike believes cooler heads will prevail, especially in the sweltering heat of a summer Ironman. The Rapid Tri is the Spanish company’s well-vented aero answer.

Catlike manages airflow with its Tri Ventilation design. The forehead vents whoosh fresh air over the head. Both vent holes have dedicated, internal channels and exit ports out the back. The idea is to move air quickly through the helmet and minimize turbulence.

Part two of the Tri Vent system are vents on the sides of the visor. The air flow over the ears could be noisy but Catlike notes ears are part of the thermoregulation system so passing air over them can be a key way to prevent overheating.

Catlike drilled down on the padding, too, to address heat control. The company has a technology called Outlast that it says absorbs heat when head temperatures rise.

The Rapid Tri comes in two colors and ships with two shields, but for now is only available in one size: medium. A small and large should be in the lineup by early next year. $385.

What Was Hayden Wilde Wearing Under His Helmet at The Collins Cup?

What to Wear for Bike Rides, by Temperature