No longer do you need a battery the size of a water bottle to power a light bright enough to see the road or trail in front of you. With new LED technology and better battery capacities, front lights have become more compact, more versatile, and less expensive. Whether you are commuting, riding at night for the pleasure of that tunnel-vision experience, or using a light to add a bit of safety to your rides, an array of front lights have hit the market in recent years that are far more advanced and convenient than their predecessors.

The experts at Velonews.com chose to take a closer look at five front lights for cycling, all of which have at least an 800-lumen rating. What’s a lumen? Essentially, it’s a measure of the total quantity of visible light emitted by a source. What’s important to note is that just because one light has a higher lumen rating than another, that doesn’t mean it is necessarily better than another. Other factors, like where the light is cast, have an impact on the light’s overall quality.

All of the lights tested are rechargeable via a micro-USB port. There is no reason to use disposable batteries in this day and age.

How to choose a light

First, it helps to know your primary use for the light. If you’ll mostly be using it in urban settings, look for lights with enhanced side visibility, which helps you to be seen at intersections and when coming out of road junctions. Will you be hitting the singletrack path on the way home from work, or just riding the trails at night for pleasure? Brighter is often better but consider the beam shape. Most of the lights we tested have roughly a round beam. However, we found that a more horizontal or squared-off beam (like that on the Specialized Flux 1200) has advantages. Primarily, you’re not wasting energy and beam power illuminating the trees above you or other things that are less relevant to seeing ahead.

Also, consider if you’ll often be swapping the light between bikes. If so, you may consider a strap-style mount — which has the additional benefit of fitting on bars that aren’t round, unlike the bracket-style mounts. There are also now many lights with a quick-release mount.

When it comes to durability, know that lights will take a beating if they’re going to be used often, subject to the elements. Look for lights with weatherproof seals and solid construction.

Now let’s jump into the lights.

The Flux is one of the simplest, cleanest designs we’ve tested. Its CREE XP-L LED double-beam light casts a wider horizontal beam for increased visibility to the sides of the trail or road and, therefore, your line of vision. The steady modes comprise 1,200-, 600-, and 300-lumen settings, with an estimated 1:15-, 2:30-, and 5-hour runtime. Our tests confirmed that these estimates were accurate. A short press-and-hold turns off the light. A long press-and-hold allows you to access secondary modes: daytime flash, steady wide + narrow flash, camping flashlight, and emergency low. An extra-long press-and-hold locks the light for traveling. Specialized claims a 90 percent fast charge in 1.5 hours and a full charge in 3 hours.

The quick-release-style bar mount is easy to install, clean and simple, and holds solid to 22.2, 25.4, and 31.8-millimeter bars. Thin, grippy, rubberized strips on the inside surface of the clip help it grip the bar. Conveniently, the mount allows you to center the light in front, above, or below the stem with a long reach to work around most computer mounts and shifter/brake cables. All that being said, the clip is not perfect. Sometimes it would appear to be fully locked into the mount, but it was not. It took a lot of force to snap in and release. It was better once mounted on the bike.

Furthermore, in order to re-aim the light’s beam, you must fully loosen the bar clamp quick release — impossible to do while riding. A separate hex screw where the mount meets the light allows you to rotate the lamp, but only in large increments.

If you’re someone who won’t often be re-aiming the beam or switching lights between bikes, you’ll have no problems. But if you expect to tilt your beam up and down depending on where you ride and whether it’s day or night, the Flux 1200 is a bit finicky. The trade-off is a rock-solid mount once in place.

The Knog PWR Trail is, first and foremost, an elegantly designed 1,000-lumen headlight. However, it’s more than that. The light is part of a greater line of bike products and yet-to-be-released outdoor products designed to share a battery. The Trail falls in the middle of the current PWR line, which ranges from 600 to 1,800 lumens, and three battery capacities from 3,350 to 10,000mAh. You can swap the head containing the light between the bodies housing the different battery sizes (or buy a second as a spare). Pull the head off and the battery can be used to charge your USB devices and other electronic devices like phones and head units. 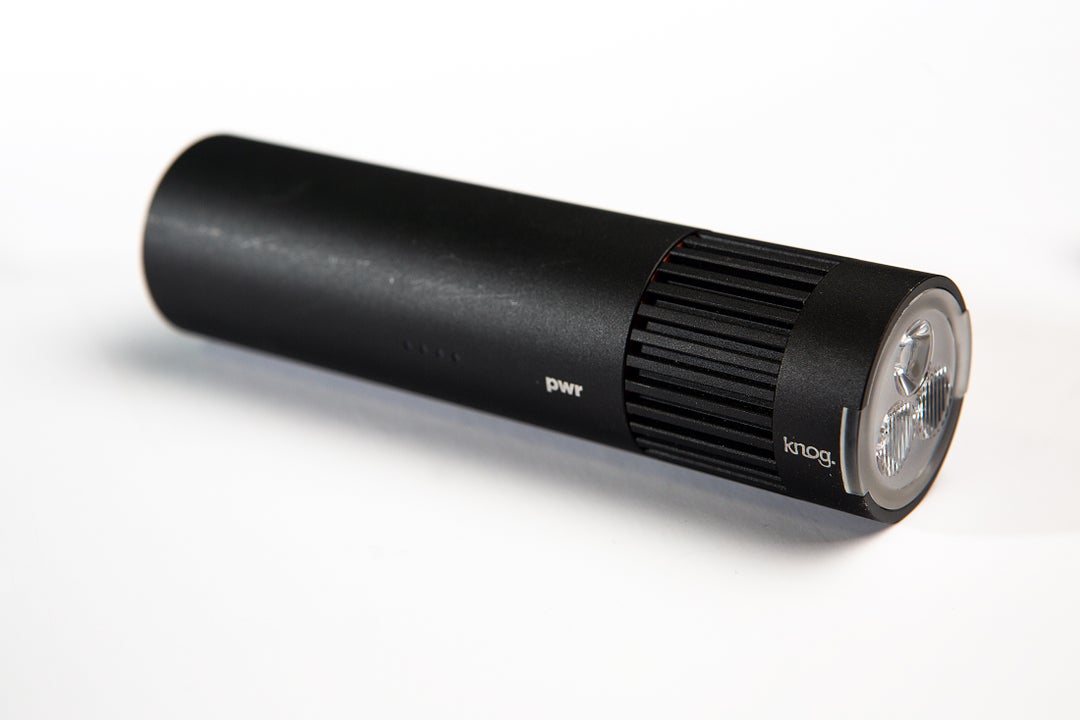 Knog claims the PWR Trail runs for two hours at 1,000 lumens, or up to 300 hours in its eco-flash mode. The light uses an elliptical beam pattern and can be mounted both on top or under the handlebar (under your Garmin). There are no buttons on the light: twist the front portion of the light to turn it on and off and switch between modes. While this makes for a clean design, we’d prefer if you could toggle back and forth between modes by twisting in either direction. With the proprietary ModeMaker app, you can customize the light: select and tailor modes from the menu or control brightness, adjust runtimes, and add new light modes.

There are a few picky points. The mount can get sticky in the channel, making it tricky to slide the light off the mount for storage or when your bike is locked outside the coffee shop. Overall, it’s relatively easy to affix to a handlebar, though you’ll need to insert the appropriately sized rubber insert since the mount does not have rubberized strips. A series of four red lights on the side of the barrel indicates battery life. It isn’t a perfect method, but it’s superior to a system whereby the color of the light, or whether it’s flashing or not, indicates battery life.

For those who want or need a bit more juice or plan to hit the darkest trails, the Countdown 1600 is a great choice. Yes, that number represents the large 1,600-lumen output. There are also 1,200-lumen, 600-lumen, 300-lumen, and pulsing and strobe settings that peak at 300 lumens within their respective cycles.

Blackburn has gone beyond the typical build to create a light that meets standards created by the American National Standards Institute (ANSI). Thus, you can have confidence in the output, run time, water resistance, and other performance claims the brand makes. To that end, the digital display on the back of the light, which indicates exactly how much battery power is left and the mode the light is in, takes all the guessing out of knowing the battery life. That’s a great thing: No longer do you need to remember a pattern of green, orange, and red lights to understand when you’ll be left in the dark. On the Countdown, the battery life indicator actually underestimated battery life in our experience, meaning we had more time left than we thought.

Another small but welcome touch is that you can scroll back and forth between modes using the illuminated, rubberized buttons rather than having to cycle through in a loop. And, no matter what mode you’re in, if you quickly need a blast of bright light, you can enter the Blitz mode by quickly hitting the power button.

The Countdown is made for harsh conditions. That means the aluminum body construction is a bit heavier than the other lights in this roundup, but that comes with its advantages as well. The light meets the IP-67 Standard, which is a techy way of saying it is totally protected against dust and grit and is fully protected against the effects of water immersion between 15 centimeters and one meter for 30 minutes. Of note, if the light is left in the Blitz mode long enough, that aluminum body will get seriously hot.

While the light itself is bombproof, the mount was a bit less impressive. It tended to turn more than necessary unless it was really cinched down. The nut-and-screw style mount system is also much slower to attach than a quick-release style mount. That said, a pull knob allows you to release the light from the mount, enabling you to leave the mount on a bike for quick mounting and dismounting.

The light can also be put into a one-touch “race mode” which enables riders to toggle between high and medium output. We liked this mode when riding in areas where we faced oncoming pedestrian or cycling traffic.

A small indicator light on the top of the barrel indicates battery life: green when you there’s plenty of charge left or red when you’re running low. After the specificity and convenience of the Blackburn, it’s annoying to have it be so vague.

Overall, the construction of the Urban Trooper is great. Its waterproof design provides all-weather reliability (it is said to be submersible up to one meter). The band-style handlebar mount allows for easy on and off, or a quick release allows you to slide the light from the mount. At first, it is a tight fit and hard to remove. Once in place, the mount allows the light to pivot, and a pin prevents the light from sliding off the mount. It’s all very tidy, without the more permanent feel offered by the clamp-style systems of the Specialized and Knog lights.

The impressive Ion Pro RT has even more features and functionality than its already capable predecessor, the Ion 800. First, it has a warmer, wider beam that makes it easier to see the trail.

In high mode, the Pro pumps out 1,300 lumens (compared to the 800 that the aptly named Ion 800 produced) for a claimed 1.5 hours. In the medium-steady mode, the Ion Pro puts out 800 lumens for a claimed three hours, which is twice what its predecessor was able to do at the same brightness. (And the same price.)

The Ion Pro RT pairs with select Garmin units for on-screen control and up-to-date battery status. It is USB rechargeable with a sealed charge port for weather-proofing. A double-click power switch helps eliminate the possibility of accidentally turning the light on — good when storing, traveling, or simply eliminating the possibility of running down the battery in your backpack.

The Pro’s mount is one of the cleanest designs we’ve tested. The large nob allows you to de-tension the mount quickly. Fitting the mount on various size bars is possible by expanding the diameter at the hinge point. Rubberized inserts slide into channels to neatly secure the mount to bar. And the hard-plastic quick release to which the light attaches is robust and easy to use.