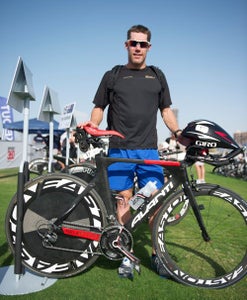 Cameron Brown has won Ironman New Zealand 10 of the past 11 years. He faced a stacked field containing Terenzo Bozzone and Mathias Hecht this year, but, as usual, no one was able to beat the New Zealander on his home turf. Brown posted the second fastest bike split of the day, riding aboard this Avanti Project EVO II. Avanti is not sold in the US, but they are a 25-year old company with a rich tradition in Australia and New Zealand.

The Project EVO II is a brand new bike, and it uses a proprietary stem to attach the aerobar to the fork. The top tube rises behind the stem to fill the gap formed by traditional stems with the goal of reducing aerodynamic resistance. The shift and rear brake housing route through the stem and into the frame. The rear brake is shrouded by the bottom bracket and sits below the chainstays. The Project EVO II uses a standard front brake caliper with external routing. All the tubes are narrow and deep, as is expected on a tri bike these days.

Brown’s Project EVO II is built with Vision Vector carbon 1-piece aerobar with up-turned extensions. His elbow pads are raised with 25mm spacers and the cups are in the narrowest setting to pull Brown’s elbows in toward his body.

The New Zealander has a Shimano Dura-Ace mechanical groupset, including shifters, and derailleurs, but uses an FSA SRM crank/powermeter.

Brown uses an Easton EC90 Aero 56mm Tubular front race wheel. His rear wheel is badged as an Easton, but the hub, bulging section under the brake track and disc surface reveal that it is in fact a Zipp Sub-9 disc. The disc is wrapped with a Schwalbe Ultremo HT tubular and Brown has a Schwalbe Stelvio on the front wheel.

He uses a Profile Design Aerodrink Bracket to mount a bottle between his aerobars and also has two FSA carbon cages on the frame.

Brown races on a Selle SMP Startos saddles, which is built around a philosophy similar to the ISM Adamo, but actually predates the ISM. His spare tubular tire, a Schwalbe, is strapped to the back of the saddle with a CO2 inflator tucked into the tire folds.

Another part of this bike that is foreign to American triathletes is the Keywin pedal system, a favorite of several triathletes from Down Under, including Bryan Rhodes.

Your Bike Mechanic Hates You (But They Don’t Have To)