Garmin and Look/Polar are simultaneously launching an entirely new generation of power meter based in the pedal axle.

After years of rumors, development, cooperation between two companies and a merger by another, pedal-based power meters are finally (almost) ready. Polar and Look teamed up to create the Keo Power system and Garmin purchased tech start-up Metrigear to develop Vector, their own power meter. Both units are scheduled to be ready for sale in the spring of 2012. Garmin’s unit will be released in March and Look/Polar will have them ready in January.

There are a few potential benefits to the pedal-based format compared to the current hub- and crank-based power meters.

First, they can be swapped between bikes without changing a major component.

Third, they provide the power split between the left and right legs.

Fourth, they can measure force produced by the rider that never makes it to the drivetrain. 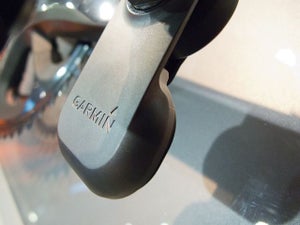 Click here to view a gallery of the pedals.

But measuring power through the pedals introduces complications that crank and hub units do not have to overcome. Power meters measure the deflection of a component and its velocity to find the rider’s power. All flex in the hub and crank is created by power actually directed into the drivetrain. But the pedals are not only flexed when the rider pedals, but when the rider stands on the pedals. The pedal power meter systems must differential actual pedaling power from the forces created by the rider leaning on the pedal or bouncing on the pedals while riding over rough surfaces. The spindles measure force, but force is only part of the equation for rider power. The other component is velocity. To measure actual power rather than force on the pedals mistaken for power, both units use accelerometers in their external transmitters to measure pedal velocity (cadence, which means the rider is actually pedaling), and the transmitter pieces must be fixed almost exactly perpendicular to the crank arm to accurately measure power.

Details about Keo Power and Garmin Vector on pages two and three.

Click here for more from the 2011 Interbike trade show.

Keo Power uses the Look Keo pedal platform with a steel spindle and a standard Look pedal body. Both left and right pedals have strain gauges imbedded in the axle to allow independent measurement of the power created by both legs. Each pedal uses four strain gauges mounted on the spindle and has a transmission unit—the external black piece with Polar written on it prominently—that sends the power data to the computer. Instead of using an open source transmission system such as ANT+, the unit uses Polar’s own system that can only communicate with Polar 500 and 600-series computers. It will not send a signal to the RCX 5 GPS watch. This proprietary transmission system prevents Keo Power from being used in conjunction with the computer of your choice. These black transmission pieces appear to stick beyond the edge of the crank, which would leave them vulnerable to scrapping the road through 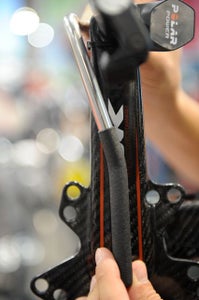 tight corners, but Look maintains that they do not in fact extend beyond the crank arm and they are well protected from road damage.

The battery will last for five months if it’s used 3 hours a day. The system weighs 405 grams and will cost approximately $2,220.

Like Keo Power, Garmin Vector measures power independently in each leg and transmits it to the head unit with an external unit—the silver piece—that must be oriented perpendicular to the crank arm. Instead of fixing the pedal’s rotational position with a wrench, Garmin’s silver transmission unit has a flat surface that forces it into the correct orientation but also prevents Vector from mounting to a Specialized S-Works crank. Another point of differentiation between the two pedal 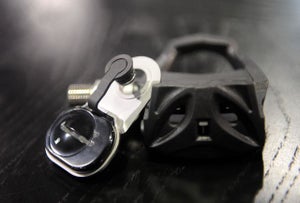 systems is cyclocomputer head unit compatibility. Vector uses ANT+ to transmit data, which is an open standard used by many computers including not only Garmin’s computers, but many of their competitors’ as well. This allows the rider to select their preferred computer instead of being restricted to those produced by the power meter maker. Garmin computers are, however, the only ones that can display the right/left power split between the rider’s legs.

Clark Foy originally developed the technology that became Vector for the start-up company Metrigear that he eventually sold to Garmin. Vector is able to measure the forces applied to the pedal, not just the torque applied to the drivetrain that actually moves the bike, which creates a massive swell of data in addition to the standard power data. Pedaling efficiency is one potential way to use this data and these functions that could potentially be added in the future will simply be software updates instead of forcing the rider to buy new hardware. Vector also uses a Look Keo cleat system, but has an off-brand pedal body rather than a true Look pedal. The pedal comes with cleats and standard Look cleats are also compatible. It will sell for $1,499 when it becomes available in March of 2012.