Click here to see a photo gallery of the E-118.

Argon-18 has been making tri bikes with an integrated front-end since the E-114 was released years before integrated front ends became the standard, and now they have a completely new flagship tri bike—the E-118—with a streamlined aerobar attachment system and dramatically different tube shapes. 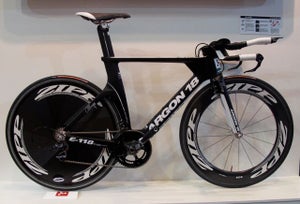 Click here to see a photo gallery of the E-118.

The fork extends up to the aerobar attachment piece in front of the headtube to lengthen the bike and bolster front-end stiffness. The stem piece is completely integrated with the fork and cannot be swapped to adjust fit. The stem can adjust the horizontal position of the aerobars substantiall and the ability to adjust the vertical position comes from the aerobar. The pads can be lifted substantially with spacers and can also be drawn backward toward the rider slightly. The fork itself has a large opening above the tire to allow spinning air to pass through. The strut in front of the headtube is the same width as the headtube and much narrower than the top of the fork blades.

The rear brake and shift housing routes into the top tube behind the stem. The front brake is a V-style stopper that hides effectively behind the fork blades, but the housing swings out into the air. The rear brake is the same style as the front and tucks under the chainstays and bottom bracket. The rear brake housing takes a sharp turn from the frame before meeting the brake and is entirely contained in the frame.

The E-114 had diamond tubeshapes with sharp edges at the widest point of the tube, but the E-118 has rounded tubes. No sharp angles at all. Another substantial change from the E-114 to the E-118 is seatstay shape. The stays on the E-118 are much more slender and are not as deep. The chainstays are quite tall and broad. The top tube is rectangular and the headtube is very deep. The narrow oval-shaped downtube drops below the headtube to fill the gap behind the fork. The seatpost clamp is sunken into a cavity at the rear of the seatpost.

Argon-18 trickled the E-118’s frame shape down to the next level, the E-116, but gave it a more traditional front-end with a standard steerer tube and fork instead of the integrated system. The E-116 has very broad spacers that lift the upper headset bearing above the frame rather than stacking narrower spacers above the bearing along the steerer tube. The fork shape also appears very similar to the E-118’s fork without the extension in front of the headtube.