A steel plate will help prolong the life of the Vector, but if that's not enough new pedal bodies can be purchased for $200/set. Photo: Caley Fretz | VeloNews.com 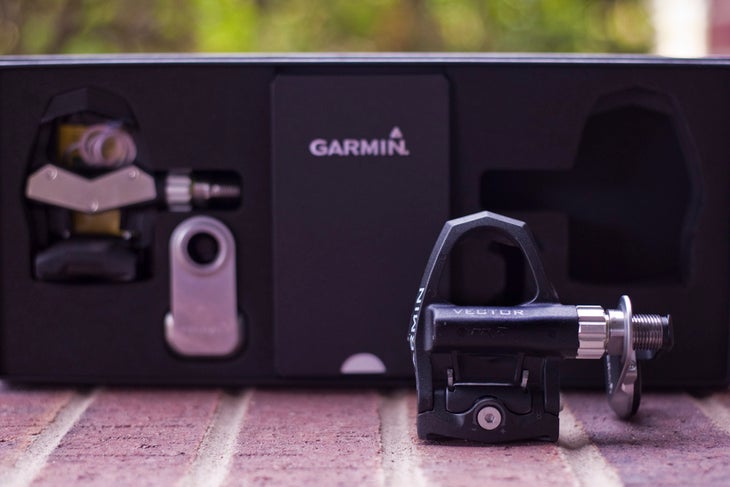 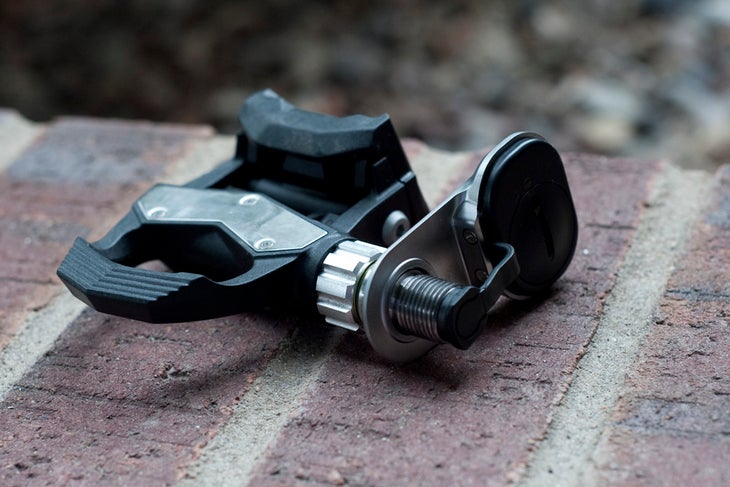 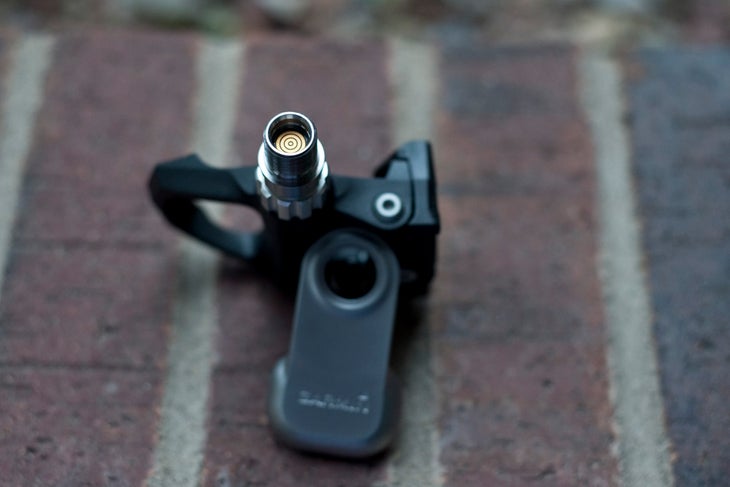 The Garmin Vector is finally here.

It arrives on the heels of half a decade of development, from humble roots as the startup company Metrigear through Garmin’s acquisition and across many broken deadlines.

The Vector spent years as the poster boy for vaporware, the punch line at the end of every joke featuring companies promising much and failing to deliver.

But now Garmin’s long-awaited pedal-based power meter has shaken off that most unwelcome designation. Chic black boxes containing the Vector are headed to shops and distributors now, and consumer availability will begin immediately.

The Vector joins Look’s KeO Power as the second pedal-based power meter on the market, but offers a significant advantages over the Look model — most prominently, an ANT+ wireless protocol that works with all of Garmin’s highly popular head units and a large crop of third-party options.

But Garmin wasn’t shooting for middle-of-the-pack functionality. The Vector claims to offer the accuracy and repeatability of an SRM while adding a host of interesting new features (and the potential for many more) all in an attractive, easy to live with, and durable package. That it is designed to pair up neatly with Garmin’s own popular head units, improving ease of setup and daily use, is icing on the cake.

But does it live up? We mounted one up ourselves and took a spin through the mountains outside Boulder, Colo. to find out.

What’s in the box?

For $1,699 you get two Vector pedals, a set of cleats (Look KeO compatible), two Vector pods (which house the batteries and radios), a tiny ANT+ dongle, and a few small, illustrated manuals.

The Vector pedals weigh 352 grams, including all hardware, and feature eight silicon strain gauges within each spindle.

Not present is a Garmin head unit, which must be purchased separately.

If you plan on using another ANT+ head unit, the little ANT+ dongle will come in handy: plug it into your PC or Mac and use Garmin’s Vector software to change settings and update firmware on your pedals.

As a technical challenge, pedals are much more difficult to gather power from than, for example, a crank or hub. But the placement of the Vector’s silicon strain gauges offers a number of very tangible advantages.

Swapping pedals is a nearly universally understood exercise, and the Vector adds only a minimal amount of time to the normal process. The power pedals will mount on any crank, on any bike: no need to play with BB adapters or worry about crank length. No need to order a specific crank to fit your bike, only to have it not work on your next frame. Only PowerTap hubs offer the same ease of use and universal application; of course, those require that you swap the entire wheel, and perhaps use a wheel not ideally suited to your task (a training wheel used while racing, for example).

With the power meter market quickly filling with a host of viable candidates, across a wide range of price points, any newcomer needs to have its niche. The potential for unique and intriguing data, combined with the aforementioned ease of use, is Garmin’s.

The Vector’s placement on the bike, occupying the most important point of contact between rider and machine, allows it a unique vantage point; a more complete view of a rider’s pedal stroke, if you will.

That future holds host of possibilities for additional data crunching. In addition to features like left/right power balance, which will be available on this Vector version 1.0, Garmin’s engineers hope that the Vector will someday be able to tell you precisely how you’re pedaling, and, more importantly, how it can be improved.

“We want to go beyond watts,” Foy said.

Of course, selling users on what a product might be able to do in the future may not be the best strategy. But Garmin has set up the Vector to be relatively future-proof: firmware updates will be easy, and the technology used in the meter’s sensors is unlikely to be eclipsed and forgotten any time soon.

Garmin claims that the Vector will be accurate within 2%. That’s on par with the rest of the market. But more important than accuracy is repeatability. Will 300 watts on Monday be 300 watts on Wednesday?

Foy says it will. Garmin has built in easy-to-use calibration and zeroing features, including one designed to eliminate the tiny bit of strain left over from unclipping, and has used highly stable silicon strain gauges.

Temperature is a frequent contributor to bad power meter readings, but Garmin says it has solved that problem through a two-pronged approach. First, the silicon strain gauges, rather than the foil gauges used on most other meters. Silicon gauges are “incredibly stable and linear in their response to changes in temperature,” Foy said.

Second, each pedal spindle contains a temperature sensor and is precalibrated to self-adjust as temperature changes.

“We have a temperature sensor inside the spindle and we go through a multi-point temperature calibration process,” Foy said. “The idea is that you don’t need to do anything as a cyclist, we are compensating for temperature in real time. Embedded in each individual spindle is how that individual system behaves to temperature changes.

Pedal-based power systems need to know which forces will translate into forward motion and which are just bending, elongating, or shrinking the crank arm. The latter forces, called radial forces, may be useful to the Vector’s future pedal stroke analysis calculations, but they are irrelevant to calculating power. To determine which forces are radial and which actually drive the rider, both pedals need to figure out exactly what orientation their sensors sit relative to the crank.

Sounds a bit complicated, but initial setup is exceptionally easy. Unlike the Look KeO Power, there’s no need to line up the pedal spindle at a certain angle relative to the crank: the Vector uses its accelerometers to self-calibrate. Simply mount the pedals, plug the Pod (which holds the receiver and battery) into the back of the spindle, turn on your Garmin and go for a ride.

Once you spin over 80rpm for a few seconds, the “installation angles,” as Garmin calls them, are set. On a Garmin 810 or 510 prompts on the screen will remind you to perform the installation angle process — that is, pedaling. Other head units simply won’t show power until you’ve spun the cranks a bit.

The installation angle process only needs to be repeated if the Pods are unplugged or if pedals are swapped between bikes.

Pairing the Vector with a head unit is made easy thanks to the laser etched ANT+ ID number on the spindle.

Crank length is extremely important, and needs to be set when the unit first arrives — the default setting is 172.5, and if you’re riding anything else you need to set the crank length in your Garmin for each bike, just as you’d set wheel circumference.

If you don’t have a Garmin, pull out your laptop and that USB ANT+ dongle and set crank length with Garmin’s app.

Zeroing is performed like most other meters: unclip, tell the head unit to zero the meter, and the process is complete.

For those interested in gathering the best possible data, the tiny amount of strain placed on the pedals while unclipping, and then effectively “saved” by the zeroing process, is removed automatically with a few backwards pedal strokes.

RELATED: Training And Racing With A Power Meter

Pedals wear and even break; they hit the ground on occasion, see lots of foot movement and repetitive forces. Having to throw down $1700 because the top of your pedal wore out would be a bummer.

Luckily, Garmin thought that through. A steel base plate is used on the pedal body and the back end of the Exustar pedals the Vector is built around has been beefed up from its original version.

And if something does go wrong, the pedal body and battery pod can be replaced independently of the pedal spindle, which houses all the expensive technology. The pedal bodies will cost $200 for a set and the pods $70 each.

The pods are placed in such a way that it is impossible to hit them on the ground, though it doesn’t look that way at first glance. Your shoe or pedal will always hit the ground first, regardless of angle.

With only two rides, one with a Quarq power meter side-by-side and one with the Vector alone, it’s impossible to place a final verdict on the accuracy and repeatability of the Vector. Keep an eye out for a follow up once we’ve crunched some more numbers.

At first glance, though, the indicators are good. Over 90 minutes the Quarq and Vector were spit out average wattage figures only 4 watts apart, and they tracked well through hard efforts. The Vector sat just a few watts lower than the Quarq consistently.

The Exustar pedal is nothing special, but it did provide a nice platform, and engagement and disengagement had a positive click. Retention force can be easily dialed up or down with a 3mm allen key; we found that setting the pedals right in the middle was plenty secure even under sprint loads.

Garmin plans to release a mountain bike version next, but would not place any sort of timeline on the project. It would likely be based around one of Exustar’s SPD mountain bike platforms, and would require only “a little redesign of the pod,” said Foy.

A version that’s about half the price—comparable to the most affordable options—is not on the table at the moment. But Foy did note that going the Stages route, using only one side and doubling that power, may be an option in the future.

“There’s no reason we can’t operate as a single pedal, but for who we are trying to attract now, which is high-end enthusiasts and racers all the way to the pros, a full view of the power you’re producing and the repeatable power is what we’re after,” Foy said. “For us, to start out with, that wouldn’t’ have been a great place to go. But as a cost down opportunity, technically there’s nothing that will keep us from going there.”