Well, it couldn’t come at a better time (and let’s not pretend it was more than coincidence): This spring wheel companies have been racing to the bottom—in a good way. Enve’s notoriously top-heavy price list got some much needed foundation with the release of it’s new line of wheels. Guess what the line is called? Yup, Foundation. From a brand that’s always been known as super high-end when it came to their slick carbon products, chopping almost a thousand dollars off their “low-end” wheelset means that a lot more triathletes can now get their hands on something that will make their tri buddies jealous without needing a second mortgage. Similarly, we’ve seen a New Kid on The Block who’s not entirely new to the world, but pretty new to us in the U.S.—British-based Hunt wheels. While Hunt may not be as familiar on this side of the pond, this decidedly modern brand’s staff has a history in the performance wheel world and a heritage in road cycling. As a mark of the times, all of Hunt’s wheels are tubeless (and clincher/tube) compatible and are direct-to-consumer. If some of this sounds a little bit like a wheel-shaped version of Canyon, you wouldn’t be far off base. Swiss Side is also direct-to-consumer, but they’ve been around a little longer, and their mixture of F1 aerodynamics heritage with a budget line makes them an interesting player in the game.

Why These Three Wheels?

Aside from the fact that these three wheels sit roughly in the same price range, similar weight range, and are both available in disc only, all three of these wheels represent a shift in the aftermarket wheel world. While there’s no way either brand could have predicted a worldwide pandemic or could have conceivably pushed up production to meet the current economic demands, finding more features at a lower price on carbon wheels specifically are actually a notable sea change. Oddly enough, you don’t really see bikes getting cheaper every year—in fact, you could argue tri bikes are getting more expensive, despite the fact that triathletes aren’t actually buying from this huge herd of superbikes. To illustrate the point, Cervelo no longer produces a new bike that costs less than $3,000.

You’d think materials would get cheaper, tooling would become more commonplace, factories would become more efficient, etc., but that hasn’t really been the case in the tri bike world. There are some exceptions: a few brands, like Canyon—or an even more extreme example, A2 Bikes—sell direct to consumers to cut costs—and a few brands have introduced lower-end models into their lineups, like Ventum and Dimond. But the big players in the tri bike game, the ones with big lines of bikes don’t seem too interested in creating a cheaper midrange tri bike, for whatever reason. That’s why Enve, Hunt, and Swiss Side and many of the other wheel brands letting their prices drop is interesting. Here, Enve stands in to typify the high-end wheel brand that realized in order to survive, they need to appeal to more customers. Hunt stands in as that direct-to-consumer, modern-tech first, nimble brand who might be coming in to knock the kings off their thrones. Swiss Side is a blend between the two. 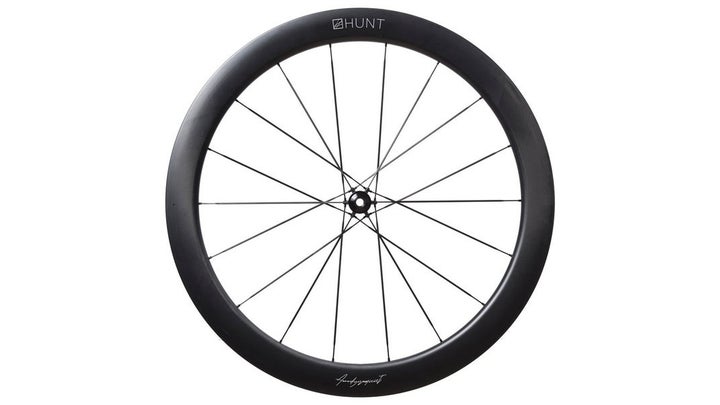 Ok, you see it, and I see it. It’s that price tag. That’s not for one wheel, that’s for both. Even though I’ve written quite a lot about these wheels, I still have to quadruple check that I’m not getting that price wrong. And if you don’t know anything else about these wheels, that price tag is even more important. But it’s what you get for that price that really seems…almost off. For less than $1,400, you get a wheelset in the low 1500-gram ballpark, something that’s quite wide (29mm external, 20mm wide internal), and that doesn’t even account for the crazy-uncommon carbon spokes that lace these hoops. In fact, the carbon spokes alone are enough to give pause, as there are only a few brands that do something similar. Notably Lightweight wheels are in the über-expensive, über-impossible-to-fix-if-they’re-damaged category, while Mavic’s Cosmic Ultimates also cost above $4k and are similarly unserviceable. Mavic does have the R-Sys SLRs with serviceable rounded spokes, but their ride quality (mush) and aerodynamics (huge rounded spokes, right?) trump the fact that they’re “only” around $2k.

Meanwhile Hunt’s wheels are serviceable, just soft enough to be comfy, and don’t even cost 1/10th of an arm and a leg. We loved the super smooth ride of these wheels on small, medium, and large bumps, and although they weren’t the quickest on the windup, they didn’t bog down completely when putting power down to the pedals. They also cornered reasonably well and held decent lines on big descents, but were slightly twitchy in crosswinds. All in all, lots of stuff triathletes need, and not a lot they don’t. The only strange aspect of these wheels—even when tested with numerous bikes—was a slight up-and-down oscillation at high speeds over medium rolling bumps. It was never anything to get concerned about, but it was definitely there. My best guess is that the carbon spokes that deliver such a smooth ride might hit some funky frequency at some speeds. Again, nothing to make me hit the brakes or lose my line, but it wasn’t present on the other two tested. 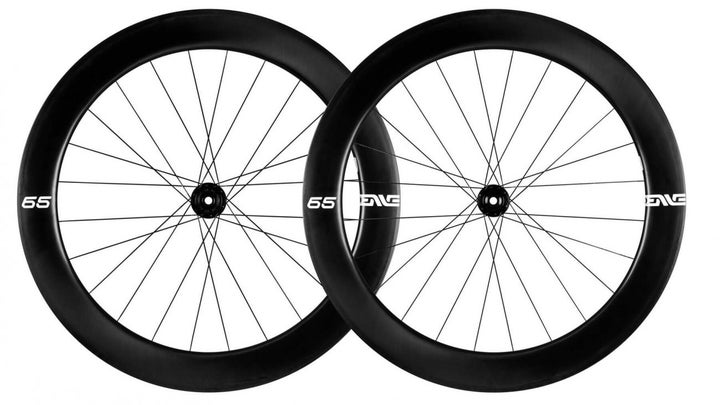 This was a wheelset I was super excited to test, if only because it was Enve’s first venture south of $2,000. Better yet, unlike the other two brands in this face off, they’re still made in the U.S., which right now is not only hard to do, but kind of a big deal to a lot of people. For Enve’s part, they stopped making two different rim sizes/shapes per wheelset to help drop the cost, and they went with a cheaper hub shell and bearing to help shave some pennies as well.

More like the Swiss Sides, there isn’t anything crazy about these wheels, aside from the fact that more people can now start riding Enve’s. Will that mean there will be more Enve because more people have them, or will that mean less envy because they’ll be more commonplace? Who’s to say? Another big boon for this price drop is it allows Enve to get into the OEM game (as we’ve seen on a few new Ventums) and it allows bike manufacturers to capitalize on Enve’s previously premium-only name when spec’ing out their complete builds.

Out on the road, these performed almost exactly how you’d expect a just-under-$2k wheelset to ride—slightly soft, with reasonable response, but great over high-frequency chatter, while just ok over medium and large bumps. In crosswinds they did well, and in corners they preferred stability over twitchiness, no surprise given the 28mm external width rims (21mm internal); very middle of the road in all ways—which is exactly what some people want. The only big struggle here was that for whatever reason tires were incredibly difficult to mount—both tubeless and clincher. Also, you have to be sure you use an Enve-approved tubeless tire that meets their standards. 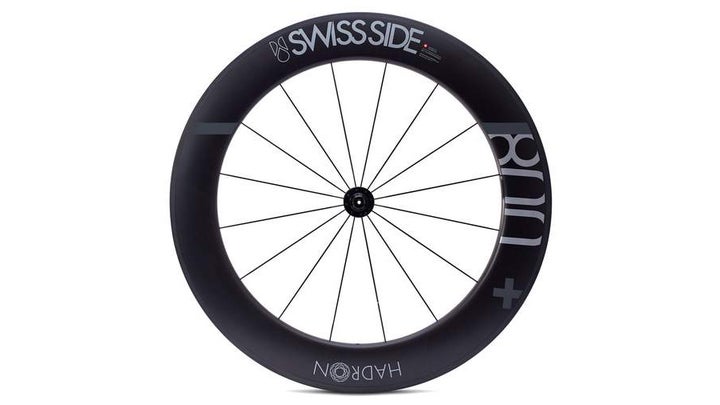 One big thing Swiss Side has that the other two brands don’t? A ridiculous roster of amazing pro triathletes. And while I’m not saying that just because they have fast pros (Patrick Lange, Daniela Ryf, Andreas Dreitz, Daniela Bleymehl, and Jan Van Berkel just to name a few), they have fast wheels, some of those names might ring a bell or two. The crazy thing is that Swiss Side’s most expensive wheels are still under $2,000, so that means you’re awfully close to riding the same pair of wheels as Ryf or Lange. That said, while those athletes may ride on a lighter version of DT Swiss wheels at Kona, you get a good bit of that aero tech in the far cheaper Swiss Sides.

As such, Swiss Side’s heritage is firmly locked into aerodynamics—their founder has a strong background in F1 racing. In fact, Swiss Side actually helped optimize DT Swiss’ super-aero wheelset by looking at the little things like hubs and spokes and interactions beyond just simply the rim. This actually makes sense because the HADRON has the thinnest rim (27mm internal width) and the highest weight, hence the aero focus in places other brands don’t really look.

Out on the road, they were the harshest of the three wheels on both high- and medium-frequency bumps—though not substantially more than the Enves. Over big bumps, the two wheelsets were even. It’s also no surprise that these wound up faster under high torque than the other two wheelsets, likely a side effect of the hubs. In that same vein, the HADRONS were slightly more twitchy in crosswinds than the others, but cut corners very well without being too nervous feeling.

Usually with three wheels that are so close in terms of ride quality, but each with different strengths, it would be hard to pick just one winner, but when it comes to a triathlete’s application, I actually have to go with Hunt. Aside from the fact that they had that odd undulation (and the unknown factor of traveling durability with carbon spokes, don’t forget), it wasn’t enough to make me slow down, but rather just adapt. The smoothness, weight, and price that these wheels excelled at made them a slam dunk for anyone who: A) needs to spend a lot of time in the saddle in one position, staying relaxed and arriving to T2 in great shape; B) still needs to climb from time to time, but isn’t so concerned about super quick high-torque attacks; and C) probably has a lot of other gear they either want to buy or need to buy. If I was choosing the winner from a roadie perspective, I don’t know if it would be the same, but for triathletes who should really be valuing comfort and sustainable power (and a good deal), the Hunts get the nod.