What: This is essentially a fully featured $1,300 trainer with a newly reduced price. It’s got a monster 2,500W power ceiling, an included 11-speed cassette, and real-time speed, distance, and cadence. The WhisperDrive’s cordless design, however, is what sets it apart. Using a self-generating electromagnet, this trainer transmits and receives Bluetooth and ANT+ FE-C signals to control the trainer, without the need for a wall plug.

Pros: The fact that the WhisperDrive doesn’t need a power source is tough to overstate. Run it with your smartphone on the track for a brick, in pre-race transition as a warmup, or on the North Pole. The included mobile app also has custom workouts created and narrated by high-performance cycling coach Murray Healey. It seemed only novel at first, but the voice prompts and text instructions were actually a boon.

Cons: True design snobs may balk at the WhisperDrive’s form, but function was still excellent; the same could be said for the app. The biggest surprise—particularly given its name—was that the WhisperDrive was not terribly quiet. Though definitely less noisy than a wheel-on option, it still generated a fair amount of hum, likely due to its ability to self-power.

This Is For: Triathletes who need geographical setup flexibility and want a boatload of features ready to go, right out of the box. 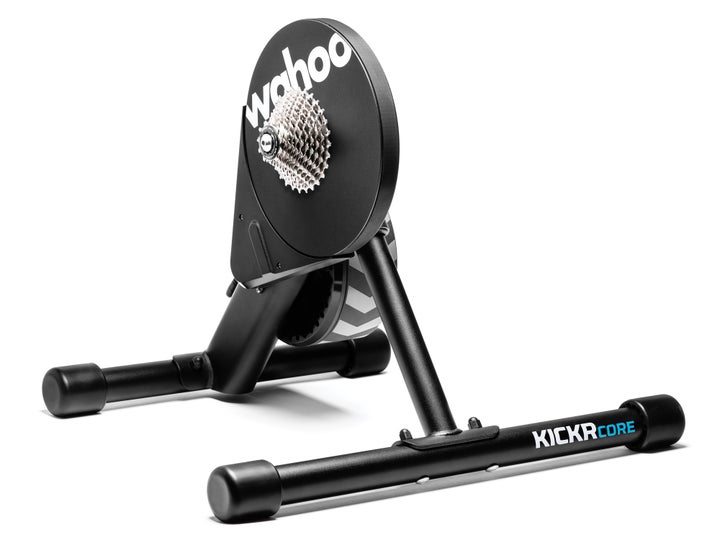 Pros: A stable design paired with an essentially silent flywheel make for a controllable smart trainer that’s ideal for 95 percent of triathletes looking to use virtual training platforms like Zwift, TrainerRoad, and Sufferfest. The resistance changes in response to virtual feedback were super quick, and the solid feel—even while standing and putting out big attacks—was surprising given the CORE’s footprint.

Cons: Without a handle (like its KICKR brother has), the trainer was slightly tough to maneuver, and the legs weren’t super compact for storage. Though the lack of a cassette was expected, having to swap a cassette from wheel to wheel—or purchasing one—made the out-of-the-box convenience level a bit low. Also, when not plugged in, there’s no resistance.

This is For: Triathletes who want a simple, solid, easy-to-use home trainer without too many bells and whistles; people with complain-y neighbors or a family who requires indoor cycling silence.

JetBlack
It’s tough to beat a sub-$1,000 direct-drive smart trainer that can be set up anywhere.

The Best Goal-Setting Apps And Services for 2023