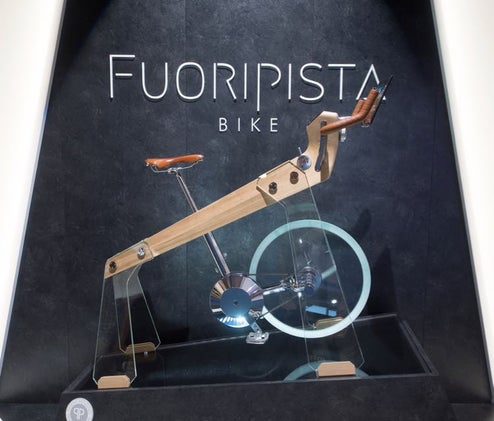 In the category of “so bonkers you could only find it at Eurobike,” we have the Fuoripista, a gorgeous piece of home decor, which you can also work out on. Elite is an Italian brand, selling cycling accessories including a line of smart trainers. They decided to go upscale with this item, working with the Milan design firm Adriano Design to come up with a fully functional smartbike/conversation piece. It has an iPad pro for a screen, a 20-kilogram glass flywheel, and a polished metal resistance unit. It integrates with standard smart trainer apps like Zwift, Trainerroad, and Sufferfest. Pricing and release dates are still being settled, but expected to be in the range of $14,000-16,000USD. 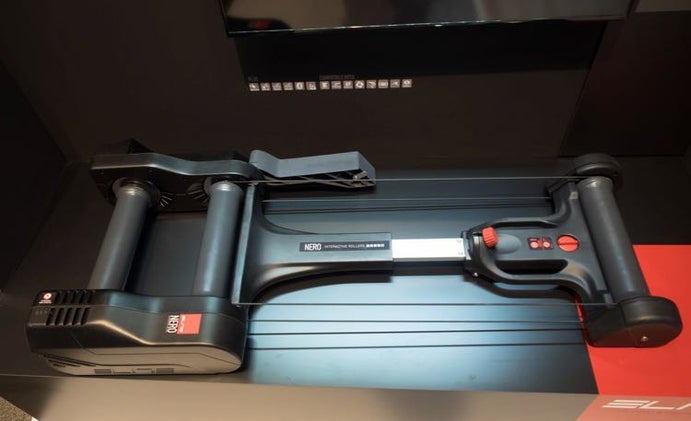 Back on planet earth, Elite has also released a new smart roller with a magnetic resistance unit that can interactively set resistance up to a 7-percent grade for use with standard smart training apps. With two 3-kilogram flywheels, the ability to slide on its base to prevent less-smooth owners from being unceremoniously dumped onto the floor, and a compact size when folded for storage, the $900 Nero is an attractive option for smart training. Available now. 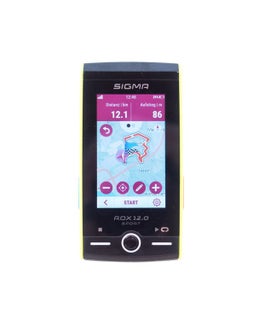 Sigma’s new bike computer, the Rox 12 is bigger and better than its predecessors—featuring a touchscreen and incorporating the existing computer’s robust training features. Following what seems to be the trend among new cycling computers, it packs a punch in terms of navigation features: Sigma has chosen to go with OpenStreetMap (OSM) as a data source for their included maps—potentially an advantage as in certain regions OSM’s data is more complete than competitors like Google Maps. The even better news is that this data is available for free. Sigma has also provided a tidy interface to download the data via either their web portal—when the computer is connected via cable—or via their app on your phone when it’s not, using bluetooth which is slower. However, the big feature is on-device route selection. In just a few clicks you can set up the types of streets you want to follow (or trails, and then you can draw a shape using the touchscreen on the map, and the Rox 12 will calculate a route using your selected street types along the shape you drew. There’s no lag when drawing, and very little as it calculates the route. This allows spontaneous rides, coming only from ideas like “I want to do a large loop through the hilly area out west,” or “I want to ride to the next town by following the coast.”

The Rox 12 will be available in the US by the end of July, and will cost $475 for just the computer. 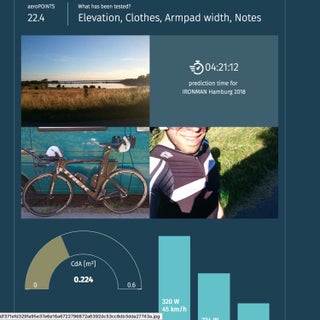 Aerotune is a new startup aiming to help improve your aerodynamics on the bike. Founder Sebastian Schluricke worked many years in the wind energy industry, and he pursued his triathlon hobby on the side. Using his knowledge of wind and aerodynamics, he has developed a more advanced method of calculating the drag of a cyclist from power and speed data. Unlike other methods, which either ignore wind or assume constant wind-speed and direction, Aerotune models the variation of wind-speed across space and time. Another novel feature is that if multiple riders test in the same area at the same time, their data can be combined to gain a more complete picture of wind conditions—which increases accuracy. Aerotune can even provide an estimate of the error in their measurement.

After years developing this technology as a side-project, Schluricke turned this into a product, and the result is an app and website which guide the user through the process of testing different setups to see which is faster. The site also allows users to connect with others, compare test results, and see which gear is fastest. Pricing models are still being developed but for the moment limited testing is free, and monthly access to the full version costs around $55USD, while annual access is around $230USD. 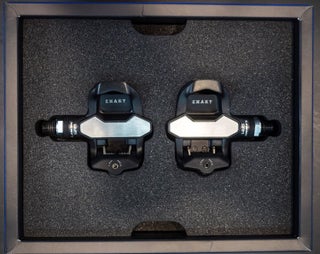 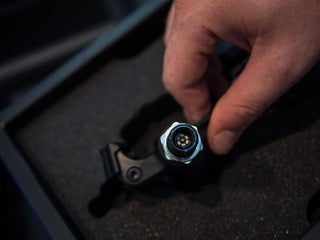 SRM is finally jumping into the pedal-based power game with the EXAKT pedal—based on a partnership with LOOK and LOOK’s Keo pedal. Key differences to other pedal-based power meters include SRM’s usual high precision measurement—courtesy of four strain gauges per pedal— that they claim is as accurate as their crank-based meters. the EXAKT also measures pedal rotation to provide the user with cadence data—where other models estimate cadence based on accelerometers. Unlike SRM’s crank-based meters you are not required to perform a zero-offset every ride, and they do not need to be sent back to the factory in Germany for calibration. The pedals’ batteries—which should last 100 hours of riding—also do not need to be replaced, but rather charged via a port hidden on the crank-side of the pedal axle (pictured above). The pedals are currently shipping, and while US pricing is not yet set, the European pricing should be indicative. EU prices are €799 (around ~$900USD) for a single pedal, €1399 (~$1600USD) for two pedals, and €2179 (~$2500USD) for a bundle including two pedals and a PC8 computer. 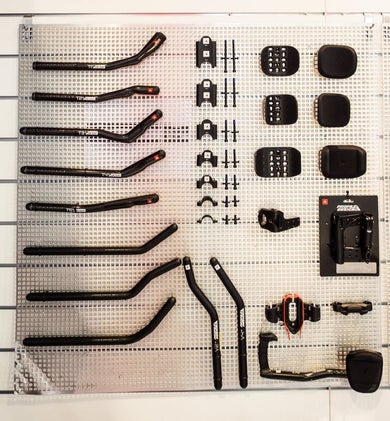 Profile design has revamped their extensive lineup of aerobars. Driven by the increasing numbers of athletes going to get professional bike fits, they’ve refocused their lineup on giving fitters the tools to get athletes in the correct position. Working with Kiwi bike fitter David Bowden, they’ve reduced the number of different bars and clamps they offer from five to three. By increasing the flexibility of how each part can be set up, they have been able to widen the range of positions possible. If your local bike fitter can give every athlete a good fit with a small amount of inventory, then both fitters and athletes win.

The new product line consists of the Sonic (strandard), Subsonic (low stack), and Supersonic (high-end) aerobar clamps. There are three new aero extensions, named the 35A, the 45/25A, and the 55A. The 35A aluminum barsn have a 35 degree upward bend at the end;  the 45/25A have a 45 degree upward bend, followed by a 25 degree bend back to horizontal; and the 55A have a simple upward bend of 55 degrees. Their new elbow rests are named “Ergo” and “Race,” the former has standard cups, and the latter is quite deep. The full combination of products have therefore very specific names, for example “Supersonic Ergo 35A,” letting the user know which components make up the full bar. For now the aluminum lineup is being replaced, and the refresh of the carbon products will follow in the 3rd quarter of 2018. 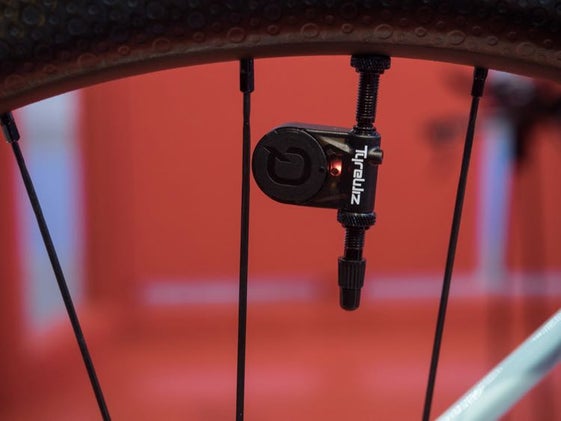 Last year, Quarq released a product for mountain bikers known as Shockwiz that monitors the pressure inside a shock as you ride to give recommendations on tuning to the rider. Having already done the hard work, they thought, “Why not apply the same principle to tires?” So they launched the Tyrewiz in 2018. In principle it’s a pretty simple device—a valve extension with an attached pressure monitor, some LEDs and bluetooth communication to talk to your smartphone or Garmin (integration with other head units is on the way). Pair the sensors with your smartphone and set the range of pressures that are acceptable for your bike. Then, all you need to do is pump your tires until the LED on the unit turns green—if you pump too high it will turn flashing red. The key use case for triathletes may be at races where your bike has to be left in transition overnight—the Tyrewiz would take the guesswork out of topping up tires with a small hand-pump on the morning of the race. At 10 grams for each device they are also quite lightweight. The Tyrewiz comes in at a somewhat steep $200, and is available immediately. 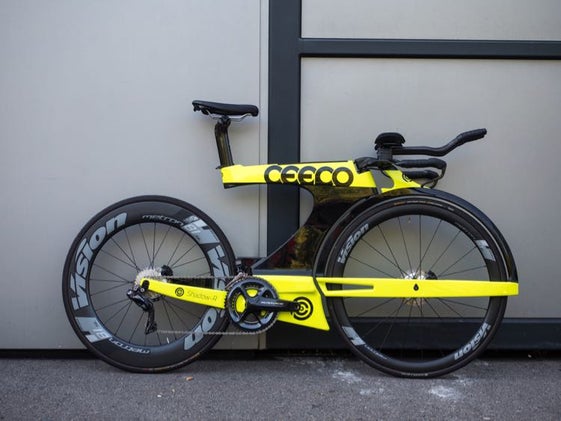 In typical Ceepo fashion, this brand  has come out with a very unconventional new bike. The Shadow-R is a drastic update to their existing Shadow frame—replacing the fork with something perhaps never before seen. The new fork takes the shape of a semi-circle, surrounding the upper half of the front wheel, in a aerodynamically shaped carbon structure. A beam connects the bottom of the semi-circle and the front wheel rides on a through axle passing through the beam. The whole construction serves to partially shield the front wheel in zero yaw conditions and as a result Ceepo claim the bike is substantially faster when the wind is straight on, losing out slightly only once yaw goes past 5 degrees. A quick test ride showed that while the extra mass in the steering was noticeable, it seems unlikely that it would be bothersome after a ride or two, and Ceepo confirmed that their long-term testers had no issues after a short adaptation period. The Shadow-R will be available in medium and large sizes in October for their Kona athletes, and the size small will be available by late November. 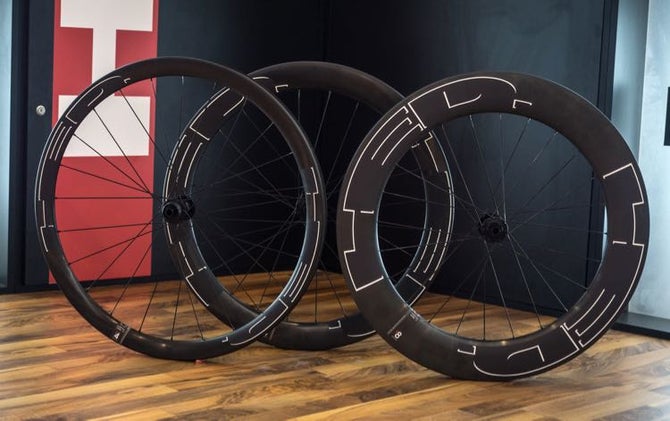 Last year, HED finally launched its first carbon clincher. Also in 2017, they released the Vanquish 6, a wide-rimmed disc-only aero wheel. This year, they have rounded out their lineup, releasing the Vanquish 4  and 8, shallower and deeper wheels respectively. Why disc-brake only? HED don’t believe that rim braked carbon clinchers are safe for all riders in all conditions and prefer to steer away from the concept. As wider wheels, the Vanquish could be interesting for an athlete wanting multi-discipline race wheels. With a 21mm internal rim width, they can comfortably handle 23mm wide tri-tires one day, 25mm road racing tires the next, and 35mm CX or gravel tires in the off-season. The full Vanquish lineup is available now, and costs $2500USD for a pair of the 4 or 6 wheels, and $2700USD for a pair of Vanquish 8s. 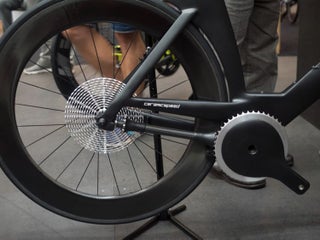 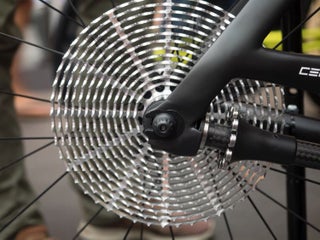 CeramicSpeed has continued its quest for even more ways to make a faster bike. With their UFO chain, they figure they’ve taken the cog and chain system as far as it will go, in terms of efficiency. Their new concept removes all sliding motion with a system that relies on gear-like metal wheels in place of a chainring—rotating on a driveshaft via a gear made of bearings. At the back-end, the system is repeated—bearings on the driveshaft drive a toothy metal ring. The advantage of this system is that unlike a chain, there is no point in this system where two metal surfaces slide across each other. Every contact point is rolling, and this lack of sliding is peak efficiency. CeramicSpeed claims that such a system will have half the losses of a well set-up chain system. Other advantages are the narrower width of the system, so the rear wheel can be made more symmetric and thus lighter. The whole concept is in very early prototyping, with more development necessary, but they hope to partner with a bike manufacturer who will incorporate the concept into a production bike. 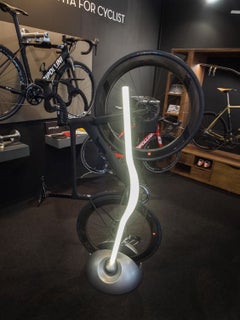 No European event is complete without gratuitous modern design—introducing Vadolibero, a luxury interior design firm focused on the bicycle. Their product line includes various pieces of furniture, intended to store and showcase your bike as a work of art. New for Eurobike is the Vertik, a lamp which also stores your bike. The lamp is a strip of lights in the shape of a handlebar (also conveniently Vadolibero’s logo), turned vertically, which also holds your bike pointing toward the sky. The base swivels to allow entry and exit of your bike, even if the lamp is placed in a corner or against a wall. Vadolibero products are available in the USA from R&A cycles in Brooklyn, and the Vertik costs €1950, or about $2300.