At first glance, the Cervélo P5X appears to be an outlandish superbike, with its exotic frame design, disc brakes and integrated front end. But a deeper inspection reveals a workhorse, built with a level of practicality that’s not immediately apparent, especially if you peek at the price tag. The P5X is first and foremost a problem solver, designed to meet the specific needs of triathletes, unlike its predecessor that had to pull double duty as a time-trial bike. Unencumbered by the same design restrictions that applied to the P5 (as this is certainly no time-trial bike), Cervélo engineers were free to start with a blank slate to create a bike that’s as functional as it is fast. Words like practical and functional aren’t normally associated with bikes that cost $11,000 (for the “cheap” build), but think about the P5X as a new technology platform that will hopefully trickle down to more affordable future models.

The engineers at Cervélo said the P5X took more than three years to design, but it’s worth noting that this bike has a striking resemblance to the Cervélo Barrachi that Gérard Vroomen and Phil White designed in 1995. The P5X was originally scheduled to launch in the spring of 2016, but as is often the case with new technology, there were delays. The last few years have seen a rise in the development of bikes that ditch traditional frame design from brands like Dimond, Ventum and—most recently—Diamondback, making it a very exciting time to shop for a triathlon bike.

Cervélo’s primary goal was to create the ultimate triathlon bike. The seven goals below were conceived by the design team and are listed in order of their importance:

Compatible with round bottles

Easy to fit the athlete to the bike

Easy to adjust the athlete’s position after initial setup

Same stiffness as the P5

Easy and safe to pack

The first step of the design process involved data mining to gain the most accurate view of how triathletes were outfitting their bikes on race day. So Cervélo engineers traveled to Ironman races and took 14,500 images of athletes on course. An analysis of these images revealed some noteworthy trends like gels taped to top tubes and traditional round water bottles mounted all over the bike. This analysis led to the first and second objectives in the design goals: Create a frame with easy to access storage compartments capable of fueling an athlete for a full Ironman distance race. Making that objective the top priority was a paradigm shift for Cervélo, a brand traditionally committed to making top-of-the-line bikes faster, even if it meant sacrificing convenience.

The P5X has enough storage for a ride across the country. That statement may be an exaggeration, but it can easily schlep everything you could possibly need for a 112-mile ride. The Smartpak is a nutrition storage compartment that sits behind the stem on the top tube. The majority of space of this two-level compartment actually sits inside the frame and has enough room to fit several bars and a handful of gels. There’s even a pill tray that will prevent your salt pills or ibuprofen from rattling around. The Smartpak is removable if you prefer short-course racing and don’t need the additional storage. 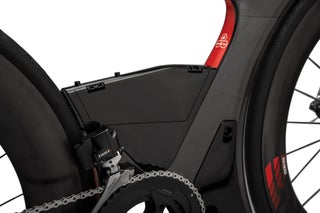 ke. You can mount a water bottle to the top of the Speedcase and thanks to the frame design, a traditional round bottle won’t cost you much in terms of an aero penalty. If you don’t want to use the Speedcase, you can attach a bottle cage directly to the frame.

Unlike the Speedcase, the Stealth Box is integrated into the frame and exists in the space between the crank and front wheel. This is where you’d likely store flat repair items like spare tubes, CO2 canisters and tire levers. You could remove the Stealth Box and have access to storage all the way up the downtube of the frame. This would be a great place to stash a rain jacket or a warm pair of gloves in case the weather turned foul on a ride.

There are three locations to mount bottles on the P5X: between the aerobars, on the downtube and behind the saddle. The bike comes with these mounts already in place (cages not included) so there’s no need to purchase an aftermarket hydration system, unless you want to run a more aero setup like the XLAB Torpedo Versa. The mount behind the saddle is fully adjustable, allowing the rider to customize the angle of the cage.

Cervélo partnered with ENVE to create the fork, basebar and extensions. Perhaps our favorite feature of this entire bike is the ability to adjust the stack of the armrests thanks to a component that works just like a seat post. All you need is a 4mm Allen wrench and you can raise or lower a post that slides in and out of the frame, allowing 112mm of vertical adjustment. This is a huge deal for triathletes who constantly tinker with their fit. Making this kind of adjustment on other superbikes (including the P5) has the potential to turn into a monumental task. The ENVE extensions that come with the bike have an upward bend, but if you want to make them even higher in relation to the armrests, you can adjust the pitch up to 12 degrees.

The basebar can be mounted with the bars swooping up or down depending on whether the rider wants a more comfortable or aggressive hand position. But the real story on these bars is that they have the ability to split in half, making the bike easier to travel with, especially if you purchase the custom Biknd case (more on that later).

In addition to partnering with ENVE for the front end of the bike, Cervélo forged a relationship with HED Cycling to produce the frame. The Minnesota-based company has long been known for its carbon expertise, but the P5X is the first frame HED has ever brought to market. Look closely at the bike and you’ll see a beautifully finished unidirectional carbon frame free of imperfections.

Cervélo’s internally developed stiffness test revealed the P5X to be 25 percent stiffer at the head tube compared to the P5. This improvement can be attributed to the one-piece monocoque frame design and thru axles in the wheels. The P5X is slightly heavier than the P5, but only by 13 percent when the bikes are weighed with everything you’d carry in an Ironman. When you consider this bike wasn’t intended to be lighter than the P5 (weight wasn’t even a consideration on Cervélo’s list of primary objectives), 13 percent is pretty commendable.

In the wind tunnel, the P5X tested faster than the P5 at every yaw angle except +15 degrees. The P5X was also faster than every other bike Cervélo tested, which included some of the most popular models on the market. Testing was done at the San Diego Wind Tunnel, where Cervélo engineers spent an estimated 180 hours.

The P5X will be offered in four sizes: SM, MD, LG and XL. Each size has a wide fit range thanks to the massive amount of adjustability offered by the sliding post on the aerobars. Cervélo developed a sizing tool on its microsite to help consumers determine their size based on fit coordinates. Whether you like to ride long and low or short and high, there’s a good chance the P5X can accommodate you.

How does it ride?

When you first look at the P5X compared to a traditional double-diamond bike, it’s natural to think there must be some inherent flaw with the “beam” design. Why haven’t more bikes been designed this way if it truly yields a stiffer and faster machine? First, Cervélo engineers cringe when you call it a beam bike. Softride is an example of a beam bike that was intended to flex at the seat post junction. This is not the case with the P5X. The one-piece monocoque frame is actually stiffer than the P5 at the head tube and bottom bracket. At the seat post junction, an average rider may experience about 1mm of flexion, which isn’t perceivable out on the road. Despite our best efforts to feel the flex of this bike, it remained stiff over rumble strips and through rough corners. You feel connected to this bike instantly. After two test rides in the relentless winds in Kona, we were able to appreciate the speed and stability of the P5X. 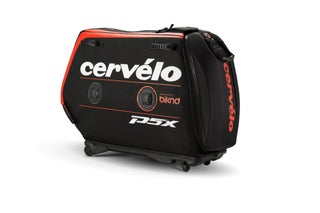 In order to make the bike easier to travel with, Cervélo partnered with bike case manufacturer Biknd to design a custom case for the P5X. The bike mounts directly to an internal frame in the case and is protected by two inflatable airbags. The case can hold two sets of wheels and comes with everything you need to safely pack the bike, so no need to steal towels from your hotel room. Once you are familiar with the internal strap system, you could pack your bike in about 15 minutes. There’s also a storage compartment to stow a wetsuit, helmet, shoes and any other gear you don’t want to pack in your suitcase. MSRP is $849.

The P5X will be available in two build options: the SRAM eTap model with ENVE 7.8 wheels has an MSRP of $15,000 and the Shimano Ultegra Di2 model with HED Jet Plus 6 and 9 wheels has an MSRP of $11,000. Those prices may seem outrageous and will put the P5X out of reach for the vast majority of interested triathletes. But like most top-level tech, there’s usually a trickle-down effect. Just how Cervélo plans to downstream the innovations on this bike is unclear, but hopefully we’ll see some more affordable models from Cervélo in the years to come.

If You Don’t Get A Pre-Fit, Your Next Bike Purchase Could Be A Huge Mistake