Can one bike play the role of road bike and triathlon bike?

As the bicycle specialist at the A2 Wind Tunnel (Editor’s note: Giraud has since left A2 and now works with Blue Competition Cycles, rideblue.com) in Mooresville, N.C., I repeatedly see that a dedicated triathlon bike generates significantly less aerodynamic drag than a traditional road bike, but that performance benefit comes with a sacrifice. Tri bikes are not well suited to riding in a group of cyclists or on sketchy roads, so an athlete either has to own two bikes or compromise between race-day speed and training-day functionality. 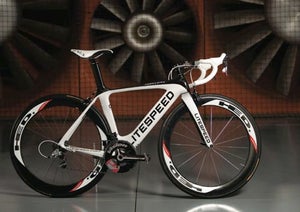 Click the image to view the related photo gallery.

A new generation of road bike has emerged with aerodynamic tubes, a design feature that is typically reserved for triathlon bikes. The idea behind this style of bike is to combine the functionality of a road bike with the straight-line speed of a triathlon bike. If you are looking for an all-purpose bike that is equally suited to a Saturday morning group ride and a Sunday morning triathlon, this new generation of road bike might be the answer. These bikes ride just like a typical road bike but the question is: How much aerodynamic performance do these aero road bikes sacrifice compared to a truly dedicated triathlon bike?

PHOTOS: Can One Bike Do It All?

To answer that question, I compared the aerodynamic drag of four different bike-and-rider setups. The bike itself generates a significant amount of aerodynamic drag, but the rider’s body creates most of the wind resistance, and a key difference between road and tri bikes is the geometry. Triathlon geometry helps a rider achieve an aerodynamic and comfortable position, so I tested both road and triathlon-style positions. The bike-and-rider combinations I tested were:

1. Traditional road bike with standard road components with a rider in a road position and a standard cycling kit.

The first test measured the aerodynamic drag of each combination in the A2 Wind Tunnel. Both road positions were identical and both triathlon positions were also identical.

The graph shows the drag differences between the bikes and positions tested in the conditions (see Fig. 1 below). The wind sees the bike, components and rider as one complete system, so the drag savings cannot be attributed solely to the differences in position or equipment.

The results show that the standard road bike and position has dramatically more aerodynamic drag than the aero road bike and road position. The difference between the two triathlon-position setups, however, is much smaller.

Data collected in the wind tunnel provides reliable information, but triathlons aren’t contested in a wind tunnel. To measure how these aerodynamic differences translate to speed when riding on a road, I conducted a riding test on two Nascar tracks. The cyclist rode at a specific power level over an identical course in all conditions and I measured his average speed. These tests were run several times over several months under varying conditions, and the data was averaged for the results below. In the end, the graph shows the results to be on par with the tunnel testing (See Fig. 2 below).

Triathlete.com Poll: What Kind Of Bikes Do You Own?