Click here to view a photo gallery of the wheels.

Gone are the fairings. Gone are the borrowed rim shapes. Gone are the older construction methods. They have been replaced by structural carbon rims, single-piece carbon clinchers and ultra-wide rim shapes that key off the aerodynamically-validated design trend set in motion by Zipp and HED laced to hubs built in collaboration with DT Swiss based on their 180 and 240 hub platforms. These wheels are serious hardware. 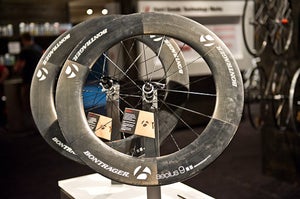 Click here to view a photo gallery of the wheels.

Bontrager is using this new rim design philosophy to completely overhaul their wheel line for 2012. In the coming months, they are releasing the Aeolus 3 tubular, Aeolus 5 tubular, Aeolus 5 carbon clincher, Aeolus 7 and Aeolus 9 tubular wheels based on this technology. These wheels are constructed with rims 35mm, 50mm, 70mm and 90mm in depth respectively and priced at $2,300 for tubular wheel, $2,700 for clinchers. Clincher models for the 3, 7 and 9 depths to follow.

The 2012 Aeolus wheel line vaults into the rapidly expanding upper echelon of aero wheels constructed with rims that are truly aerodynamically refined, not simply deep-dish. These rims are similar to the aerodynamically proven wheels from HED and Zipp. It’s clear that the Aeolus wheels are intended to go head-to-head with Zipp’s Firecrest wheel line. Bontrager, in fact, created a display comparing the rim profile of their Aeolus 5 tubular wheelset with a Zipp 404 Firecrest rim. Like the Zipp Firecrest rims, Bontrager’s rims are extremely wide at the fattest portion—27mm for the Aeolus 9—and taper slightly toward the brake track and have a blunt interior edge of the rim. Bontrager touts the ability of the blunt rim’s internal diameter to produce small quantities of drag at the rear segment of the wheel that also contributes greatly to the wheel’s total drag.

Bontrager claims their wheels create less aerodynamic drag the wheels from a “competitor” with similarly deep rims. The graph they produced to make this claim is based on the average drag created by their wheels and the “competitor’s” from 0 degrees of yaw up to 20 degrees. Although this claim must be verified by others to declare one wheel aerodynamically superior to the others, Bontrager has wisely applied the recent advances in aero rim shaping and have tweaked this basic structure in a way that they claim further reduces drag.

The clincher and tubular rims are laced to two different hubs Bontrager designed and built along with renowned hub maker DT Swiss. Both hubs have flanges that allow the spoke heads to stack on top of each other rather than side-by-side, which allows the spoke heads of the straight pull DT Aerolight spokes in the rear hub to be positioned with a wider bracing angle adding lateral stiffness to the wheel.

The hubs used in the tubular wheels are based on DT Swiss’ star ratchet freehub engagement mechanism found in their all-new top-shelf hub, the 180. They have a carbon hub shell and steel bearings. According to Bontrager, the low RPMs experienced by a bicycle hub dictates that bearing seal construction, not the bearing balls themselves, is the best part of hub bearings to alter to reduce rolling resistance. Following this philosophy, these hubs use steel bearings. The hub bearing preload cannot be adjusted. The hubs used for the clincher wheels have an aluminum shell and use DT Swiss’ 240 hub internals.

To drill the spoke holes in the rims, Bontrager uses an automated robot they have named Buzz. This machine is able to drill spoke holes that are aimed directly at the section of the hub flange the spoke threads through instead of the center of the wheel. This precision reduces stress risers on the rim’s spoke holes and the nipples themselves by preventing the spokes from being torqued when the wheel is tensioned.

All tubular Aeolus wheels will sell for $2,300, carbon clinchers will be $2,700. The clincher wheels will be built with

Aeolus 3: 1175 grams, available this fall in tubular only.

Aeolus 7: Tubular version will be ready around Christmas time. No production rims have been completed yet so Bontrager doesn’t yet have a weight.

Aeolus 9: Tubular will be available in the fall, weighing 1590 grams, and clincher will follow next year.