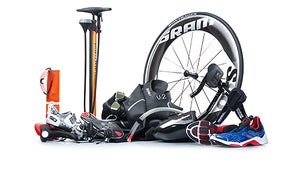 Here’s a question that I have researched with little success.  I read repeatedly that the higher tire pressures cause a tire to “bounce” which actually make it slower.  For years I have been using Vredestein Fortezza SE tires which have a max of 160psi.  For training, I use 120 to 140 but for races I go to 160.  I always feel faster with the max pressure.

So I tried an experiment recently.  I went to a nearby hill, marked a stopped/starting point, and just rolled down, marking my finishing point.  I did 8 rolldowns with 160, 120, and 40 psi.  My max speed was 28mph plus/minus 1 mph each time.  And my stopping point was nearly the same, just 10 yards shorter at 40psi.  I made it to the top of the next hill each time, about 2 city blocks total.  No wind and aero position each time.

I’m mystified.  I know rolling resistance should be more with the 40psi and it certainly felt like it for the 2 miles to home but shouldn’t the max speed have been affected?  How does tire pressure affect rolling resistance?  Am I faster with 160psi or is it a placebo effect?

Good question. The most basic answer is yes, tire pressure influences rolling resistance, but higher is not always better.

Since the roads we race and ride on are rough, although only subtly, the tire must be able to deform to the tiny bumps in the road. If the tire is excessively inflated, as you mention, it will skip the rider off the pavement. These little jumps lift you vertically, which turns pebbles in the road into tiny hills and consumes energy, slowing you down. It has the same effect as climbing millimeter-high hills over and over again. The jittery sensation that comes from a tire inflated to a high pressure, such as 160psi, creates the feeling that the rider is “in contact” with the road and deceives many cyclists into thinking he or she is faster on an overinflated tire. If you were racing on a perfectly smooth surface, over-inflation wouldn’t be a problem and a tire inflated to a higher pressure would actually roll faster than one at a lower pressure. Because of this fact, track cyclists ride very high tire pressures, but a road is not the same as a varnished wooden track.

Although I don’t know perfect pressures for every road surface/rider combination, pressures ranging from 100psi to 135psi tend to be best. If you get the chance, pre-ride the bike course for your next race and try to judge to relative roughness of the road. If it is rougher than usual, 110psi might be appropriate. If you will be racing over a smooth road, 130psi is probably faster. 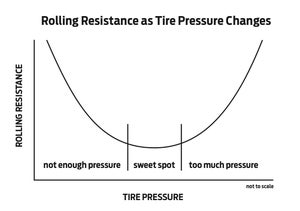 -A supple tire tends to have less rolling resistance than a stiff one. The tire deflecting to absorb those little bumps in the road surface creates resistance, and differences in tire construction, casing and shape can have a significant influence on its rolling resistance.

Now, why didn’t your roll-down test show a difference between 120 and 160psi? Probably because the variables in your test added up to a greater change in resistance than the differences in pressure.

You hit a max of 28mph during your test while in the aerobars. Bicycling Science, by David Gordon Wilson, says a rider/bike combo with a “Racing bike, rider crouched, tight clothing” has an approximate CdA (coefficient of aerodynamic drag multiplied by frontal area) of .32 m^2. The book states that this hypothetical rider uses 176 watts to overcome aerodynamic drag when riding at 22mph. Using the formula for power required to overcome aerodynamic drag (power= ½ * CdA*air density*velocity^3), we can calculate that you were consuming about 343 watts to overcome aero drag at 28 mph, assuming your coefficient of drag was the same as the example in Bicycling Science. If you were to adjust your position slightly and reduce your CdA from .32 to .31, the power to overcome aero drag at 28mph drops 10 watts. If a 1mph head wind were to pick up during your test, your power would increase by a whopping 40 watts. These differences are so small you might not even notice, but they can completely alter the results of your test. That’s not to say roll-down tests are useless, but they are definitely subject to error.

Although you are almost certainly slower with 40psi in your tires than with 160psi, chances are you are also slower with an inflation pressure of 160psi than you would be with 110-130psi.

A general rule of thumb when selecting tire pressure is to pump your tires as high as possible without creating that rough, jittery sensation.

A Triathlete’s Guide to Getting Started with Fat Biking